This review is about the complete lineup of the full-size Officina pens designed by Giuliano Mazzuoli and made by the Italian company that bears his name. In an insert that accompanies the pens, Mazzuoli says that the design of the pens was inspired by the hand tools he encountered as a boy in his grandfather's bicycle repair garage in Italy. All the pens are made from solid bars of aluminum, with chrome finish. The original lineup had six models, each named after a different hand tool: micrometer, end mill, thread, marker point, reamer, and tap: 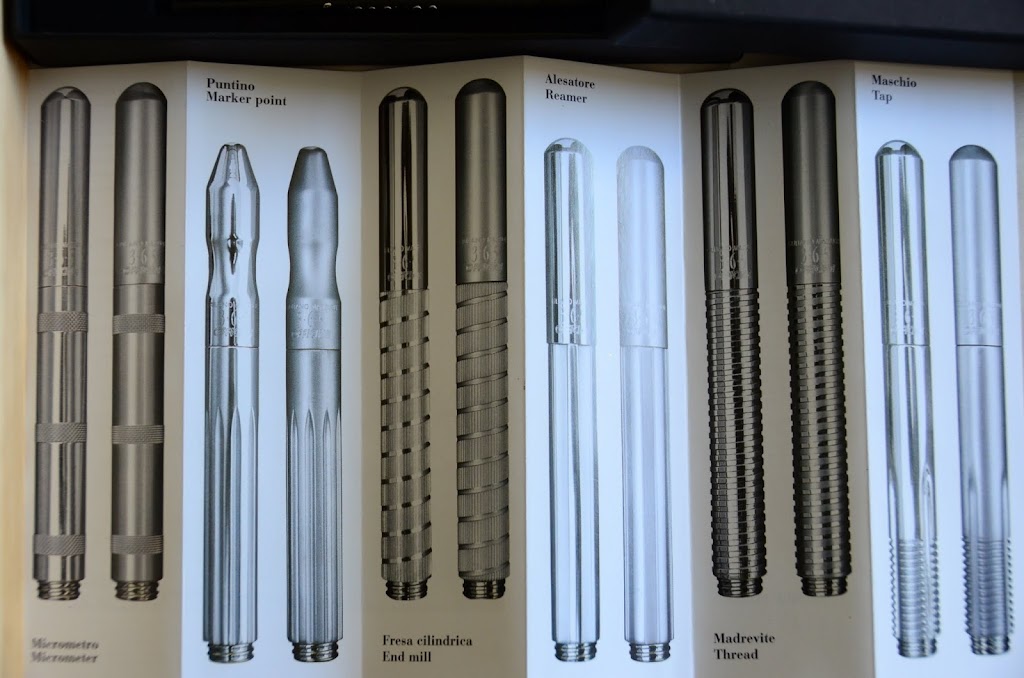 
Further, in accordance with the hand tool design motif, the pens came without clips on their caps, and were packaged in wooden boxes just like old-time hand tools. I half-expected to see straw packaging inside! 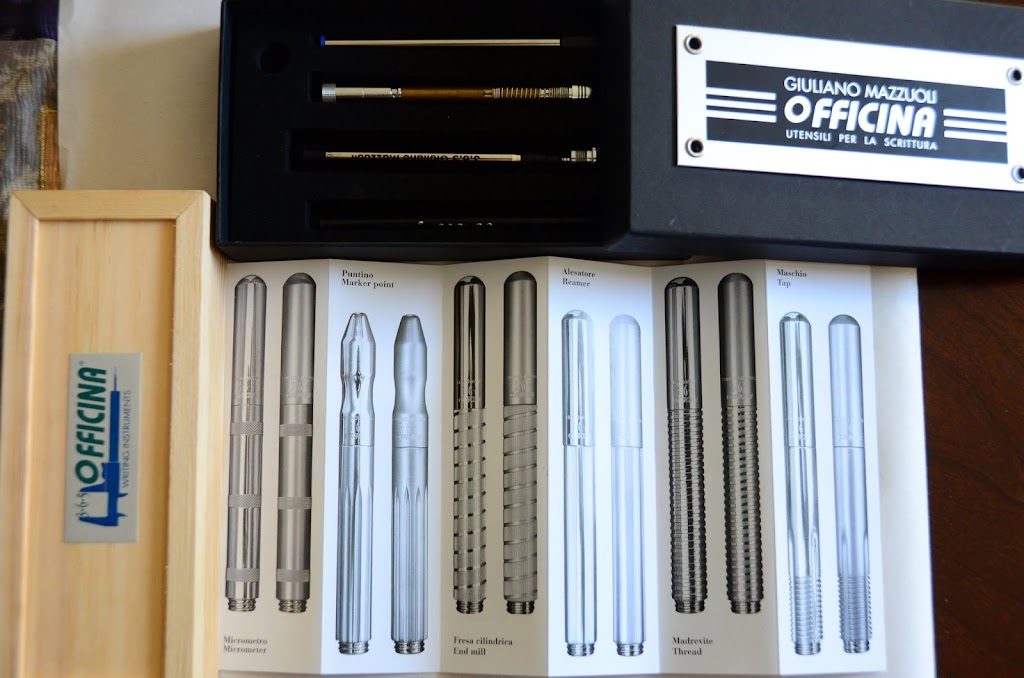 The wooden box for an individual pen is at the bottom left. The top right shows a "Quattro Tempi" box of the old style.

Later came a multi-pen version called the "Quattro Tempi" wherein the fountain pen section could be swapped out for a rollerball section (with rollerball, ballpoint, and fineliner refills provided) or a graphite lead holder (leads of different colors provided). For the graphite lead holder use, the bottom of the barrel needed to be unscrewed. This makes the barrel of the Quattro Tempi "pen" different from the fountain pens shown above, whose barrels are not open at the bottom. Also, the Quattro Tempi "pen" cap comes with a clip. As you can see from the photograph above, the Quattro Tempi packaging until recently used to be a pretty basic cardboard box, but with a metal name plate riveted to the lid of the box.

My full lineup of the Officina pens: (left to right) end mill, reamer, thread, tap, marker point, micrometer. Note the screw used to close up the bottom of the barrel in the rightmost two pens, which are from "Quattro Tempi" sets. Unscrewing the nib section and bottom screw turns the barrel into a tube, into which the graphite lead holder can be fitted. The other four pens have the Mazzuoli and 3.6.5 insignia etched on the bottom of the barrel. The cap screws onto the barrel to post on all six pens.

The Officina line has evolved in a few ways since its original introduction. My collection was acquired from various sources and covers pens made and sold over a wide range of time, so I can see that some minor changes have been made to the models over the years. I'll try to provide a summary of the changes I can see:

[Nibs]: All nibs are steel, and appear to be a narrow Western Medium (i.e., slightly wider than a Japanese Medium), but there is no width indication on any nib. The original lineup had "Iridium Point Germany" written on the nib. Subsequently, the nibs were customized to have "3.6.5" engraved on them to match the official name of the series: "Officina 365." 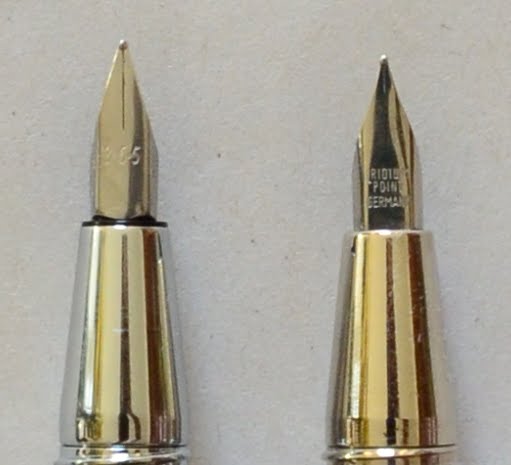 The oldest style nib is on the right, the newer style nib on the left.

[Feeds]: With the change in the nib style came a change to the feed as well. Do you see the thin black line below the nib to the left in the above picture? It's part of the "nib collar" in the modified style. [I think the collar may have been changed in order to prevent direct contact of the section with ink, as I have seen examples of the old model that had some corrosion damage to the part of the section just below the nib.] The feeds also changed: the newer feed has a longer ridge on the bottom than the older style.

[Converters]: With the change in the feed and nib unit comes a change in the converters as well. The original nibs were generic, with "Iridium Point Germany" marked on them, but had converters marked "3.6.5." On the other hand, the newer nibs had "3.6.5" engraved on them, but came with unmarked converters. Also, the converter widths (where they fit into the nipple on the nib unit) seem to have changed slightly, becoming a wee bit narrower in the newer style. That is why a generic Schmidt converter fitted into the old-style nib unit, but I needed a slightly narrower-mouthed Faber-Castell converter for the newer nib unit.

Now, all of this covers the history of the Officina lineup until quite recently (I don't know how recently, but until 2010 or so). Then there was a big shakeup:

1. Only the 3 "cylindrical" design models were retained: Micrometer, Thread, and End Mill.

2. Only the matte cap + matte barrel designs were retained.

3. Distribution: only the Quattro Tempi versions seem to be available in the US (i.e., with clip on cap, and screw to close up the bottom of the barrel), though standalone ballpoint, rollerball, and fountain pen versions are sold direct from Mazzuoli's website.

4. The nib unit was changed again, to use the same feed and collar as the previous one marked "3.6.5" but the nib is now more "heart-shaped" and with a breather hole.

The biggest change is to the packaging, which is now very high-end. The unboxing experience is akin to that of an Apple product. 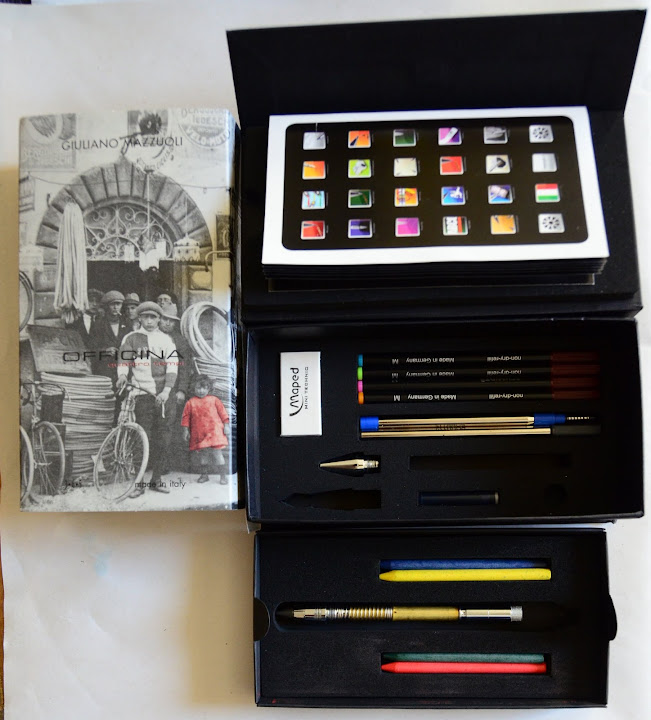 The box is now larger, and a double-decker, with quite a few more refills and some accessories like an eraser that were absent from the older version. Look at the pamphlet full of icons at the top right -- remind you of an Apple product?

Turns out the resemblance to Apple products may be more than a product of my imagination, as the booklet that came with the box contains a bunch of pictures of places in the Bay Area, principally San Francisco and Palo Alto (not Cupertino, but still ...) 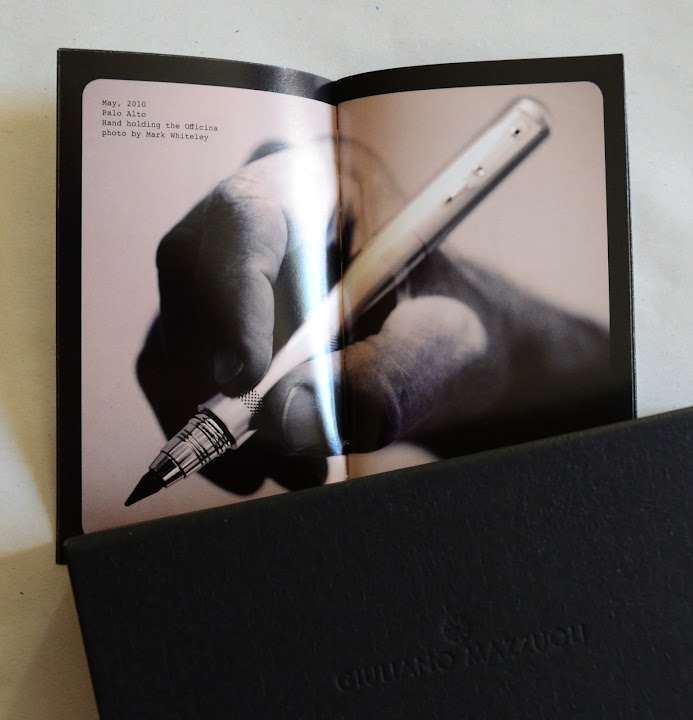 With this luxurious packaging has come a rise in the price as well. However, there is a small but tangible rise in build quality in the newest pens as well, which I can perceive by comparing my Micrometer to any of the others. It somehow just feels more "high end" than before, even though all the pens are exceptionally well made and well finished. I may just be partial to the all-matte finish, because I think my older all-matte Tap model comes closest in feel to the Micrometer.

These pens are not small, and they are also fairly stout. For those who prefer smaller, slimmer, pens, there is the Miniofficina lineup (same 3 models, just smaller in size). Somebody described these pens as the Rotring 600 on steroids, and I think that is apt. The only annoyance is the grip section, which is shiny across the lineup -- I really wish they'd made that matte as well. Still, the girth of the pen makes it easy to hold without slipping. Though the caps can be posted securely by screwing onto the barrel, they add to the weight and spoil the balance of the pen.

So how do these steel nibs write? Every one of them, exceptionally well! Each one is remarkably smooth, though again I think the Micrometer's nib with the breather hole has a "butter-smooth" feel on paper that is not quite matched by the rest. All the same, any of these nibs would count as "superb" when compared to any other steel nib by any manufacturer. The fact that all six write so well seems to be to be evidence of excellent quality control on the part of the factory. 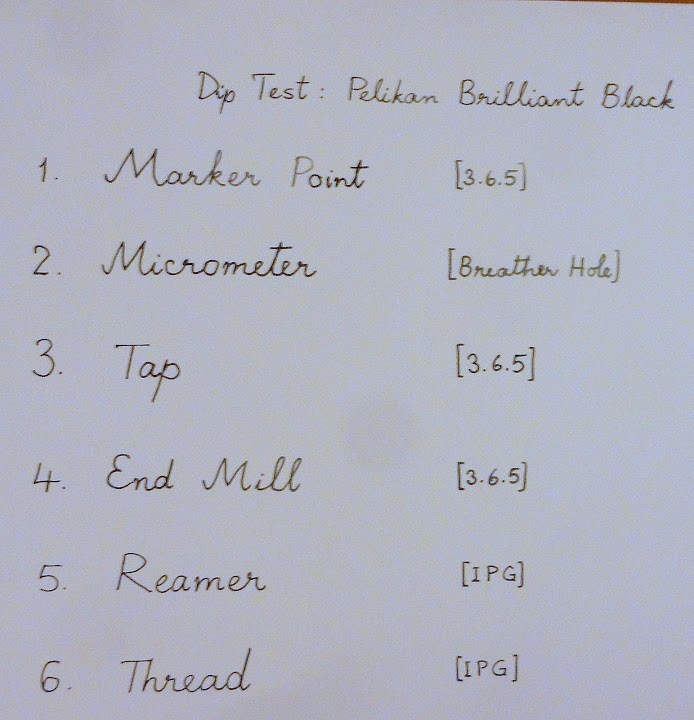 This dip test was performed with Pelikan Brilliant Black ink on HP 32lbs paper. My apologies for the bad white-balance. I have indicated the marking(s) on the nib in each case. As you can see, there is pretty much no difference in line width across the lineup, though perhaps the later (3.6.5 and breather hole) nibs are a bit wider than the earlier ("Iridium Point Germany" engraved) nibs.

Summary: The newest version is the best, by a small but discernible margin. In the US at least, it appears that you do have to shell out the extra for a Quattro Tempi box set, as that is the only version now available. However, as I said, the fit, finish, and nib quality is superb across the entire lineup, new and old, so if you can find one of the older ones for cheap, go for it!