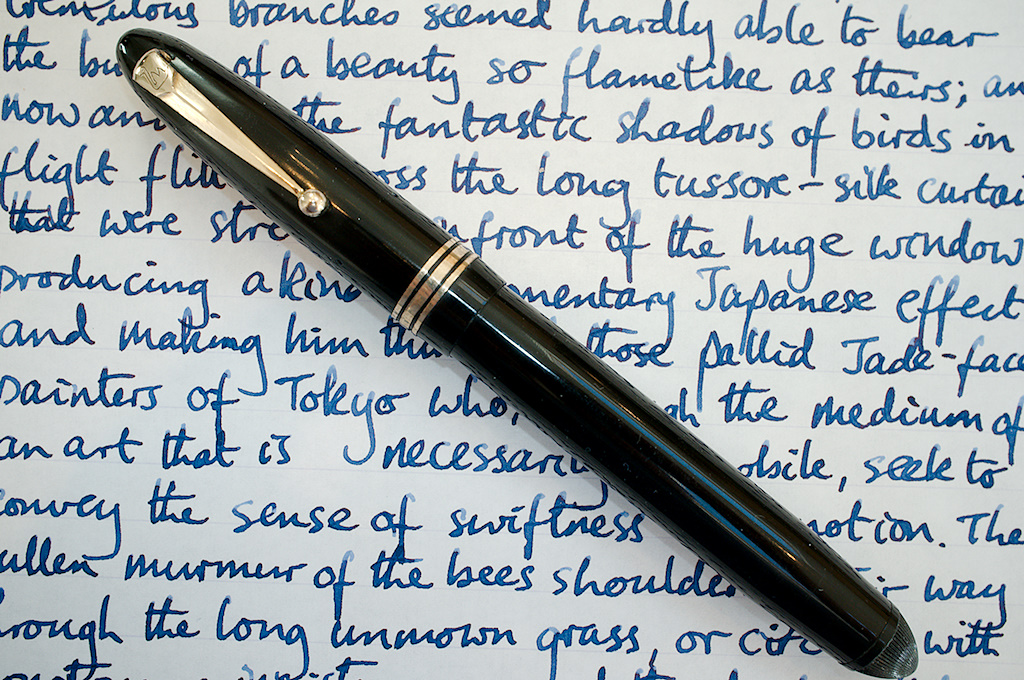 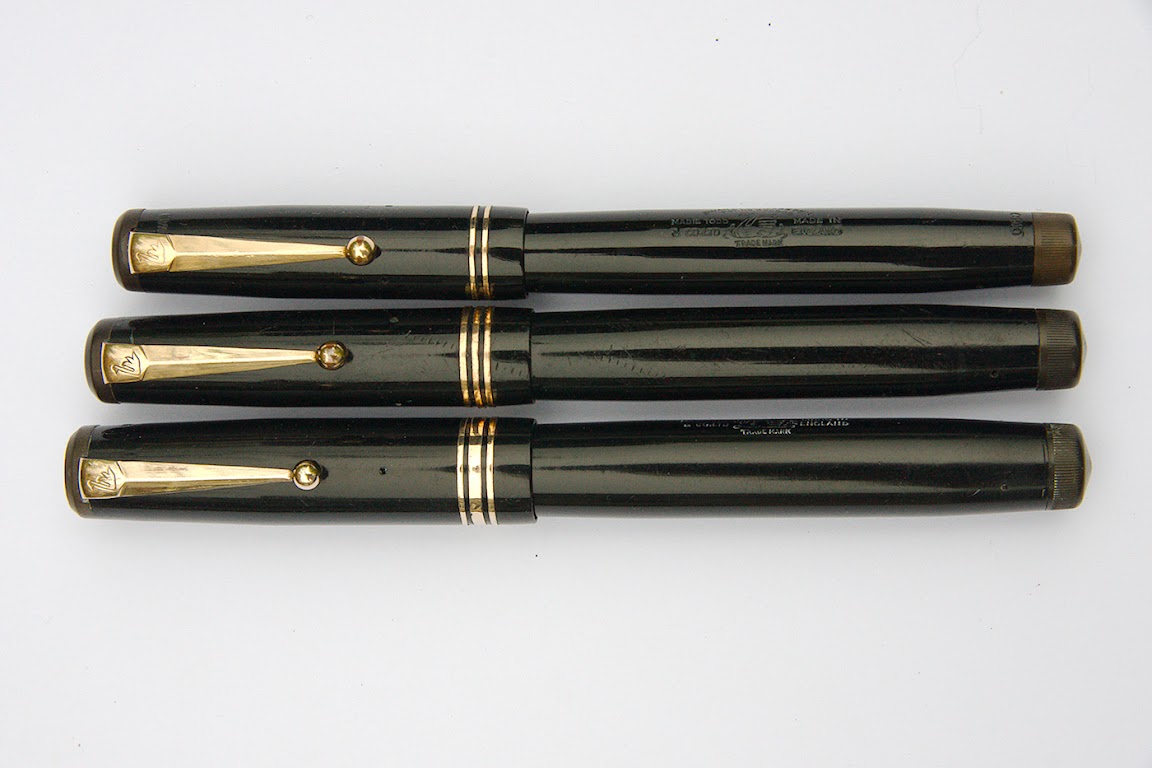 The 4xx series introduced streamlining but retained much of the same furniture and conservativeness: 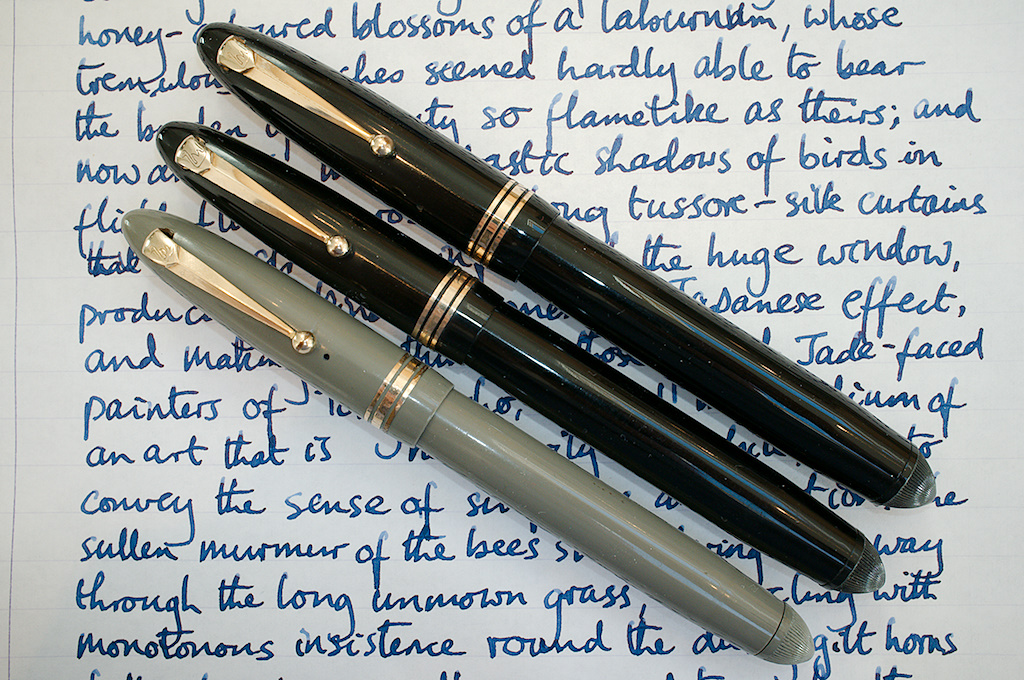 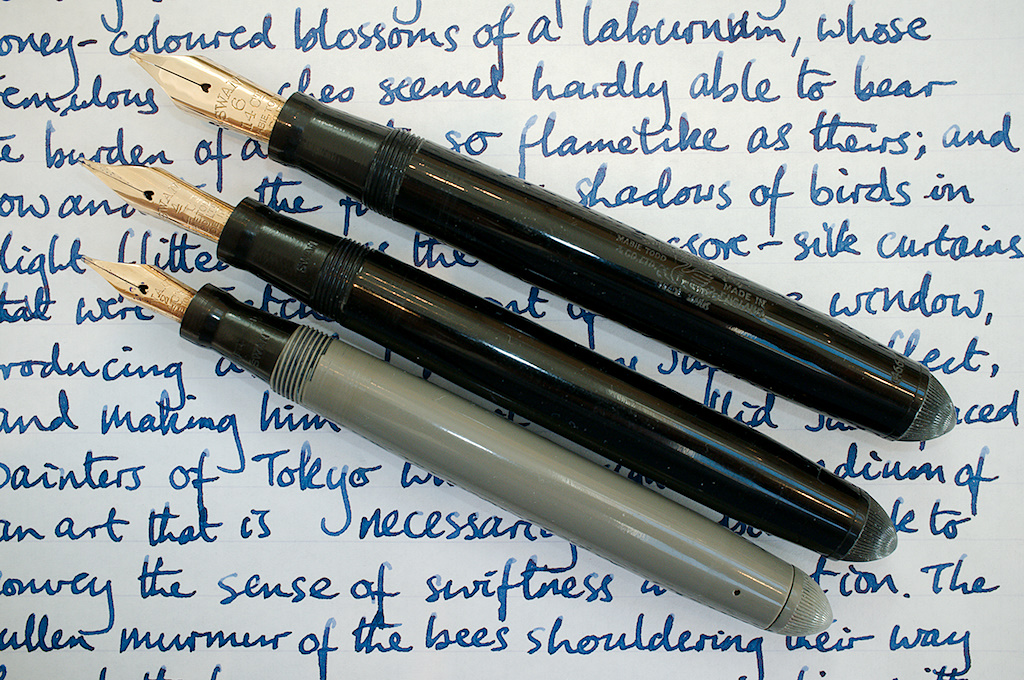 The 4460 is a decent size of a pen, 135mm capped, 169mm posted and nearly 13mm barrel diameter. Mass is 17g, a result of the mainly celluloid construction. The new shape was an evocation of the advances in science and technology made during the war, particularly aeronautics. However, the advance is only skin deep. The Swan leverless system that was used through the 1930s and early 1940s used an entanglement bar and was known for being less than 100% efficient. Everything that I had read led me to believe that the new streamlined 4xxx series pens featured a different leverless system that used a more efficient pressure bar. When I dismantled this pen to check the state of the ink sac, the first surprise was that it had a friction fit section, I was expecting a threaded section. Opening the pen revealed the same old leverless system that had served M T & Co for many years. There must have been a transitional period as I have also seen these torpedo shaped pens stamped with the model numbers of the preceding series shown above. Anyway, the pen contained a flexible sac which sucked up ink, unfortunately it is only a size 18 which is too small and will be replaced soon. 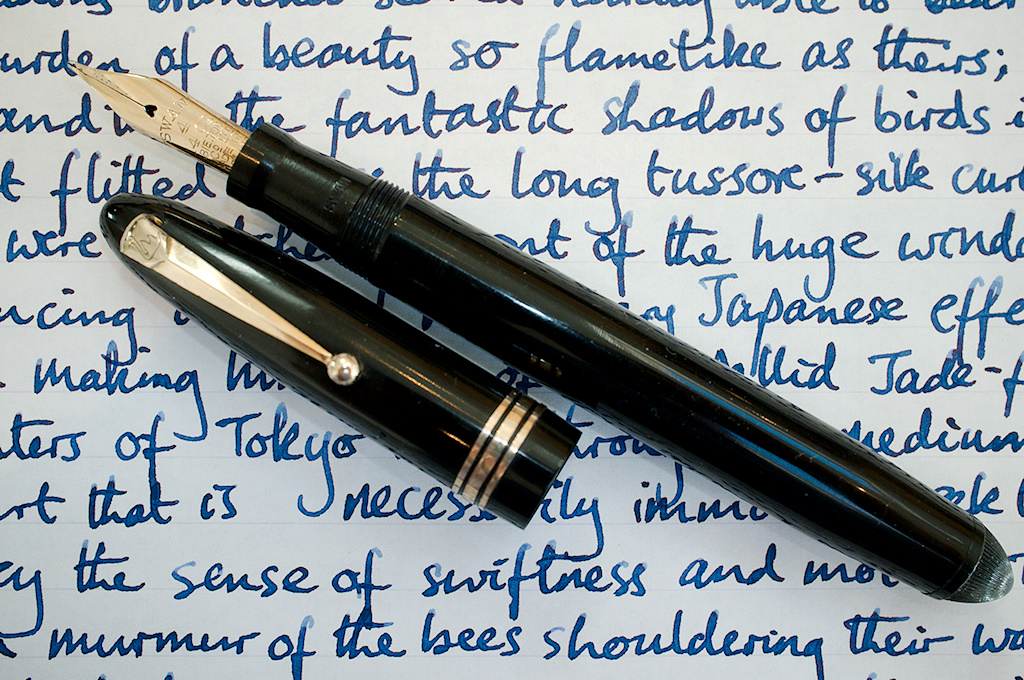 Filling these pens is dead easy. Just put the nib end in ink to the point where the section is just submerged. Twist the knob at the end of the barrel fully anticlockwise then return it to the original position and wait a few seconds. The nature of the filling system means that the pen doesn't hold as much ink as it could but it is still a reasonable amount. The nib and section are entirely conventional consisting of a ladder feed and friction fit 14ct gold nib. The ladder feed is the same as can be found on a 1920s Swan, an indication that it is a design that works well. Swan nibs have a reputation as superb performers. This nib was very smooth on first use but seemed not quite right, indeed it clicked in use. Clicking is a sign that the tines are pressing on each other and inspection showed that one tine was very slightly bent inwards. A quick tweak sorted the problem and returned the nib to a lovely soft stubbish broad. A writing sample can be seen below (please ignore the colour, the scanner is not great).

There are so many vintage pens out there, but these Swans rate as some of the best. I think that this is being recognised in the pen collecting world as prices seem to be rising rapidly. I paid £37 for this 4460 which is a good price but it will be interesting to see where they go in the future.

That's a sweet pen, thanks for sharing it. I love the nibs performance.

That's a sweet pen, thanks for sharing it. I love the nibs performance.

This pen has the smoothest nib that I have ever used and I have used a good number of pens.

A well considered review and you are lucky to have two such terrific sets of Swans. I am quite envious.

"The cultured man is the man whose interior consciousness is forever obstinately writing down, in the immaterial diary of his psyche's sense of life, every chance aspect of every new day that he is lucky enough to live to behold!" - John Cowper Powys

These UK Swans are great pens, I just love the way they write. I've got a 1042 with a medium italic nib that I really love. I wish we saw more of them here in the US.

I have just acquired a Swan 4660 so this has been invaluable. Thank you

You can't have too many fountain pens.....

I have a 4461 which I posted a review of in this section last year.  According to the searches, it is the same dimendsions as the 4460 but is made of hard rubber rather than celluloid.  This gives it a warmer texture with the same balance and smooth writing.  I recently tried a 4660 with a medium/broad nib that was slightly larger and more to my liking.  It had a medium/broad nib compared to the fine on my pen.  Even better would be one with a flexible nib but they sell fast and for more money.

I have noticed that the nib on my pen is "sweating."  Not leaking exactly but when not used there is bit of ink on what was a clean nib and the underside appears to be damp.  Has anyone else experienced this or have any suggestions?