19 replies to this topic 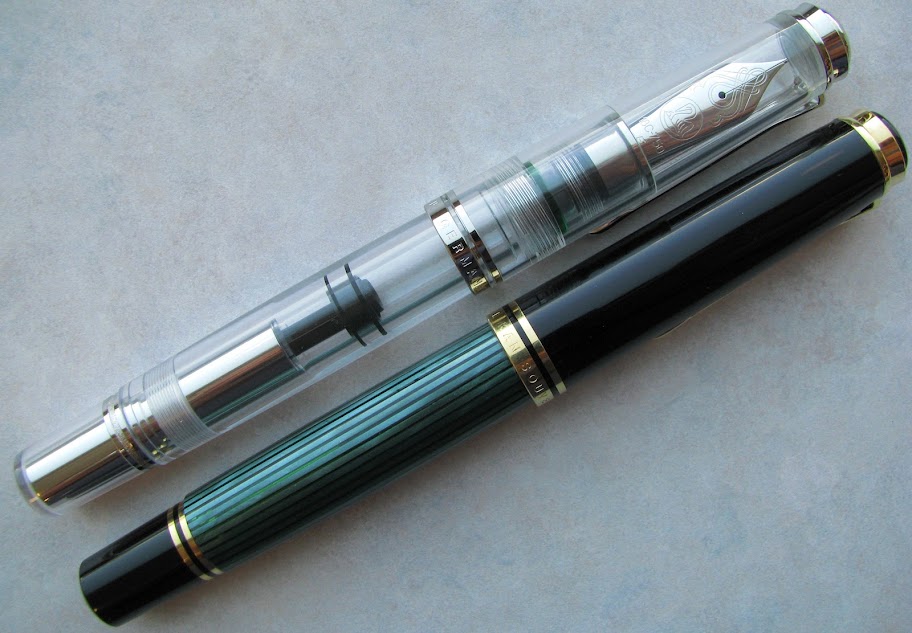 The M1000 series, as most of us know, is Pelikan's flagship model, their 149 as it were. Except for the nib and feed this pen seems to be an over size M800, but that would be selling it short. It is big, huge even, but it is not all that crazy. It is the same length as my Omas Emotica, and not so fat as the Delta Planet pictured below. It is bigger than an MB 149, but not anything like Delta's Dolce Vita Oversize. The green stripe is the best looking Pelikan Souveran, and in my opinion the M1000 green stripe is better looking than the M800 green stripe. Fuller, more mature, filled out, more confident, something; it just looks better. Many of us have Pelikan's entry level M200 series pens. Below is a size comparison with an M200. As you can see the M1005 is an inch longer and a 1/10 of an inch broader. The M200 weighs just 13 grams whereas the M1000 and M1005 tip the scales at 32 and 36 grams respectively. Of course, the M200 has a plastic piston mechanism. The big birds use brass.

The other difference is in the nib. The M1000 series nib is massive. It is really more like a spade. In profile it is quite attractive, largely because of the feed, which has a nice full shape with deep fins. From above it is not as hot. It's not ugly exactly, it just seems utilitarian rather than attractive. For a comely nib see the Delta Dolce Vita Oversize that is simply gorgeous. The MB 149 is pretty too, and iconic enough to be well appreciated. As can be seen below the M1000 and M1005 nibs are different in appearance, but each one works well with their respective bodies. 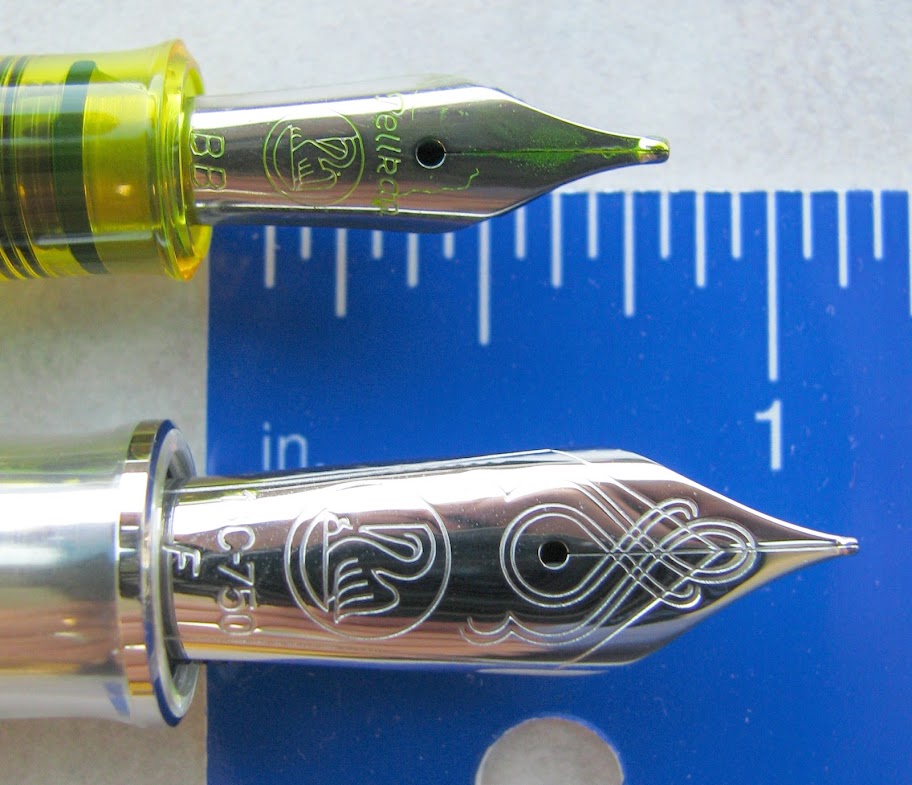 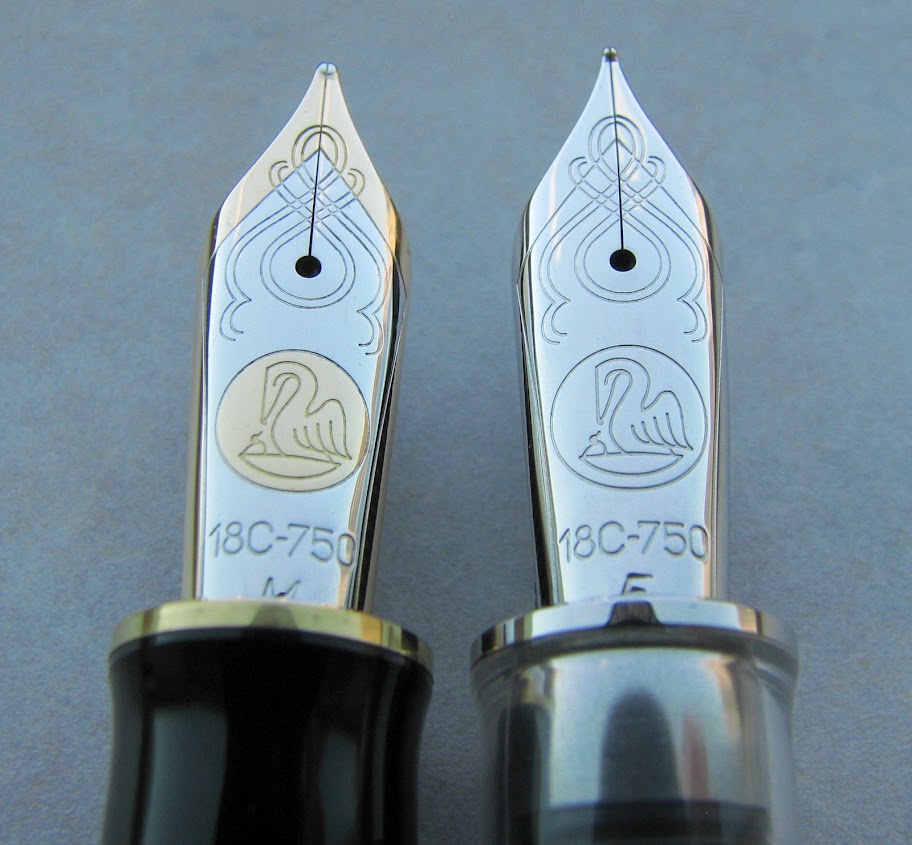 The caps are different too. I think the new tassies are too shiny, but I like the more realistic looking peep. I like the old pressed logos the best. Don't know if the M1000 ever had a pressed logo as it entered into the silk screened era. 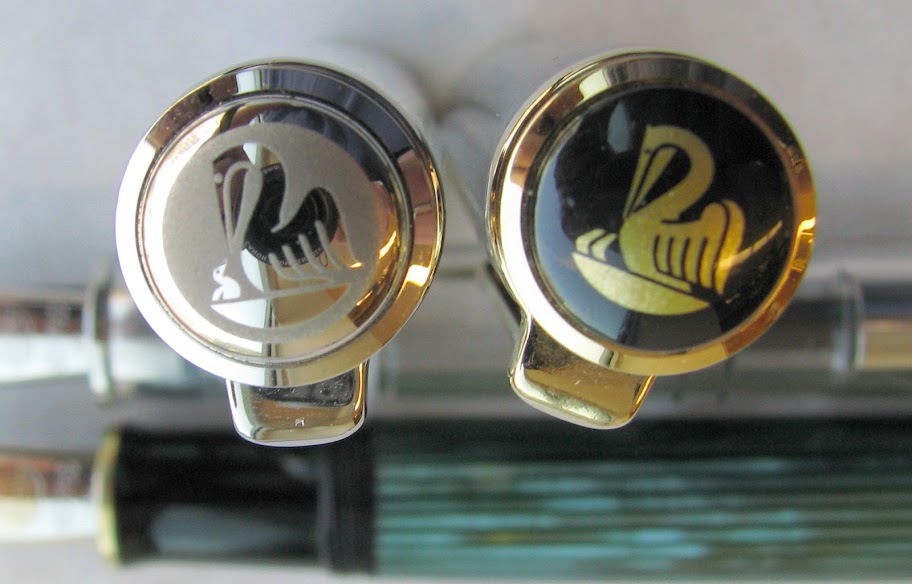 See, the nib is huge! The parts are also interchangeable. Well, the accessible parts are anyway. Don't know about the piston mechanism.

As we also already know, the M1000 is a very wet writer. Is there another pen with such willing ink flow? With a light touch the M1000 will write a true medium line, but the ink tends to pile up on itself, which can lead to slow dry times. Dry inks are definitely recommended. The nib's springyness and wet flow contribute a lot to the writing comfort. I once had a MB 149, and I craved more flow. With the M1000 I actually wish for less flow. The nib is so wet that I don't think that I could write fast enough, or with a light enough touch to make the nib skip. Problem is that I am left handed. Thus, ink drying time is an issue. While I really like the medium nib, the fine nib on the M1005 is much more usable for me, and I suspect for most other people as well. I can only imagine how much in comes out of a BB! Ink supply is not as large as you might expect. Surprisingly small actually, and is nearly the same as a M800. The M1000 will run through ink much faster than an M800 though because of the generous ink flow. Here is a writing sample. Note that it is possible to write upside down to tame the tide some. Also, while not truly flexible, there is more than enough spring to easily get double broad (or more) lines from the medium nib. Wet double broad that is. 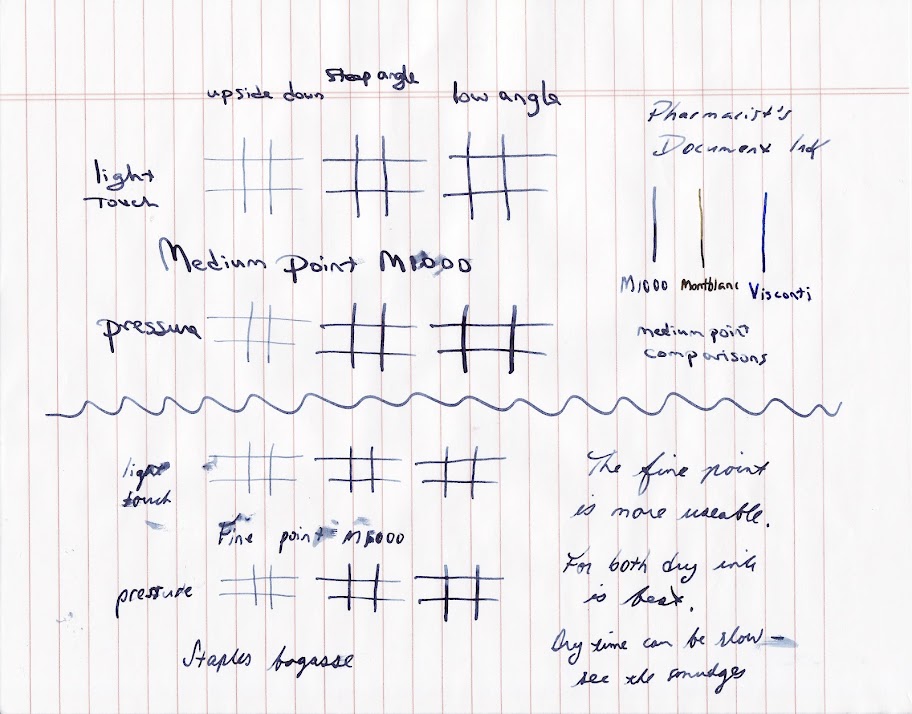 See, it's skinnier than a Delta Planet let alone a Dolce Vita Oversize. 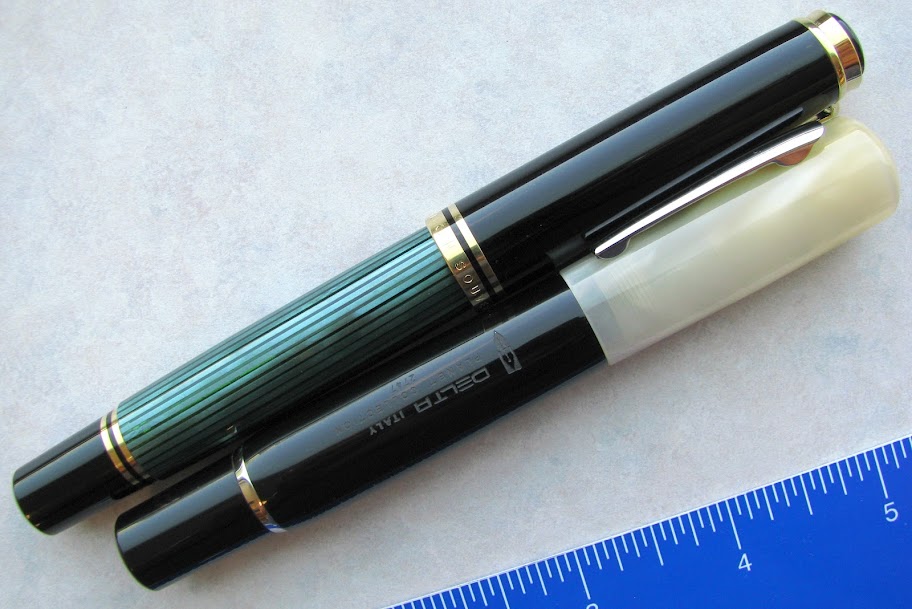 See also that the demonstrator is really really clear. Much more so than my other demonstrators. I guess it takes a lot of effort in the factory to get things that clear, and that clean. Nice effect, and worth the price premium. 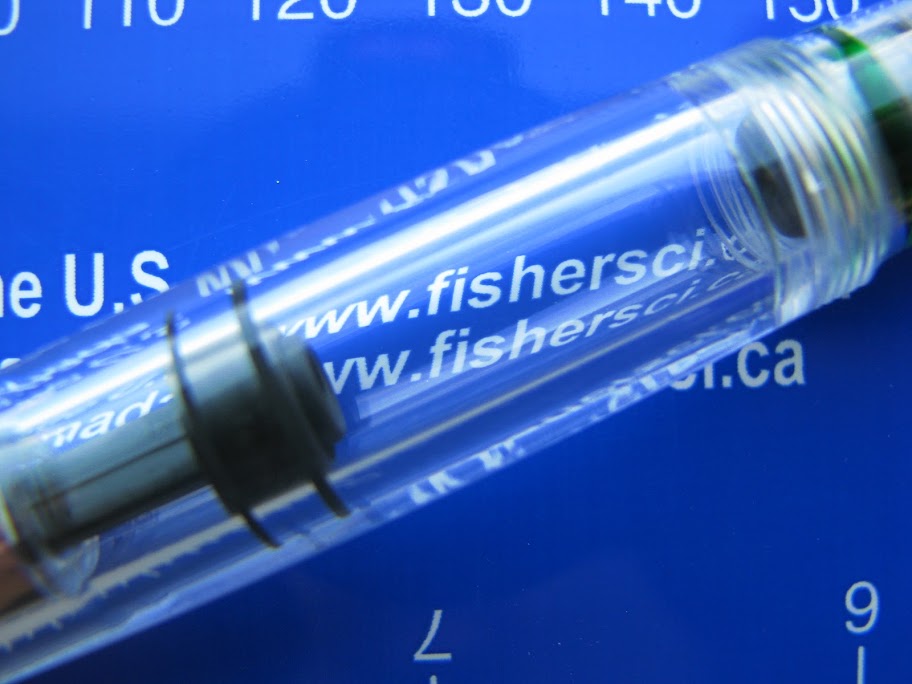 These big Pelikan's are great pens, and are worth the price of entry, especially since deals can be readily found. They are better made, and much better priced than a MB 149, but they can't match the size, presence, or beauty of the Delta Dolce Vita Oversize. The Delta also has an ebonite feed, and it can be used as an eyedropper (would it ever run out of ink?). Of the two M100X's I think I prefer the green stripe, especially as a daily writer that I can toss in a bag. The M1005 is robust, but will naturally show scratches more. The green stripe is classy and noticeable, but not flashy like the Dolce Vita (not that I don't love mine). Also, the lack of a snowflake on top also means that there is less baggage attached to it. Hope you enjoyed this little look into a big pen, and don't hesitate to pick one up for yourself.

Though I'd add some more comparison pics. Included below for comparison is the Pelikan M800 and the Delta Dolce Vita Oversize. Note that the M800 is not all that much smaller of a pen than the M1000 save the nib. Also, note that the Delta is a much bigger, more vibrant looking pen with a better looking nib. 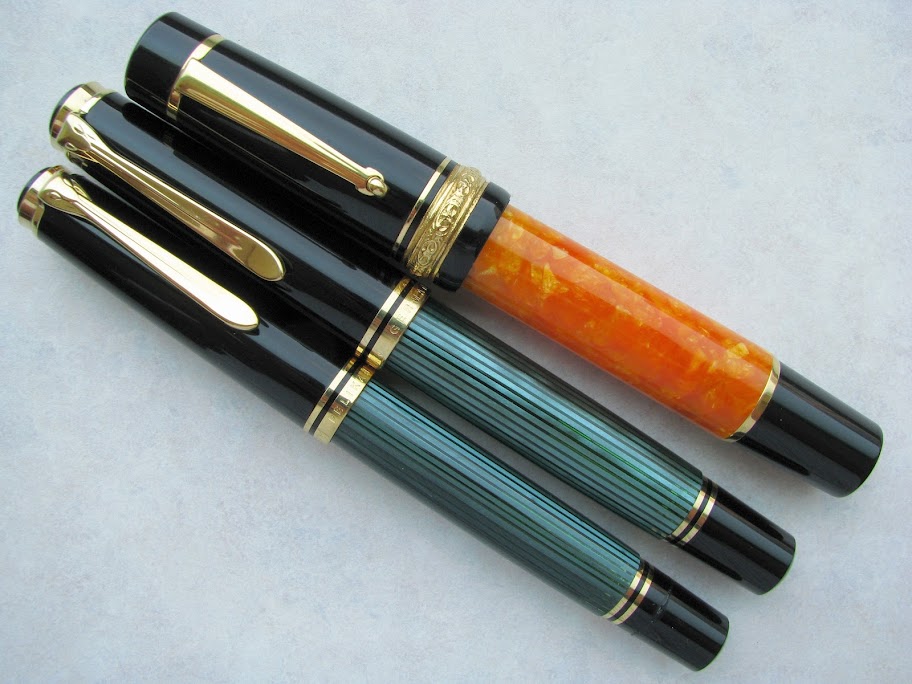 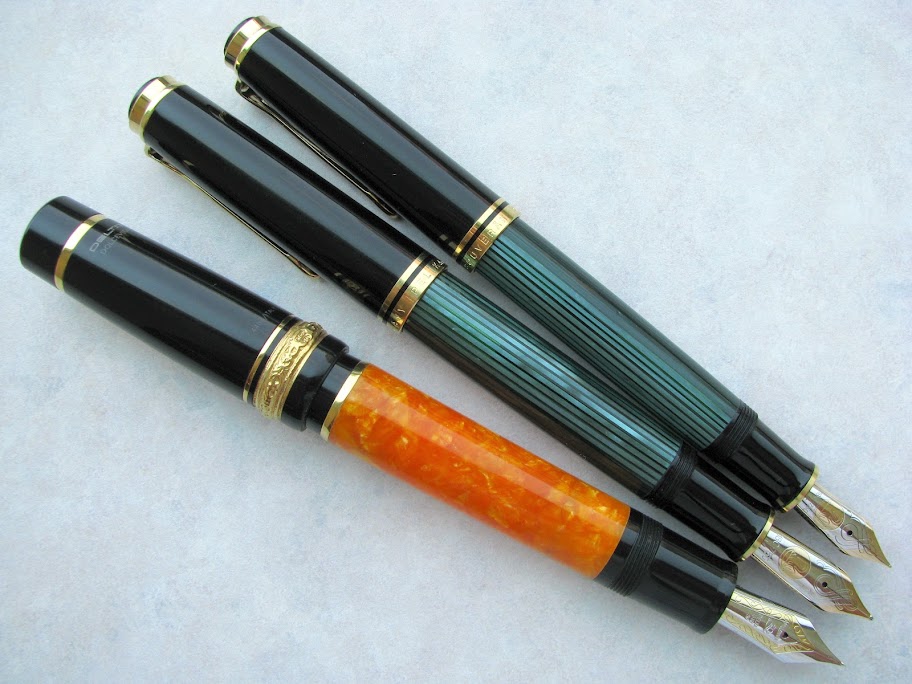 What a great review.

Soon I'll be picking up a 1000 in green stripe. I've had my share of Pelikans over the years -- 800s, 600s, 400s. My journey into fountain pens started with a 200. But eventually I sold them all, succumbing to the beauty of the Italian pens. Yes, I have a DV Oversize but find the nib a touch too stiff.

There is no denying that the Pelikans are workhorses, and I've been getting into pens with semi-flex nibs. So I really need to give the 1000 a chance. Your review confirmed my decision to do so.

Thanks for the review! The size comparisons were especially useful; they really give perspective to those who haven't been privileged enough to see it in the flesh...

Thank you for these beautiful pictures and especially for the comparison shots with Delta Dolce Vita. Delta Oversize is indeed oversized, Wow!
Like you, I was amazed to see how clear and clean M1005 looked and that's why I couldn't come to inking it up yet. One day I will, though. (I just don't know when that day will come.

I own two black m1000s, I didn't buy the demo because it is a pain in the ass to clean but great pen otherwise

Really appreciated this review! Since the M1000 is almost too big for me, I really like the fact that you compared it to the Delta Oversize, because if I ever got a Delta Oversize I probably would not be able to use it comfortably. The Delta Oversize is a beautiful pen, no question about it!

All the best,
T

Now you've done it! Got me longing for an M1000 again, when clearly my bank account would beg to differ...

M1000 yes. M1050 definite yes. M1005 no. Just never bought into the demonstrator world regardless of who makes them.

Thanks for such nice review and comparison between these top of the line pens. That brass piston hardware just looks so flawless I can only imagine how smooth it must feel to turn compared to the plastic of the <M600 lines. I think I have to disagree about the beauty aspect of M100X v. Delta Dolce Vita

Great post, great photos and pens! Thanks for sharing!

Thank you for this excellent review! Nice comparison. I prefer the M1000 style wise.

Anyone having ink staining on the M1005?
tc

I had some issue with some blue ink (Diamine ???), so I removed nib and piston unit and cleaned the barrel (and relubed the piston seal, by the way).

Only issue with this pen (as with all Pelikan demos, AFAIK) is some ink trapped in the section (you can see it in one of OP's pictures).

Simple solution is to keep in always inked and in use...

I have three M100Xs', a black/gold, a green striated and a demo. The Black pen has B Nib cut to a magnificent Stub. The Green Stripe and the M1005 have stock Medium nibs, the nib in the Demo is the better by a whisker. I have had no staining in the 1005 which has thus far enjoyed a diet of Diamine Ink..... Appleglory, a bright green, Pumpkin, a loud orange, and Matador, a bright red...... I have rinsed the 1005 thoroughly before each refilling and it has had one trip through the ultrasonic bath.

I have used my M1000 for years with various inks and no hint of discoloration. I have however, an Omas Ogiva Vision that has stained severely. My MB 149 has had several different inks run through it and it's window is still crystal clear. I have waited years for a M1000 size demonstrator, but wanted feedback as to its resistance to staining before I make the investment. At least a 1005 can be dissembled. Thanks for the information.
tc

M1000 yes. M1050 definite yes. M1005 no. Just never bought into the demonstrator world regardless of who makes them.

So no demonstrator for you. How about a 'demonstrator' made of Bergkristal (rock crystal) with platinum fittings and filled up with a beautiful eyecatching ink?
Would you still say no not for me?
Now I'm not a fan of demonstrators, but one like above mentioned would please me.