So the first pen I've wanted (that wasn't a custom) in a LOOONG time just happened to be a Swan. Malcy is all the time posting reviews of gorgeous English Swans and since I put on a sac and adjusted the nib on one a little over a year ago I've wanted one bad.

So I got a hold of one from England - a little SM2 - and it is SWEET. The pattern on the black hard rubber body, the imprint, the nib, all perfect.

It's a skinny little pen - probably skinnier than I was expecting, but it's still very nice to take quick notes or write fancy letters with. I haven't written pages and pages, but I have enjoyed the heck out of it. It's perfect posted or not for my hand.

Part of the reason I wanted it was for the cool factor of that hard rubber lever bar. That's the coolest lever of any fountain pen I've ever used or seen. It's subtle. It hides. It doesn't scream "Look at me! I'm a brassed and scratched up old dented bent metal lever!" It's just... there. I love it.

I had to put a sac in it - easy to do. Just heat the barrel a tiny bit and pull the section out. Somebody had pulled all the bits out a while back and left a bit of sac on the back of the section - easy to clean up. Takes ink very well - as it should. Holds a fair amount - but when that nib spreads the ink FLOWS. I love it.

I've played with a few Waterman nibs over the last couple of years, a couple of wet spaghetti noodles, semi flex, soft and super wacky doodle o flex, stiff flex and every other flex you can imagine. This one though - to ME - is the ideal. I get a nice dry extra fine line until I lay into it a little bit and it spreads almost effortlessly. I don't have to worry about flexing when I don't want to, or it being difficult to flex when I ask it. It's just perfect.

I also love the shape of the pen overall. It's got a nice gentle taper from the middle of the barrel towards the section and barrel end. The section is pretty skinny, like holding a pencil, but it's pretty good with the thicker barrel kind of balancing that skinny bit.

One thing that I don't care for - and it's mostly a visual thing - is how the lever seems to stick up a tiny bit from the barrel. Either that's normal or the barrel is a bit warped from use and age. Either way it's not that big of a deal. When I put the section back in the barrel I made sure the lever was in line with the nib and it doesn't bug me when holding and writing with it.

Over all it's just a fantastic little pen. It's not often I want something that's not hand made, but this guy is an exception. The Swan linked above just struck a chord with me and I've wanted one ever since. Mine is much smaller than that one - but I love it to death.

over a yellow wal mart pad.

It really is a sweet little number with superb flex. Another winner from Swan.

It is great to see someone so excited about their Fountain Pen. I can see why, it's a beautiful looking specimen of a Fountain Pen! And that Gold Furniture is just to die for. 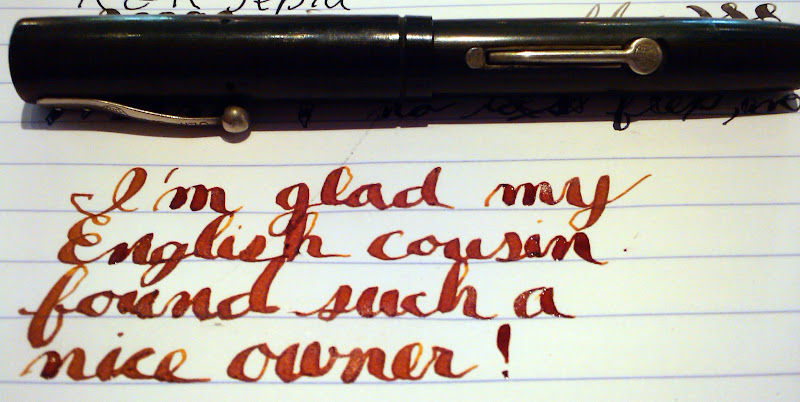 Sweet pen; the lever is a knock-out...nib ain't bad either.

My wife always snickers at little ring tops. She calls them Cracker Jack prizes. When I showed her this one, there was just a quiet "Oooh...".
I love Swans. Don't have enough of them. This one has a 1918 patent date and is marked 192/41. Don't have a writing sample, but the nib is Fine medium flex. Wow, that is one beauty of a pen, and what a great nib! I had not heard of a hard rubber lever until now. Very, very cool.

I didn't think hard rubber would be strong enough to make a lever from. Obviously I'm wrong. Nice looking pen. Good to see a review from you Shawn.

A beauty, for sure

I like the hard rubber lever, but would also be worried about durability. I suppose, though, if the pen can last, the lever can last.

I handle a lot of these pens and it's very rare to find one with a broken lever. BHR's a lot tougher than people think and it lasts better than some metal levers - those of Conway Stewarts, for instance.

Hey, nice pen! Cool to see your work on mine inspired you! I'm kind of drooling after yours now...grass is always greener, no?

< loves ringtops, (cracker jack prizes, funny; )
Shawn, it's infested with escaping worms, send it to my house. I'l wrangle them! yEE-haw!
can you tell mabie todd swan missing from the teensy cj collection?

I handled that pen , just after Malcy bought it for you, it is a very nice example.
et

Heck yes it is. Love it.

Hoped to grab a similar Swan M2 on ebay today, but unfortunately one bidder was prepared to buy more.
This pen certainly is high on my wish-list.

Hoped to grab a similar Swan M2 on ebay today, but unfortunately one bidder was prepared to buy more.
This pen certainly is high on my wish-list.

This UK dealer has more than a few Swan pens up for sale http://www.vintagefountainpens.co.uk/ no affiliation etc.....
Eric

i have the same pen but haven't resacced yet, what size is the sac 14, 15?
i bought it last year in pristine condition but never knew what model, was just curious about the black lever since they are very rare sight

THey're not that rare are they?