I was looking through the isellpenswebsite for Heros and Wing Sungs because these cheap Chinese pens are (in my experience) very reliable and much less expensive than other brands. I've been a big fan of the two Hero 330s and 616s that I have as well as my Wing Sung 101 and 233. They're uncomplicated, reliable, and cheap. The 330 is also inexpensive, but I wouldn't call it uncomplicated. The double nib is interesting looking, and at the price I couldn't pass up the novelty. It doesn't come in a very impressive box, and I don't recall it coming with any sort of instructions.

Appearance and Design:
The Hero 360 is a really nice looking pen. It sports an all-metal body (probably aluminium) that feels sturdy despite being very light-weight. The finish is a nice satiny blue, and the silvery bits at top, waist, and clip add a nice contrast. The grip section is shiny silver, and the cap posts just fine. The cap is very lightweight, so it doesn't overbalance when posted. 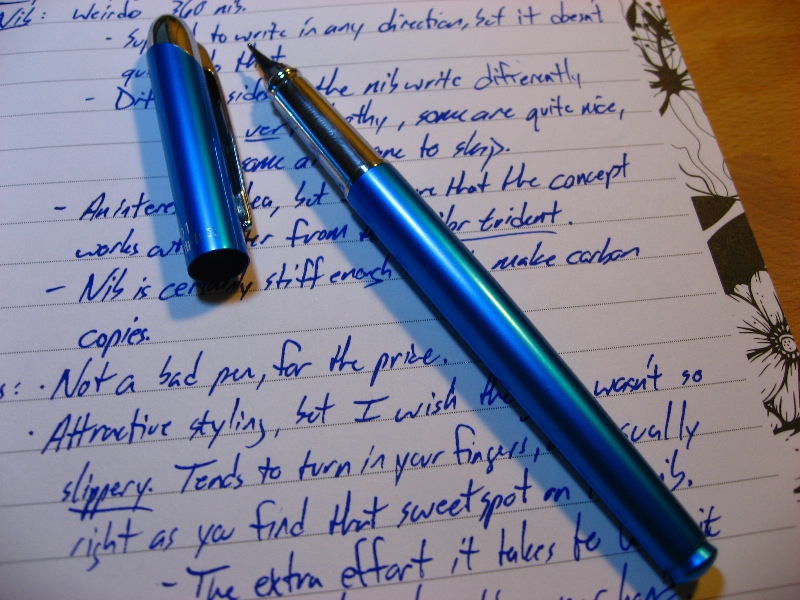 Construction & Quality:
The construction quality of the exterior is good. There is a bit of a lip where the silver top meets the rest of the blue cap, but that is a minor imperfection that doesn't cause any real problem. The clip is nice and springy. It will move about 1/2" away from the cap, so you should be able to clip it to a pocket without any problems. The grip does have a tendency to unscrew itself a little every once in a while, but it hasn't ever worked itself free from the barrel. The only real annoyance is the grip. It's nice and shiny, but it is also very slippery. The pen turns in your fingers and I'm not fond of that.

Weight and Dimensions:
It hardly weighs anything at all, but I don't have a scale for exact measurements. You'll forget that it's in your pocket.
It's about 5 1/4" long with the cap on and roughly 4 1/2" uncapped. I have large hands, so it's a little more comfortable to write with when posted.

Nib & Performance:
I really bought this pen because of the weirdo nib. It's one of those nibs that promises the ability to hold the pen however you like and write more-or-less like a roller ball. It looks a bit like a pair of nibs mashed together so that there are 4 slits in the nib. It will write from most angles, but it's performance is inconsistent. Some sides of the nib write quite nicely, but other sides are so toothy that you can feel them shuddering a little on the page, and some seem dry enough to skip while other sides seem a bit too wet. If you can find the good-side of the nib it's a pleasant enough writer, if a little wet. It's certainly sturdy enough to make carbon copies, I'd imagine.

Filling System & Maintenance:
It's a sack filler that is pretty easy to fill. Dip the nib in a tank and squeeze a couple of times and you'll suck up an respectable amount of ink. The metal covering the sack does come off, though mine was reticent the first time. It's easy enough to clean. Just work the mechanism in a cup of water to swish the old ink out and then set it out to dry on the counter for a while. There's not much air flow at all into this closed sack, so it will take some time to dry out even after you've squeezed all of the water out. 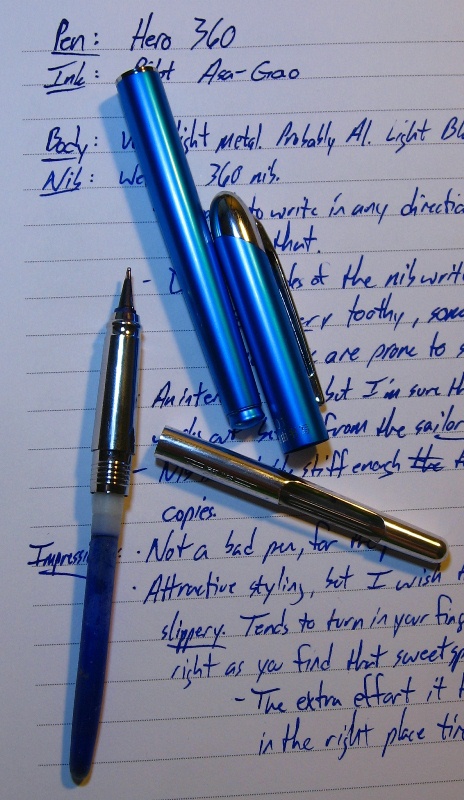 Cost & Value:
I paid about $3.88 for this pen, I think. (I just checked ebay, and there are people out there selling a very similar model of this pen for about 10x the cost. Cray.) It's not a lot of money, and the pen does work. I don't think it's one that I'm going to use regularly, but it does have some novelty value. I might actually try to tweak the nib a bit. Perhaps some fine-grit sandpaper would do it some good in evening out the writing experience.

Conclusion:
I can't really recommend the pen very highly since the nib is so hit-or-miss. I'd really like to have a pen like this that worked more reliably. I like the look and the build, but the slippery grip and the nib are serious detractors. I bet that the Sailor Trident FP is a much better performer, but those are sure to be much more expensive.

I have a similar make: the 3266. I second the nib issues. The ring of rubbery plastic that connects the nib to the barrel/grip makes the nib very loose when writing, and seems like a fragile point. I was really disappointed with the nib's smoothness and reliability, but this seems like a nice pen to give away to rollerball users...

My two fingers on a typewriter have never connected with my brain. My hand on a pen does. A fountain pen, of course. Ball-point pens are only good for filling out forms on a plane.
Graham Greene

My nib is inconsistent, but it's not loose. I don't think it's fragile, but I'm not going to give it to a rollerball user because I don't want to scare them away from fountain pens.

I've been using a Hero360 for the past several days (ever since I lost my Lamy). It puts down much more ink than my Lamy. Almost blobs during the first word before evening out. Oddly, it seems a finer line but because there's more ink words are darker.

My main gripe is the scratchiness of the nib. I gotta figure out how to smooth it out. Second gripe is about 1/3 of the time it doesn't write unless I rotate the nib. Not terrible but somewhat annoying.

Still, it's working. My registrars ink is looking wonderful, much better than with my safari.

These are interesting little pens and thanks for posting this review. We will have more of these in stock in about 2 weeks. My 14 year old snagged one of these pens and he really likes it. They are not a high end pen but for under $4.00 they are a fun pen.
Best Regards,
Todd
www.isellpens.com

Yep, they're interesting and they are cheap. Thanks for stocking pens like this, Todd. They're a good value even if they're not perfect.

I just got one of these - black with silver trim.  It took a month to get here.  (Rumor has it that was placed on a raft and set adrift in the East China Sea, but I cannot verify that.)  I smoothed it by wiping it across a damp #12000 MicroMesh pad, turning constantly to avoid flat spots.

One side gives a finer line - I'll have to mark it somehow to make it easier to find that "fine" side.  The more I use it, the more I like it.  It makes a good checkbook pen.

I got a few of these pens to try out at the start of the year, I think I got a bad bunch, only 1 out of the 4 had a nib that could write. The other 3 fell apart on me.