Always with an eye open for a bargain I saw this Pelikan 140 for £27. Now I had been looking for a Pelikan 140 for a while and this one was in the uncommon blue colour and had a BB nib which is always going to get my attention. 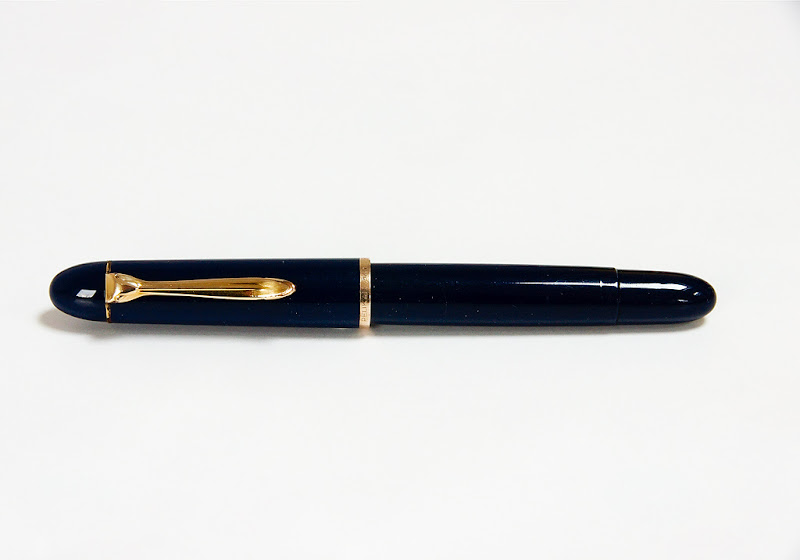 The vendor said that it was unserviced and that the filler knob was stuck. So thinking that it would probably be a result of dried ink that a flush would fix, I went ahead and bought it. My hypothesis was partly right but the actual problem was greater than I had first thought. What appeared to be an easy fix was actually far, far worse. On receipt of the pen, I managed to unscrew the nib only to find a thick black gunge in the feed, in the ink chamber, in fact everywhere. I tried to remove the gunge but it proved very resistant to water and cotton buds. It was obvious that this sort of work was not going to resolve the problems.

Admitting defeat to myself, I dispatched the pen to Eric Wilson for repair. The news that came a few days later was not good. A previous owner had used something like indian ink or drafting ink in the pen which had clogged it up. Worse than that, the ink had got behind the piston and set and the previous owner had broken the mechanism trying to get the pen working. These are photos taken by Eric of the filler mechanism and the clogged feed:

Well, Eric worked his magic and the pen is now fully operational. It is a sweet writer and I am very glad that it has been restored back to full use. 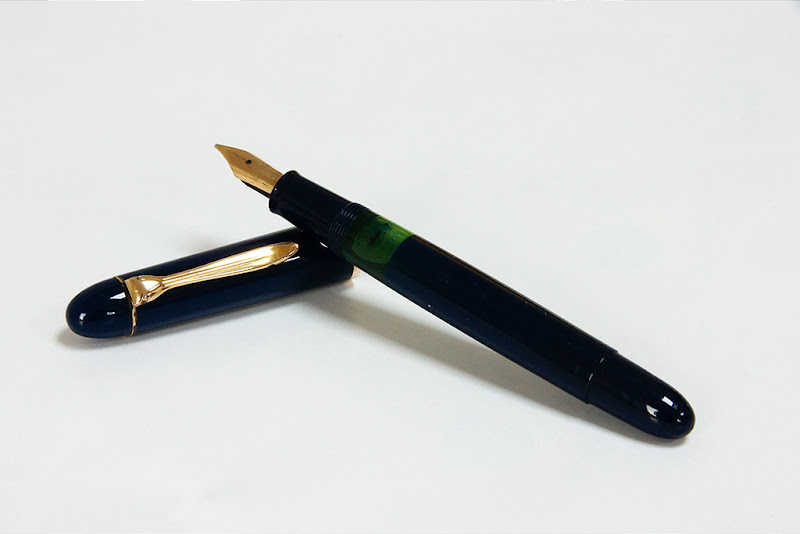 The Pelikan 140 is a classic example of the 1950s German fountain pen. It is made from high quality materials and is very pleasing to the eye in it's smart dark blue with gold trim. According to Rick Propas Penguin site the body is made from acrylic and has stood up to years of use well. The pen fills by putting the nib in ink and screwing the filler knob one way, then the other. This moves the piston down the barrel to expel air and back again to suck up the ink. The mechanism is smooth and effective allowing the pen to hold a lot of ink (just as well in this case). 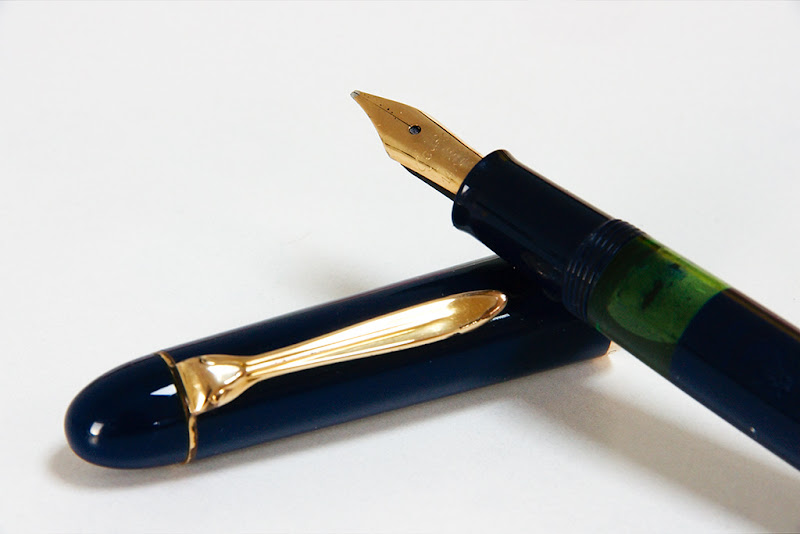 The nib is fitted into a nib unit which simply unscrews to change for other widths. It is the standard method that Pelikan has used to this day in it's piston filler pens. The nib is a really sweet 14K gold BB nib. It is so smooth and has some flex, but it has to be the wettest nib that I have ever used. 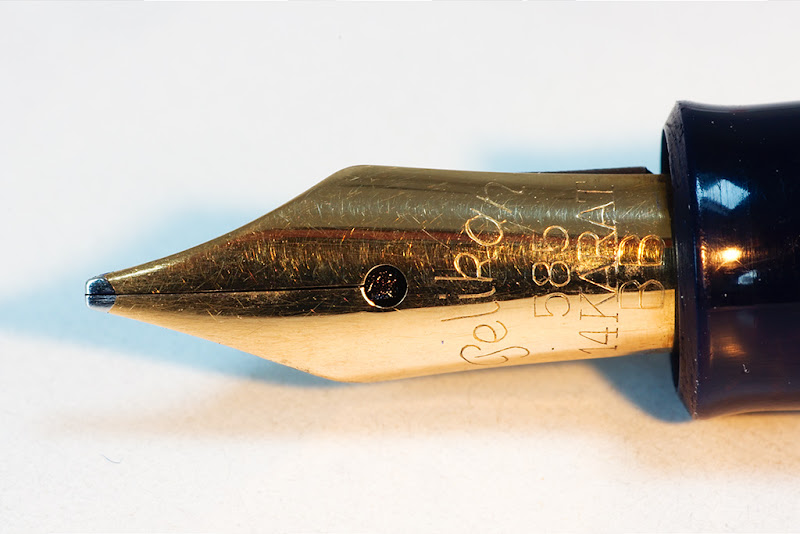 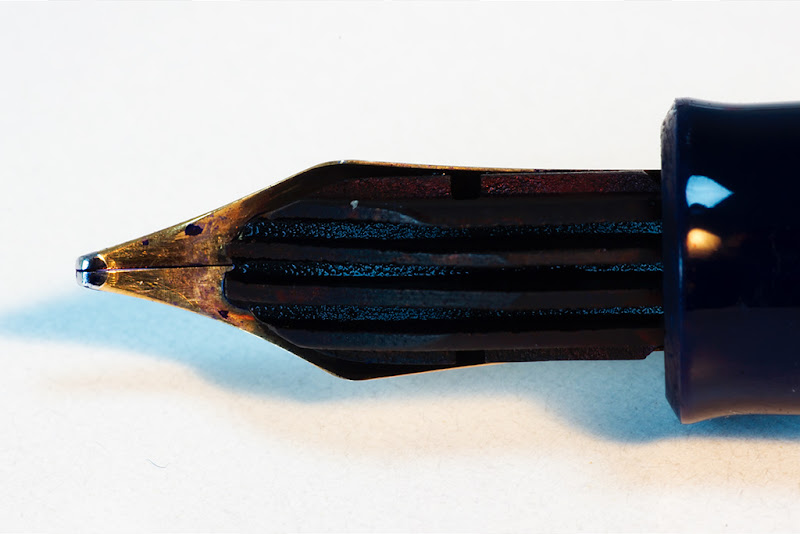 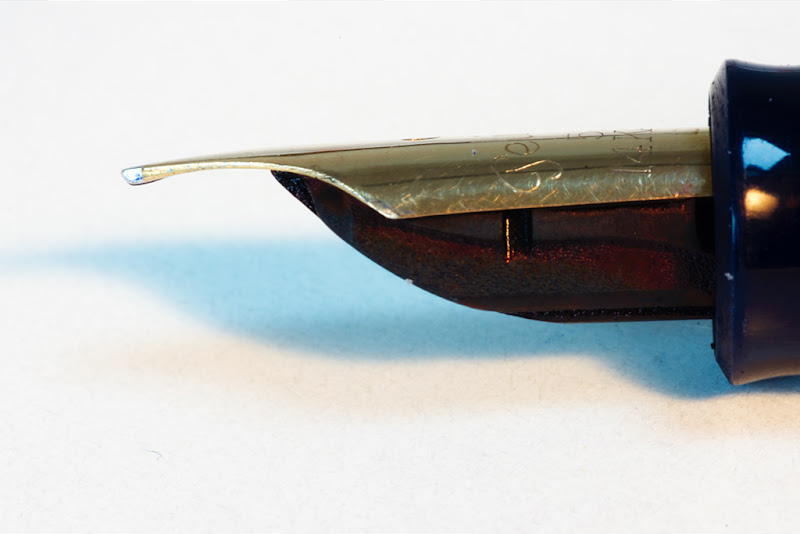 I have a liking for wider nibs and the idea that they are not suitable for normal lined paper is misguided. As you can see from the writing sample below, the script fits nicely into the lines.

In summary, this is a good looking, well made fountain pen with good ink capacity and great writing characteristics. It is perhaps on the small side compared to many of todays pens but it is entirely usable. I don't begrudge having to spend extra to bring the pen back to use as it will bring satisfaction for years and I paid a low price for it in the first place.

Great to see old pens being brought back to life! Congrats and enjoy in good health. That's one gorgeous pen. Thanks for sharing

That pen will reward you for saving it for many years.

I have a 140, striated in green, with a B nib. It writes much like yours, and is an absolute joy in terms of sensitivity and flair. Always a favorite.

That pen will reward you for saving it for many years.

I only paid for the work. The act of bringing it back to life belongs to Eric Wilson (Eckiethump on FPN) who has shown his skills on a number of my pens and is highly recommended if you need some work doing on a pen.

My pen photo galleries - Reorganised
Back to Fountain Pen Reviews