I saw this pen a while ago listed as "Lanbitou Flighter Pocket Rocket" at Hisnibs when I was curious about fountain pens, but hadn't yet bought anything. By the time I decided that I wanted one, Hisnibs was out of these.

I wanted one. I really wanted one, but I had no idea what it was called, so I didn't know how to search for it. I eventually stumbled upon it again, and bought it. Yay! 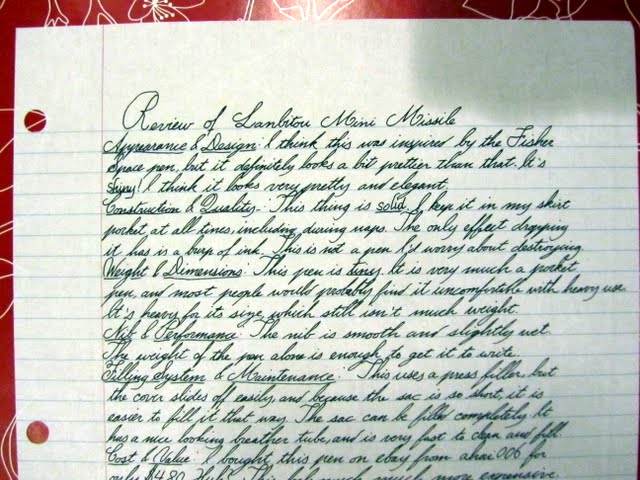 Appearance & Design:
I think this was inspired by the Fisher Space pen, but it's definitely prettier. It's shiny! I like the little gold band connecting the section and body. It adds a lot, I think. I think it looks very pretty and elegant.

Construction & Quality:
This thing is solid. I keep it in my skirt pocket at all times, including during naps. The only effect dropping it has is a burp of ink, and even then only if it's dropped onto tile or something similar. It's fine when dropped on carpet. This is not a pen I'd worry about destroying. I think it would take effort. Oh, the clip is super stiff, but I've mostly just kept it in my pocket.

Weight & Dimensions:
This pen is tiny. It is very much a pocket pen, and most people would probably find it uncomfortable with extended use. It's heavy for its size, which means it's still pretty light.

Nib & Performance:
The nib is smooth and slightly wet. The weight of the pen alone is enough to get it to write, but it behaves better with a bit of help (equivalent to the weight of a heavier pen, honestly).

Filling System & Maintenance:
This uses a press bar filler, but the cover slides off easily, and because the sac is so short, it is easier to fill that way. The sac can be filled completely. It also has a very nice looking breather tube, and it is very fast to clean and fill. 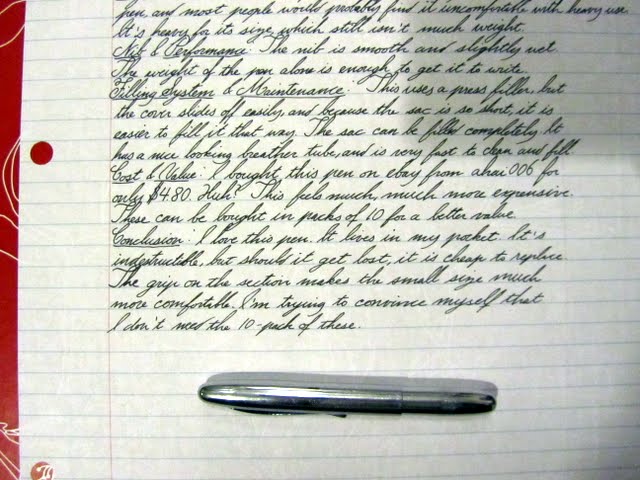 Cost and Value:
I bought this on ebay from ahai006 (no affiliation, but is known to be reputable, and ships super fast) for $4.80. Huh? This feels much, much more expensive. These can be bought in packs of ten for a better value.

Conclusion:
I love this pen.

It lives in my pocket. It's indestructible, but should it get lost, it's cheap to replace. The grip on the section makes the small size much more comfortable, although you absolutely must post. I trying to convince myself I don't need to buy the pack of 10. But I want more... 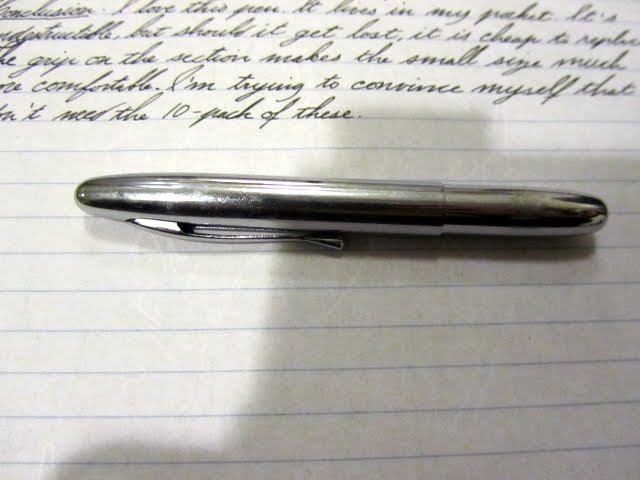 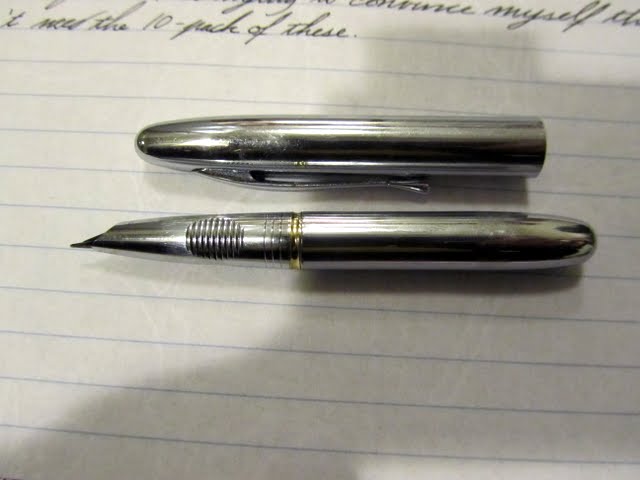 The sac is still pretty full, although it's been used a bit, so it's not full anymore. 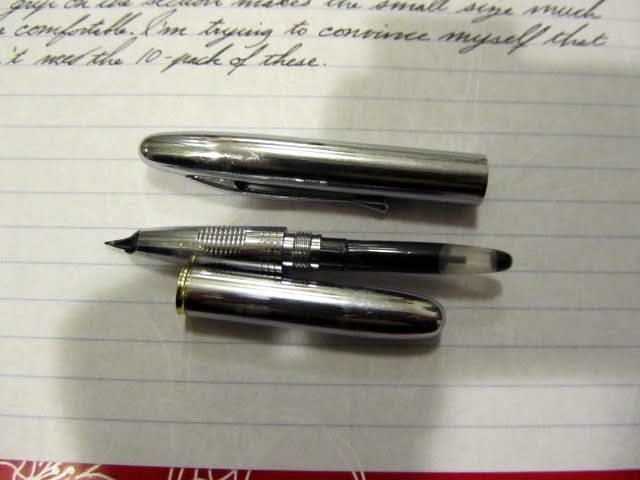 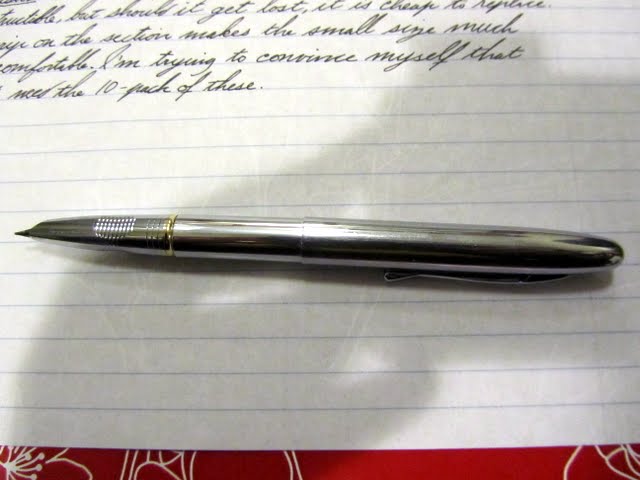 It's tiny! (I have fairly small hands, even for a woman. Also, they are stained with Diamine Claret 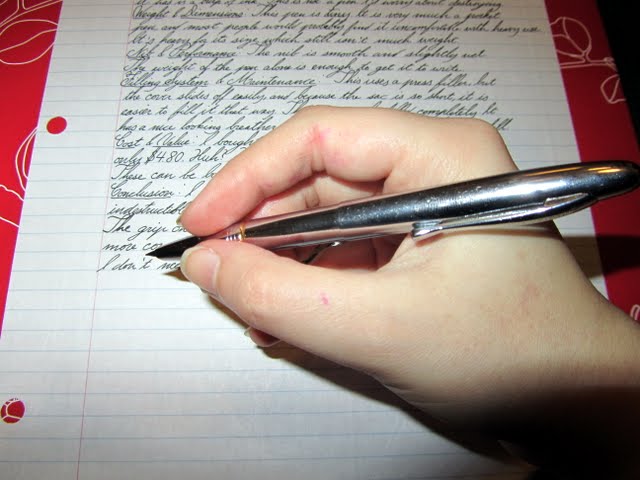 And this is why you need to post the pen. Unless you are 3, in which case you probably aren't allowed near pens. 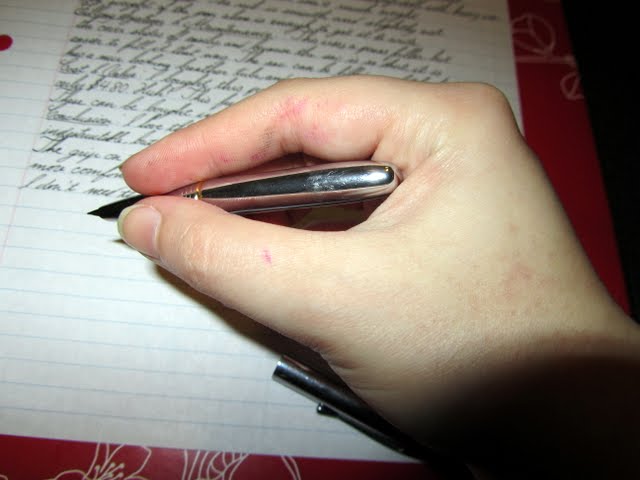 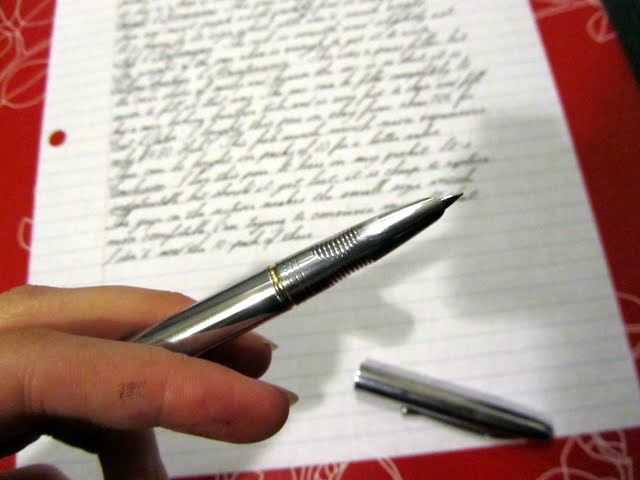 Nice! I will try to get one of these. Thanks for the review.

Neat pen. Nice review. This pen didn't make sense to me until I saw your picture with the cap posted. Then I got it. As always your handwriting is superb.

I have exactly the same pen with Jinhaostamped on the clip. I also got rid of the "sac cover + press bar" tobe able to have a complete fill.

It´s a sturdy little pen, great to have inthe pocket at all times.

Thanks for the compliment.

I have exactly the same pen with Jinhaostamped on the clip. I also got rid of the "sac cover + press bar" tobe able to have a complete fill.

It´s a sturdy little pen, great to have inthe pocket at all times.

Yeah, there seem to be three available bullet pens out there, although I haven't seen the Jinhao ones on ebay, only in people's reviews. The brands that carry these sorts of pocket pens are Jinhao, Lanbitou, and Yiren. The Jinhao's sac cover looks to be metal, while the Lanbitou's feels plasticky and is black. The Yiren's cover seems to be the same as the Lanbitou's, but it lacks the gold ring that the other two have. There are several models of Chinese pens that seem to be the same pen just with different finishes and branding.

Nice, but way too small and shiny for me. It'd be like trying to write with a greased pig in my sweaty mitts. Maybe it's a "lady pen?"

It is easier to stay out than get out. - Mark Twain

Cool! This was one of the first pens I reviewed when I joined FPN. I think this is the only one I've seen since then.

Thank you very much for your excellent review. I have been looking at this pen, from the same ebay seller, and considering a buy. Your review was very timely. Another opportunity to enjoy your beautiful handwriting was a bonus. Very well done.

Awesome! Just bought 2 from that seller for $7.90 with free shipping!

I got a couple of these too. I keep one in my jacket loaded with Platinum Pigmented Blue, works great for credit card slips. I paid more for mine from xFountainpens but they do have a black model.

Great review and wonderful handwriting. Thanks!
I have a similar Jinhao pen, and the nib is just amazing--maybe the smoothest I have.
ron

Thanks for the review and heads up. Please keep us updated should you have any issues with the pen (e.g. leaking).

Awesome! Just bought 2 from that seller for $7.90 with free shipping!

Lucky you. Both sellers I've found on eBay don't ship to my country... By the way, they seem to ship just to USA, UK and Germany only.

I like the curve on the clip and the interesting section. It seems to be of a similar size to my Wing Sung 703 and Hero 366.

I have the Jinhao version of the pen, and I agree with all your observations.

A question though: don't you find that with the need to post, the part of the barrel where the cap grabs onto while posted gets all scratched up? No deep scratches on mine, just a band where the metal seems to have been rubbed raw with microscratches. Not enough to cut through the chrome surface, but you definitely see a dulling to the previously shiny metal.

Saw this little beauty on Ebay and decided to check here for comments before ordering. Well, I'm sold, placing my order (2) now!

Late last year I bought 20 of these pens (or I think they were these pens) and gave 'em away at an SF Pen Posse. Those who tried their pens right then seemed to feel that it worked well... amazingly so for such an inexpensive little pen.

I bought one about a year ago, but have sadly lost it a few months ago.

It was a very smooth writer and was light enough to bring everywhere. I was only disappointed in that it scratched easily and the gold band you spoke of soon faded into silver. Though the ink capacity is pretty tiny, the fine nib seldom needs so much. Congrats!

My two fingers on a typewriter have never connected with my brain. My hand on a pen does. A fountain pen, of course. Ball-point pens are only good for filling out forms on a plane.
Graham Greene
Back to Fountain Pen Reviews