This is a short review of one of my grail pens, the Pelikan M800 green demonstrator. In addition, it is the first of four reviews I plan to write today. I've been lurking a lot recently, and I figured it was time to contribute again.

This pen was part of a very large Pelkan collection on consignment at Dromgoole's in Houston TX. Actually, there were two (two!) green demonstrators in the collection. Neither came with a box, which is not that big of a deal since this is the original late 1980's/early 1990's version, not the later (c1999) edition. The reason for a lack of box not being a big deal is that while the production run was limited, it was not packaged as a special limited edition. I understand the American distributor took to including special certificates in the boxes, but supposedly Pelikan never did so. Perhaps someone with more knowledge can clarify this. Anyway, I got the pick of the litter. By all appearances the pen had only been dipped, and it had a broad nib. Oh, what a nib, more on that later.

So, what do I like about this pen? First, the green color is super cool. Second, it is a true demonstrator from top to bottom. That is, even the tassie is transparent. Third, the Pelikan logo is stamped from gold plated metal. Fourth, the nib is an awesome broad. Fifth, it is an M800, and that is never bad.

The nib is everything you would expect from a Pelikan M800 broad. Juicy and responsive, smooth but not glassy, soft but not flexible, a wonderful medium for expressing your thoughts. The standard large ink reservoir means that that broad nib won't run dry too soon, and the balance, posted or not makes for easy writing. 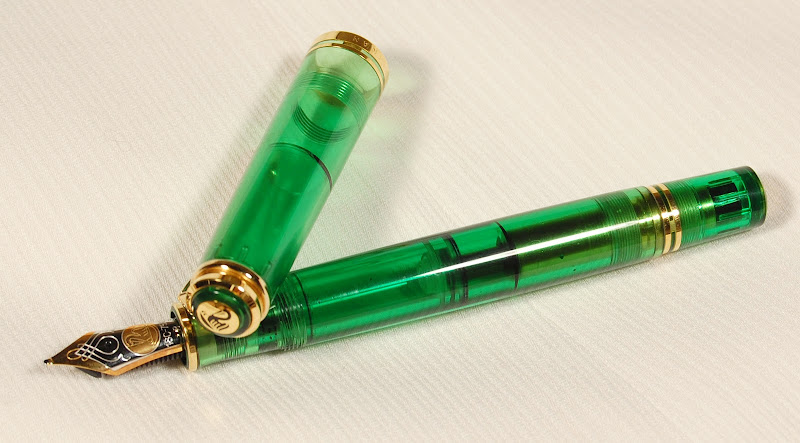 This is a grail pen for me. I've wanted one for years but could never afford it. I got lucky, right place, right time. It has great company alongside my red and green stripe M800's, and my yellow M910 Toledo. Those four pens sit lording over my other dozen or so Pelikans.

As you can see, I have inked it up and love using it. It especially liked being fueled with Noodler's Purple Martin.

Beautiful pen and I think is only 3000 pieces or so in the market.

"Ignorance of all things is an evil neither terrible nor excessive, nor yet the greatest of all; but great cleverness and much learning, if they be accompanied by a bad training, are a much greater misfortune."

Such a beautiful pen! I wish the green and blue 800's had been and were still regular production pens instead of special editions.

Colour is its own reward - N. Finn

Wow. I have never seen this pen before. Beautiful.

I have just arrived at the conclusion that I need another bird.

And yes, I know it's bourbon.

Congrats on getting a fabulous pen. I have one myself, I purchased it in the early 1990's. Broad nib like yours. Oh baby...

As far as I recall, it did not come with anything but a plain box, although I've seen certificates such as what you mentioned with others for sale on ebay.

This is a totally, totally cool pen. I wish I had a spare in case I ever were to lose it. I have a "working" Blue Ocean M800 and a "spare" that's MIB that I bought years later, one of the last ones FPH had. By the time I had enough disposable income to do that, I couldn't find another green demonstrator -- although some come up for sale occasionally (usually when I've had unexpected home or car repair bills, grrrr!).

Of my three Pelikan M800 demonstrators (green, blue ocean and clear), the green is my favorite, hands down...

Use it in good health and enjoy!

Not all those who wander are lost. J.R.R.Tolkien
Back to Fountain Pen Reviews