87 replies to this topic

When I received this package, I was so pleased, because I really adore my Hero 616, and that's what I thought I was getting. I bought from an American ebay seller. When I opened the package, it was clearly not the same pen. The cap looked different and the plastic felt cheap and disposable. After I rinsed the pen (with soap and water, as always), the sac turned milky and white and I found a small hole in it. 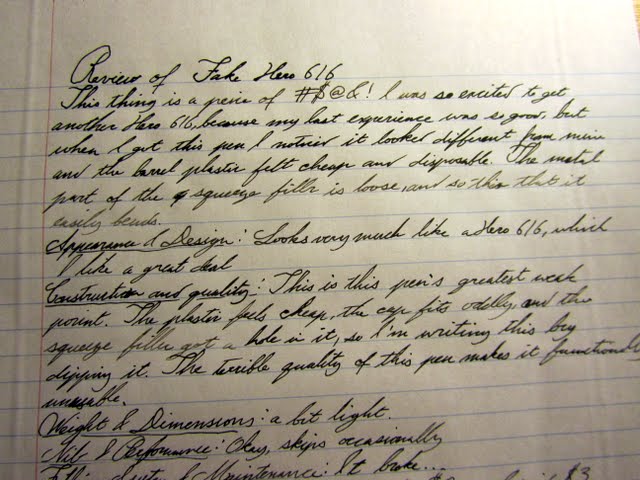 This thing is a piece of #$@&! I was so excited to get another Hero 616 because my last experience was so good, but when I got this pen, I noticed that it looked different from mine and the barrel plastic felt cheap and disposable. The metal part of the squeeze filler is loose and so thin that it easily bends.
Appearance & Design: Looks very much like the Hero 616, which I like a great deal.

Construction & Quality: This the pen's greatest weak point. The plastic feels cheap, the cap fits oddly, and the squeeze filler got a hole in it, so I'm writing this by dipping it. The terrible quality of this pen makes it functionally unusable. 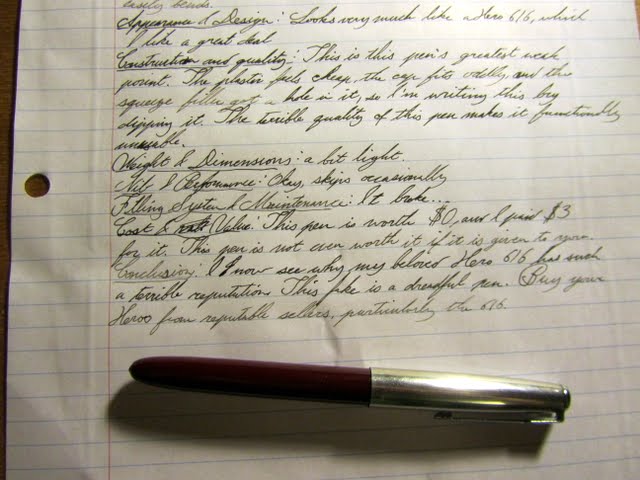 Filling System and Maintenance: It broke...

Conclusion: I now know why my beloved Hero 616 has such a terrible reputation. This fake is a dreadful pen. Buy your Heros from a reputable seller!

For more information on fakes of the Hero 616: YesPen's Ebay Guide

This thread. It has much better photos than mine! 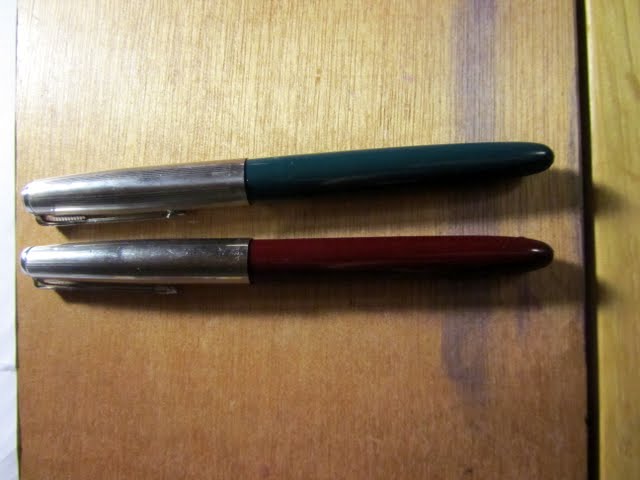 The one of the right is real. 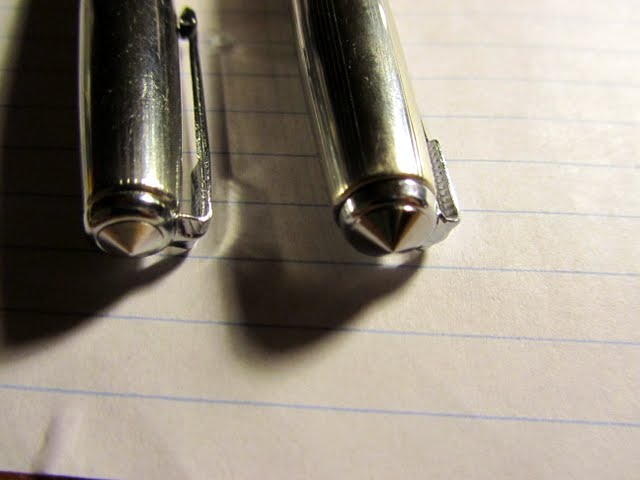 The real one has a much larger sac. 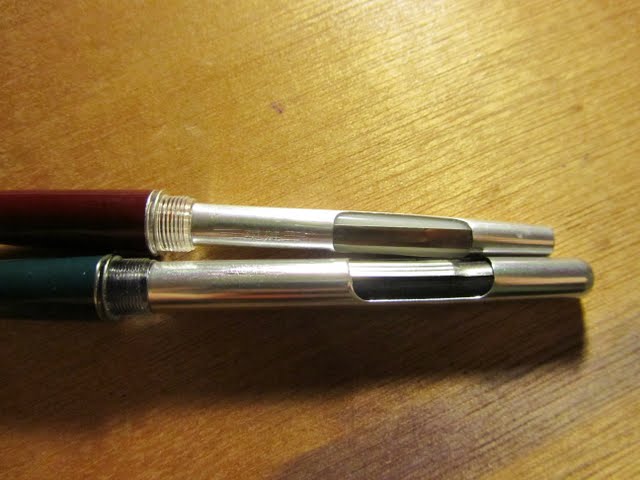 The fake's sac turned milky white after being washed.

It feels cheap and weak. The real one is filled with Noodlers Black. 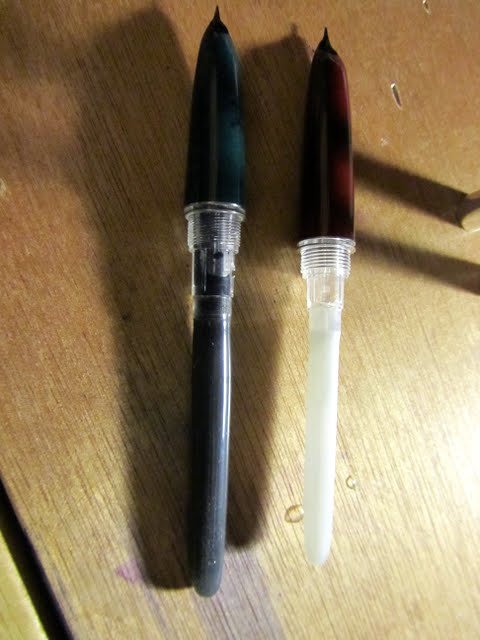 I ordered a 10pk from a Chinese seller 2 weeks ago and have been impatiently waiting for them to arrive! Unfortunately it's a bit hard to tell if it's real or fake from their pictures sometimes. Have you emailed the seller? Maybe you could work something out.

Thanks for an excellent review and for bringing attention to the counterfeiting of Hero 616's. I was bitten a few years ago when I got a 10 pack for about $10 - at least the sacs were good in mine and I got 10 cheap sacs for use in repairs! In my experience it is hard to convince others that such a cheap pen is counterfeited, hence the bad reputation persists. My genuine 616's, while not of Parker 51 performance, do get remarkably close to that great pen considering their low cost. In my experience it is worth paying a dollar or two extra and buying from a reputable dealer such as Isellpens (no affiliatioon, just a satisfied customer).

It is just amazing that people go through the trouble of faking a pen that is essentially a fake to begin with...That said, both of my 616s perform flawlessly and I did buy them from the seller mentioned above.

My real one is also from isellpens (they were even on sale!) It seems like the other pens are much, much safer to get on ebay than the Hero 616 is, because they aren't as well known, so they aren't faked.

I have not managed to resolve it with the seller. While it is a fake, and I'm not sure how to approach that in terms of giving rep, it was a very cheap one, and honestly would be irritating to return.

What a very good idea for a review. I knew how to spot 616 fakes, now I know what an awful pens they are to live with too. I'm loving the real 616 jumbos, use them every day

i dunno... could it be that the "fake" one is actually the standard while the "real" one is the jumbo?

i dunno... could it be that the "fake" one is actually the standard while the "real" one is the jumbo?

No, the pens are the exact same size, although the proportions are a bit different. The Hero 616 jumbo and the standard Hero 616 are different sizes. Furthermore, there is not a reputed quality difference between the two, and just from touching the pen, the quality difference is obvious. They are made very differently. For example, the hole in the end of the barrel of the Hero 616 is smooth. The fake's is very ragged. Everything about it clearly screams out fake. (And if you are wondering why you'd fake it... there is profit to be made, and this is from China, where a smaller amount of money gets you much further).

Just to add another comment, there appear to be more than one manufacturer making the fakes, and some are harder to spot. Telltales can be things like poor engraving of the name and of the lines on the cap, poor formation of the shroud around the aeromatic filler, poor tips on the nib etc,, not to mention the poor performance when you try to use them (by then, it's too late of course). In the multi packs, the printing on the blister pack is slightly sloppier and the hologram seems less well defined. All of this shows that it can be very difficult to spot the fakes if you don't actually have them in your hand, which is why I recommend always buying this pen from a reputable supplier - they are still a bargain.


By the way, these are not the only counterfeits in the fountain pen world. A counterfeit is a pen not only looking like the real thing, but also labelled as the real thing, so I don't include look-alikes, work-alikes that have a different name here. There are the very obvious MontBlanc knockoffs that bear little relationship to the real thing when you get down to filling mechanisms etc., and then there are the extremely good counterfeits of the Parker Sonnet ("good" does not mean AS good....) - see http://www.stylophil...7-06/07sonn.htm I don't know of others, but I am sure they are out there.

Wow... knockoffs of the knockoffs... a new low, even for Shanzhai...

This is a surprise. I bought 10 at the London Pen Show in 2009 from a reputable seller to give away basically.

I have just two left, those two look like fakes to me.

I have to say that they behave perfectly, at least as well as a Parker 21, for example.

i had a few of the fakes and a couple of real ones (bought from isellpens) and to me they write the same.

I don't know whether the lower quality ones are the "regulars" or not - the main difference for me is that they don't fill as well, and the fit and finish of the cap is poorer. The nibs are about the same.

I recently ordered another "Jumbo" just so I'd have a backup - I now have three and the others are the cheapies. I'm giving those away bit by bit...

<i>"Most people go through life using up half their energy trying to protect a dignity they never had."</i><br>-Marlowe, in <i>The Long Goodbye</i>

OK, so Hero does a knock-off of Parker, and now someone is knocking off the knock-off?

I think I'd rather use a nail. At least if it didn't write well, I could use it to build something; instead of just crushing it under my heel.

Why not just get a Lamy, Pelikan or Waterman? I think it would be much more economical in the end, and you would even have a warranty.

OK, so Hero does a knock-off of Parker, and now someone is knocking off the knock-off?

I think I'd rather use a nail. At least if it didn't write well, I could use it to build something; instead of just crushing it under my heel.

Why not just get a Lamy, Pelikan or Waterman? I think it would be much more economical in the end, and you would even have a warranty.

It's not. A real Hero 616 is a rather lovely pen, and easy to obtain if I pay attention to who I'm buying it from. It's $5 from a reputable seller. I'm a college student, and fairly convinced that most fountain pens marketed in the US fall firmly in the category of 'luxury good'. I should hardly be buying luxury items prior to having a decent paying job. I have had absolutely zero trouble with my Hero 616, although I guess like any squeeze filler, it'd eventually need its sac replaced.

I got a batch of the fakes, too. They look ok, but next to the real 616, much cheaper build. Also, I have one by one experienced leaks from the nib or sac in each one I've used. Several of the nibs were very good---just the build quality won't hold up through multiple loads of ink.