33 replies to this topic 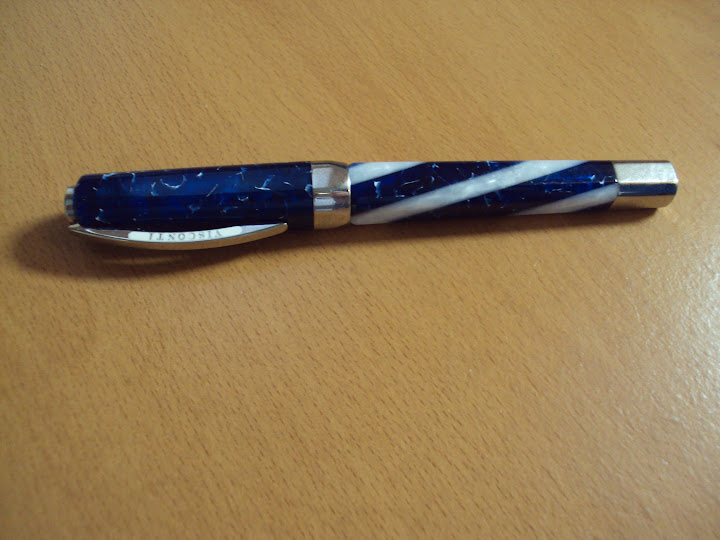 What a beauty, aint it? Today I'll be reviewing the Visconti Opera Elements Water Palladium Extra Fine 23 kt. Nib! When it arrived and I opened the box, while my heart was beating faster and faster, my first thaught was: damn, what a gorgeous beauty.

Well, a photo explains more then my words can say. To me it is the most beautiful pen I ever have had in my hands - probably not the most beautiful pen that exists, however I can not come up with an example of a more beautiful pen right now. The very rich blue color, representing one of the four classical elements, water, really is a speaking color, it's a bit dark, I'd describe it as a blue that is heaven like. On the cap, which has less than the body the white stripes, it looks like a heaven with stars to me.
The white "stripe" represents an element you can find on all of the four pens: soul, spirit.

I must admit I did not bought it for that message, the elements and spirit kind of thing, to be honest the pen just blew me away with its looks the first time I saw pictures of it on the net.

Any score lower then 10/10 would be inappropriate. 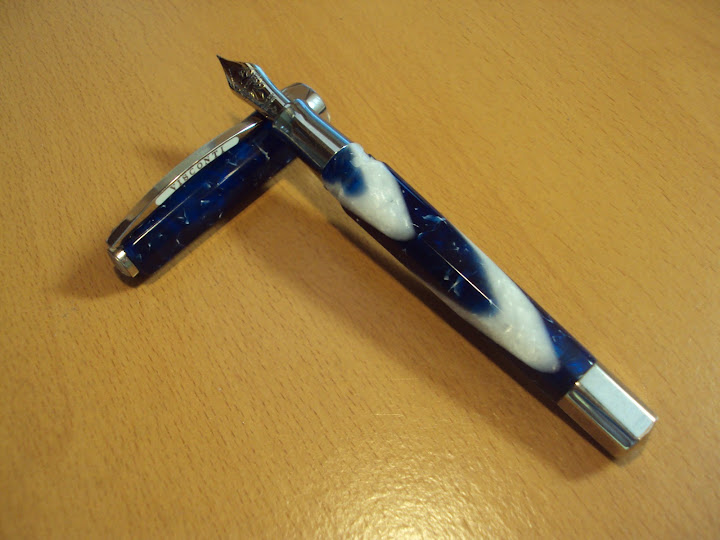 It is a c/c filler. I currently do not own any pens that fill in another then this. The pen probably is big enough for a piston filler system. It would have been nice, but I'm not missing it, since I always have had c/c fillers.

The converter itself is quite nice. On the top you have the Visconti logo and some nice engravings. It is the most luxurious converter I've used this far. 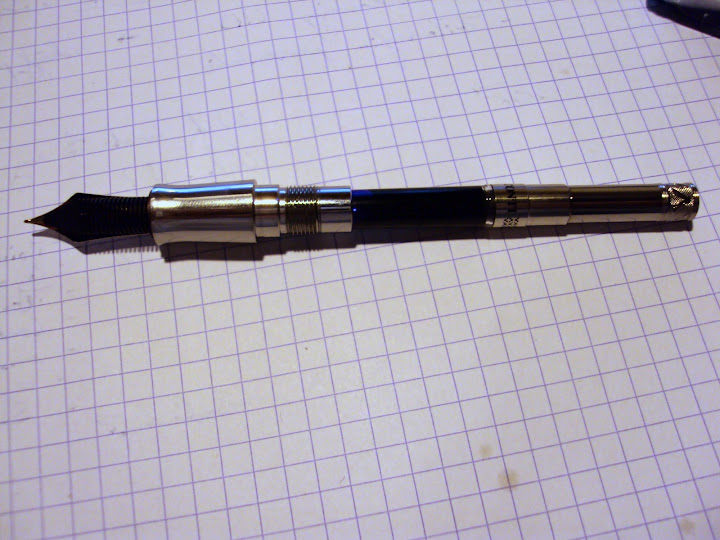 With the filling I've experienced that if you have a bottle which is not very big, so if it is not deep, you might not be able te fill the pen. The nib is quite big, not huge, but bigger then the average nib. The first time I's filling there were a lot of bubbles, and there was air in the converter. When using a bottle that is not half empty, or a bottle that has a better shape in general, that will probably be less of a problem.

Therefore, and for the fact that on a quite expensive pen the chose for a c/c was made instead of a piston filler I'll award it with a 7/10 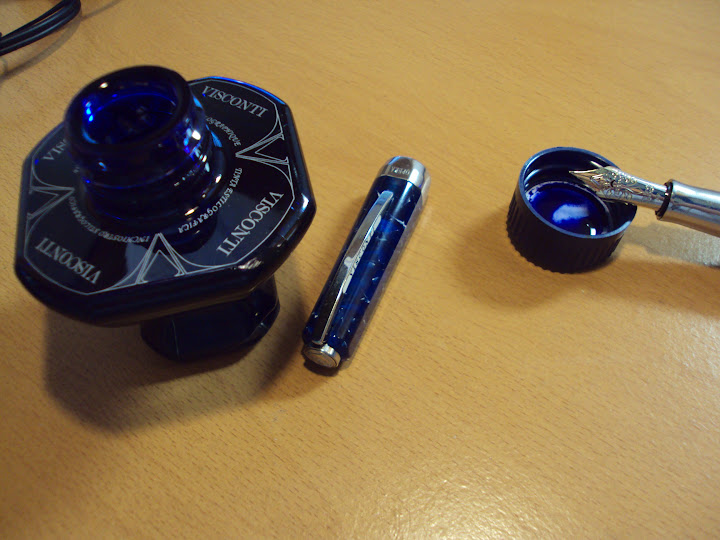 A Visconti pen with Visconti Ink. Very Nice ink, btw. When I was going to the stationary store to buy this pen a decent pouch I discovered that they also sold Visconti Ink. For my pens I've the system that every pen needs his own ink color, and what is better then blue Visconti ink for a blue Visconti?

This pen feels very solid. It is quite have if you compare it to a Sheaffer Targa, or Sailor 1911 for example, but it is well balanced. I do not post it, for two reasons:

- It's balanced well enough when not post
- The shape of the pen is faceted which is not ideal for posting, and I'm afraid I'd scratch it...

The pen has a real good closing system. It is difficult to explain - especially while English is not my native language - but you sort of push and then it is screwed automatically safe on the body.

The clip is Visconti's trademark clip, which is nice and decent. More rigid then I expected based on the photo's yet still, excellent (I actually do not use the clip of fountainpens much, or even never)

The nib is a very nicely engraved two tone 21 kt. Palladium extra fine nib. My handwriting is quite small, so I definitely wanted this nib instead of the gold fine one.

The engraving is nice: 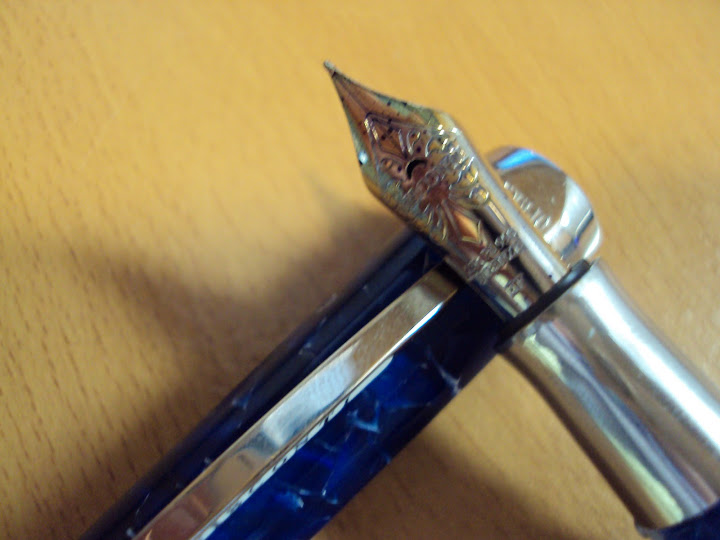 Enough about looks, the writing experience is what counts!

The pen has a steel section. For some that is a point of no return, many of you will not buy this pen for this reason. I liked the pen by its looks, like I stated earlier on, and I taught: well let's try it nevertheless, take the risk. I have no regrets, I can write for hours (actually, besides this review which is typed I've not done anything else then to write with this beauty) without having any problems. However the reason for that may be that I have my hand quite high on this pen when writing, almost more around the hars rather then the steel section itself.

The nib performs very well. It is a bit scratchy on very cheap rough paper, but on most paper it is good!
(Thin paper seems not to be a problem, the structure of the paper is more important with this nib: your paper needs to be a little smooth, then the only thing you have to do is to dance above the paper.)

It performed really well on my Rhodia Webbie: 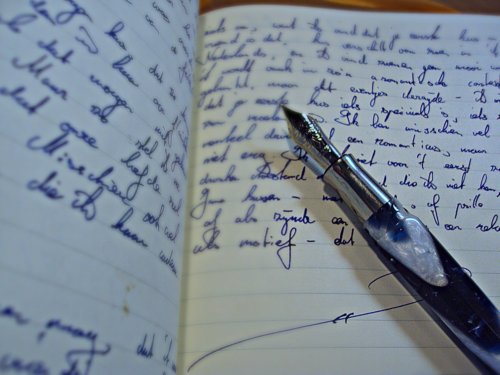 While not suitable for the roughest and cheapest paper, a dream on average or good paper: 9/10

I paid $300 for this pen. In my opinion definitely worth it. It is not cheap, but a decent price for the amount of pen you get. A lot of pen!

I got it at Bryant's web store (pentime.com) no affiliation intended, just a very happy customer.

This pen is not longer produced, but if you can get your hands on it, do it, it is an awesome pen.

I do not like math, and am therefore not going to make an average calculation, this pen is for me just: 10/10

With the kindest regards to anyone on the forum, 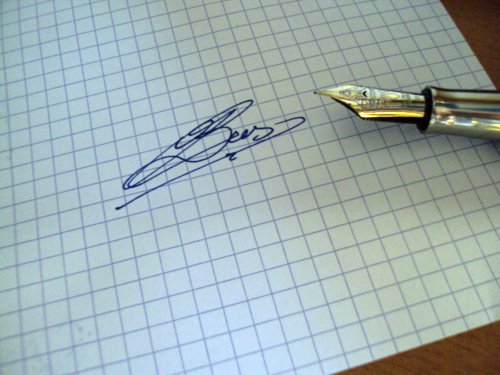 Congrats on your new pen! I have an Opera in Typhoon Blue and really love mine - even without the palladium nib. Mine was purchased from John Mottishaw - and adjusted for optimum flow by same - and writes beautifully on every paper out there. I hope you enjoy yours for a long time to come, as well

Great pen. I believe that it would be a great pair with bsb

Yes I confess, I am still using my Jotter

Great pen. I believe that it would be a great pair with bsb

Bsb? What is bsb, never heard of it!

Yes I confess, I am still using my Jotter

Ah! Will try that someday! Thanks. Not for sale in Holland I guess, so that would mean high shipping costs...

Me: The more the better
My bank amount: ...
*sometimes silence says what needs to be said*

No just kidding, more friends would be fun!

Ah! Will try that someday! Thanks. Not for sale in Holland I guess, so that would mean high shipping costs...

Try Niche Pens (in the UK):

Or The Missing Pen (Germany):

Shipping shouldn't be too prohibitive from either of these retailers.

That is certainly a striking pen. I imagine it is even more so in the flesh. I have some blue pens, even blue Viscontis, but none that can compare to yours. Congratulations.

Ain't it nice when a pen blow one's mind...Enjoy your new pen
and...Congratulations!

One of my Visconti's is a c/c filler. Their converter is the nicest converter I have.

I believe the Opera is only marginally smaller than the Wallstreet LE which has Visconti's fanciest filler - the double resevoir power-filler (which is a variant of the classic vacuum filler). Which is one of my favourite filling mechanisms; however, I have nothing against c/c fillers. The pens in my collection have a variety of filling mechanisms and they each type has it's benefits and drawbacks, so it's just a matter choosing the tradeoff that works best for you (or of sampling them all).

I had a single Visconti household for almost a year. But in the last few months I've acquired half a dozen of them....

The Opera Elements Blue "Water" is a very beautiful pen as the others in the series like the Grey "Earth", Red "Fire" and Yellow "Air".

A very nice review. Thanks for showing the pen.

Most of time, c/c doesn't suit me very much, however this Visconti converter is pretty beautiful! I want one!

Where did you buy this pen?

congratulations!wich color did you choose?