I got this pen almost on a whim for $30. The Hero 200A is a near-copy of the classic Parker 75, right down to the arrow clip. It comes with a 14K gold nib, which is crazy at this price point. 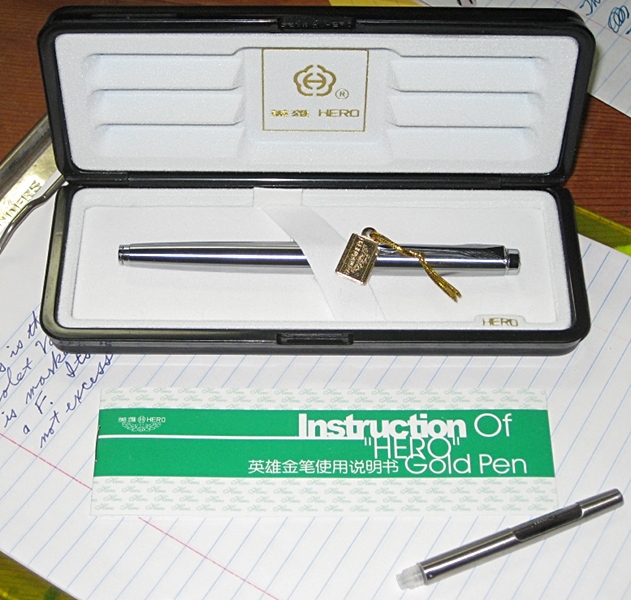 For a while now I've been looking for an inexpensive (let's say under $50), decent quality pen that accepts international cartridges and converters. This I felt would be a great recommendation for beginners as their first fountain pen. This is one of the few pens I've found that measured up.

Even though the nib is gold, I have to wonder about the alloy used -- it looks sort of dull and almost bronze-like. It's also a nail! I think this is a true "manifold" nib that can handle carbon forms. It should be perfectly OK to loan this to ballpoint users; I doubt they'll manage to harm it. As a bonus, it writes just as well with the back side (though slightly finer), so anybody who doesn't know how to orient the nib to the paper has two chances to get it right.

Flow is what I'd call medium or perhaps slightly dry-ish. The nib is marked M, but to me it writes more like a western F nib -- which I like, and I think also is a good choice for beginners. It's not scratchy (and my example had its tines well aligned), but it does have some feedback. This is the sort of nib that can be very smooth when used on premium paper (such as Rhodia), but becomes draggy when applied to cheaper and rougher paper. Just like with a good sports car, you'll feel whatever surface it's running on. 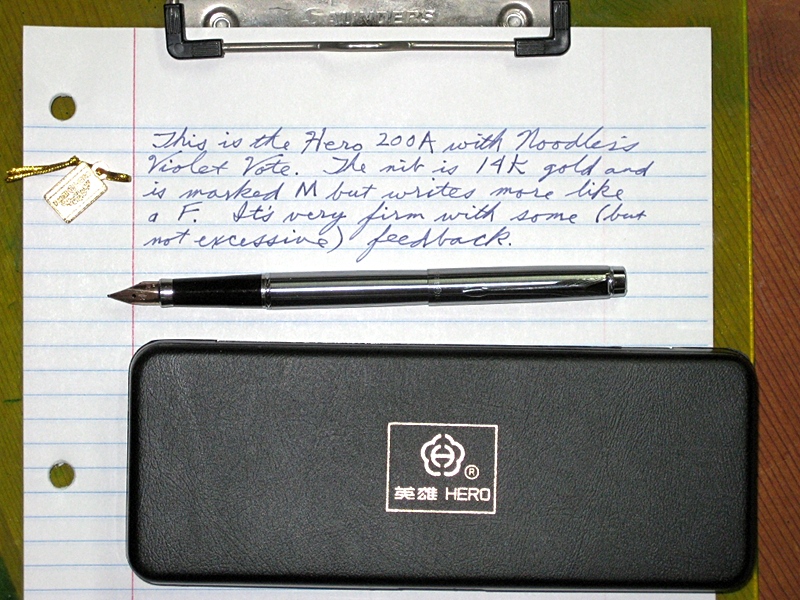 The pen comes in a presentation box which is actually nice. I've complained before about the modern fashion for huge, elaborate, clumsy presentation boxes. This one hearkens back to the 1960s when boxes were more practically sized. The shell is plastic, but is textured rather convincingly and doesn't exude cheapness.

The 200A is slim and elegant by comparison with a lot of modern pens, but its metal body gives it a subtle heft. The cap goes on with a firm, positive snap, and it's not vented. I believe it should prove resistant to drying when capped. The cap also posts well.

I do have a couple of nitpicks. The barrel threads have a slightly gritty feel. Also, the "ball" of the arrow clip has a seam where the metal edges are folded together, which is a bit rough. It doesn't go onto and off a pocket a smoothly as some.

My 200A came with a converter installed. At a glance it looks like the filler in an aerometric Parker 51. However, there is no breather tube, and it works just like the common Sheaffer squeeze converters. The sac is opaque, so you have no way to check your ink level. Although I'm sure this converter is perfectly usable, I was also pleased to find I could swap in a Schmidt K5 converter with no problem.

In summary: This is an amazing bargain, should be a great pen to recommend for beginners, and is a practical and efficient design that could easily serve as a daily user.

I have similar experiences with mine, which I have had for several years. My nib had a bit too much tactile feedback at first but after several hours of the brown paper bag it is now a sweet writing instrument. I like the heft of the pen. But as stated in the review the machining is a bit primitive. Nice review.
PMS

I really like this little pen, too. It has been my "Texas Bluebonnet" pen and in daily use since I got it some months ago. Description of how it writes matches my experience (nail, slightly dryish). It's not as smooth as some of my pens on bad paper, but on my everyday legal pads, it's smooth enough. It does resist drying up - always starts right away. It has an elegant look; people have commented on it when they see me using it in the office. It certainly looks like a more expensive pen. It's a favorite.

Looks pretty impressive and slim... Surprising though, this is with a gold nib....

Nice review, but is it possible to have a few specifics (like length, diameter & weight)? It looks similar to a P75, but I don't have one to compare against my other pens..

I have one of these, and am always surprised by how much I like it when I pick it up. I do agree that it's a nail, but that's not always a bad thing. It would make a nice "first fountain pen" because it's easy to use and reliable, and I think the nib could stand up to a little abuse. It always starts right up, too, no matter how long I've left it. It definitely looks more expensive than it is, and for me, it has a nice weight and size, but it might be too skinny for people with big hands.

I keep thinking I might give mine to a friend, but then I use it and decide that I can't part with it!

After I had been using it for a while with the Schmidt K5 converter, it started to leak a little ink from the section -- through the gap where the plastic and metal parts of it join. Ink on my fingers, yuck!

I switched back to the original converter that it came with, and I haven't seen a recurrence of that problem. I'm still not 100% sure it was the converter, but it does seem likely that the K5 just didn't seal quite right.

Bought this to compare with my Wing Sung 400. It is good but a bit scratchy. Better build than cheaper Hero models, but not as good as parker 75. The nib scratchiness it not too bad and I think will be smooth after some uses (not yet there) and I would not be bothered with smoothing it up. Mine has F nib and writes on the dry side. I guess one full fill of ink will last many pages, but the ink colour is not very deep. Wing Sung 400 has better build quality overall. However, for this price I can't complain on Hero 200.
Parker 75 is still the best compared to the "inspired" copies, but for everyday use I think I will stick with Hero 200 / Wing Sung 400.