17 replies to this topic

a recent review on a Bexley Sterling silver Anniversary.

The fountain pen review page has been re-done for easier viewing. Do drop by to see other reviews 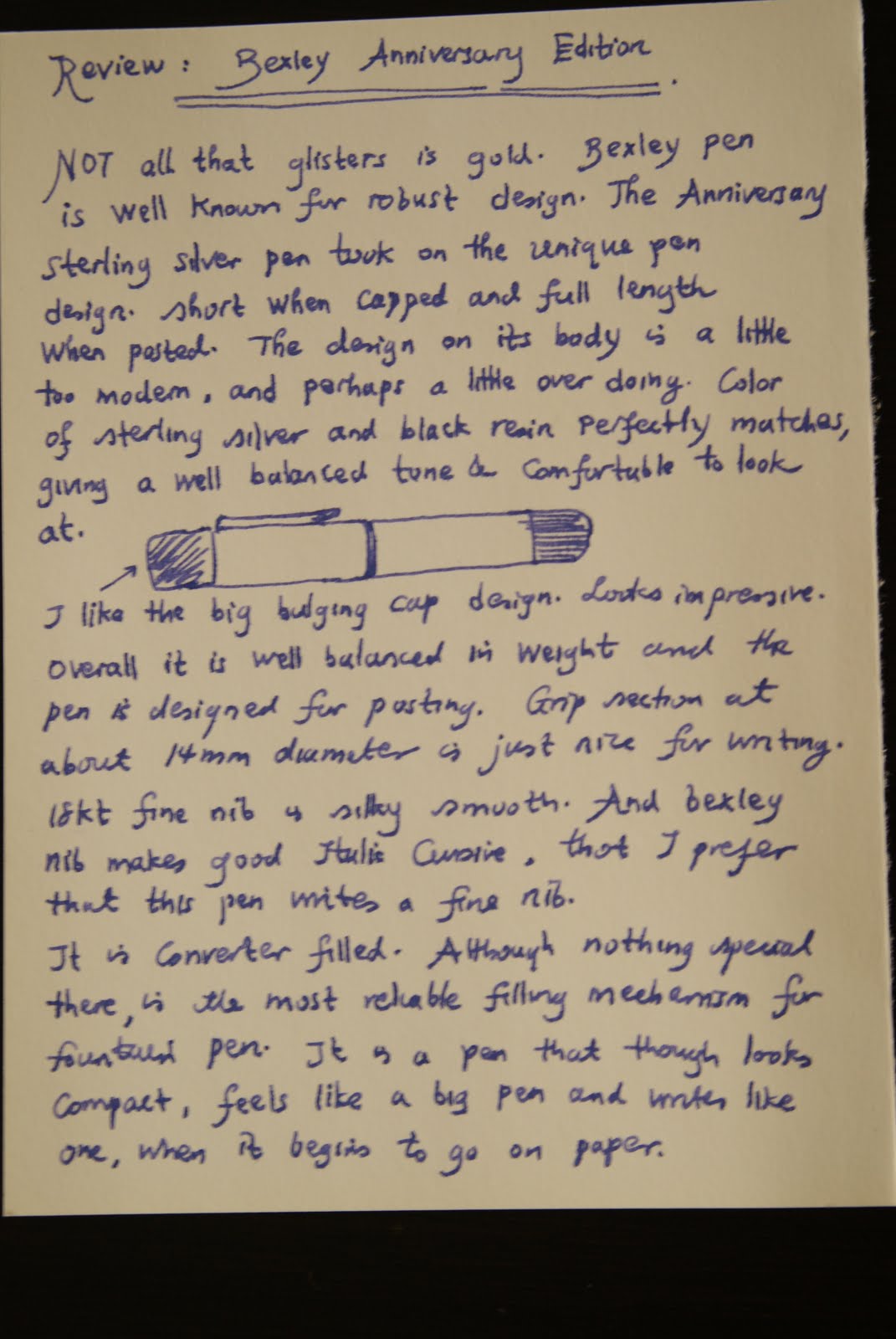 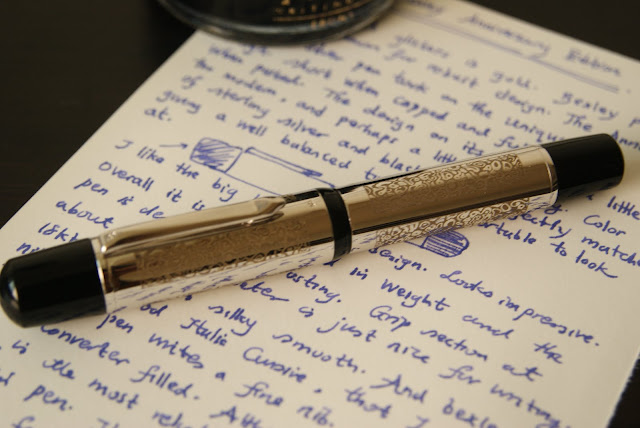 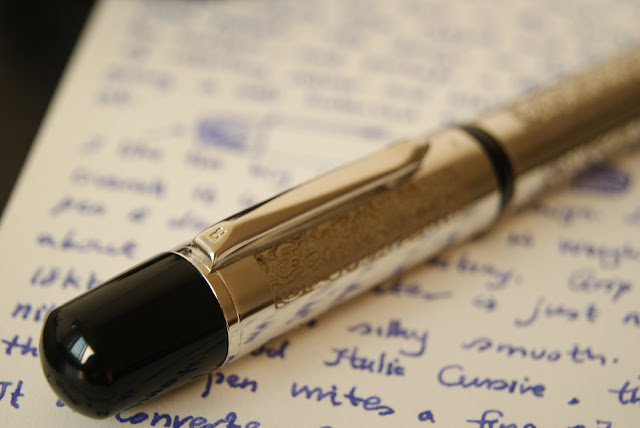 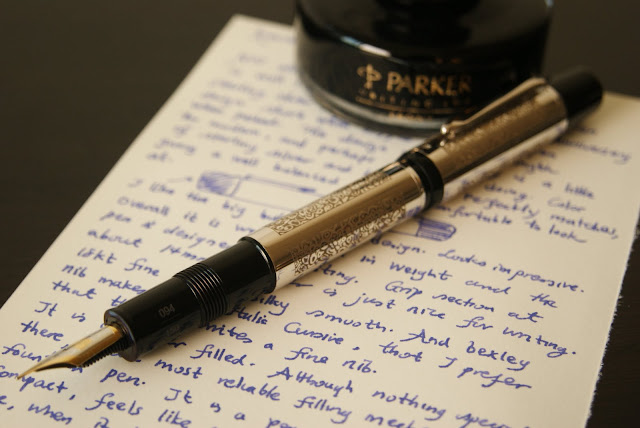 Do you have size information or size comparisons? Many thanks for this review which I enjoyed reading tremendously as I have an identical one to this Bexley in sterling silver (not the vermeil version). A minor point where I slightly disagree with is where you say that the design of the body is a little "too modern". To my eyes, it is in fact very similar in design to the vintage Pelikan 100. Vide this link and judge for yourself:-
My link
I suspect that you were perhaps referring to the engravings (not sure if that is the proper word) on the silver?
Otherwise I agree with all you stated and I really think it is a fantastic pen and am very proud to be in possession of one of these Bexley limited edition pens.
So again, many thanks FP Writing for your review and thanks for the link to your site which I will be examining further.
Mario

Lovely pen! Thanks for reviewing it.

I'll bet it's way out of my price range... But then it's probably worth it too...

This Bexley is the 2008 Owner's Club pen. It is the Poseidon size/ model.

This Bexley is the 2008 Owner's Club pen. It is the Poseidon size/ model.

A bit off subject but... Those are some gorgeous pens! Love the DJ 51 and Pelikan. And the other two are amazing...

This is the first Bexley to truly catch my attention. I like the company and want to like their products; however, my reaction to their other other products has been: nice, but not quite what I want (for example I love the look of the Ranger but it just isn't big enough, and the Imperial is another favourite but I'd prefere an Edison Herald Grande).

that is one gorgeous bexley

Thanks for your great pen review. That is a very beautiful pen. Enjoyed it a lot. Thanks I've had mine for three years, used regularly, and it looks as good as it did when it was brand new. It's plated, so it doesn't tarnish, and the finish is relatively robust. I don't bang it around, but I don't baby it either. It's a well-built pen.

Not a fan of Bexley but this is certainly a beautiful pen. Reminds me of a montblancs Marcel Proust

I love my '08 BOC, everything about it (albeit with a couple of niggles, or uncertainties really), everything except the nib. Oh, it's a perfectly smooth 1.1 stub nib; no problems there. It simply glides over paper. I'm no expert on stubs or italics in all their grinds, but this nib just seems not very crisp at all, putting down obese lines in both axes, forcing me to write bigger than is my norm. Obviously, though, the nib is aesthetically absolutely stunning, but I find when I want to use an italic-type nib I reach for my 78G with the B nib. It's probably just me - not knowing what to do with this nib, how to properly use it.

I've thought about having it reground, but decided against that, opting instead to keep the original nib original, lest it lose value. Of course that means I wouldn't be using the pen, which unfortunately is the option I've been mostly pursuing. I dig it out and play with it a little now & again, and admire it, but I'd like to actually use it. It's a pen. Meant to be used as one.

There's good news though: I see IPD sells, and grinds to order, nib/feed/section units for these. Finally, there may be joy! Only thing is, the two options are non-Bexley-branded 18K Bock nibs or Bexley branded steel. So I suppose I'll go with the latter to keep the original look. That decision became firmer today as I was just delivered a Bex Prometheus with a F nib, and I swear that nib is in that lofty class of nibs which are the smoothest I have ever experienced. I'm thinking a 0.9mm or so cursive italic.

So that's settled. Now the niggles: I wonder how it'll wear over time. One thing is that the serial number is laser (I guess) engraved on the grip portion of the section, as can be seen in FP Writing's last picture (above). The gold pattern plating on the on barrel and cap feels fairly thick, but as we know, gold plating wears off (maybe it's a relatively hard gold alloy; I don't remember). Still, I likely won't live long enough to see that happen, and even if I do, it's sterling underneath. Heck, I'd have bought this pen if it didn't have a lick of the gold plating, though it is very nice looking with it. Encouraged by Reprieve's words, above. Oh, and Michael Bradley, at the very least it's sterling. It'll look good.

In all, I think this pen is well built, beautiful, and in good taste. It has good heft, as a silver pen should, and just feels good in the hand. Silver has a special quality that moves me, speaks to me you might say. It's a pleasure just to hold it and admire, feeling its warmth. I'm honored just to be its steward, as it is a bit ostentatious for me.

I may not have been much help, but I DID bump your thread up to the top.