It's only been a few months that I've been using fountain pens again after a lapse of several decades. I used an Osmiroid in college but rarely since. I started re-learning calligraphy recently and bought a couple of Lamy Safaris, then, in searching for calligraphy resources on the web, I discovered the FPN.

The whole world of fine pens opened up, and I was a goner!

My gateway pen was a Pelikan 200 with a crisp italic nib from Richard Binder. What an eye opener! When I found the gorgeous Pelikan M800 B-0-B and could get it with an italic nib and for an amazing price from Pam Braun, I got it. But, the smooth writing of the Pelikan nib made me curious about what Richard's cursive italics offered. I also felt the P 200 was a bit small for me, and the M800, while not uncomfortable to use, was a bit large for everyday use, especially with the broad italic nib. So I ordered and just received a beautiful green striped Pelikan M600 with two Binder cursive italic nibs, a 0.7 mm and a 0.9 mm. So far, I've just tried the 0.9 mm nib, and I couldn't be happier with the pen or the nib.

The M600 format seems just perfect for my hand, and the green striped barrel is gorgeous to my eye. The fit and finish seems flawless. The piston works smoothly. The whole pen reeks of quality design and workmanship.

I had a bit of a problem getting any ink flow after loading the pen, but I finally got it going by partly emptying it. I suspect there was air in the channel or something. Once in gear, the flow was perfect, and the nib writes super smoothly. The cursive italic is much more tolerant of imperfect contact with the paper and still gives a very nice line differentiation when positioned properly. 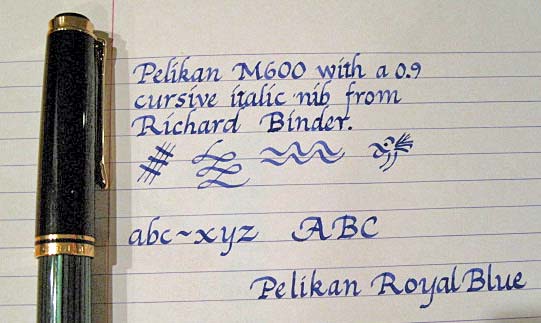 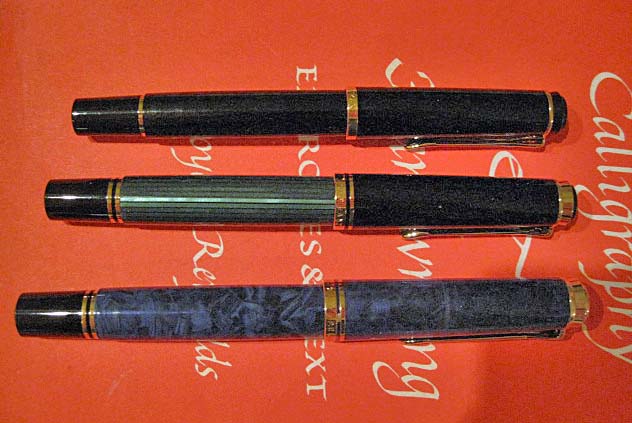 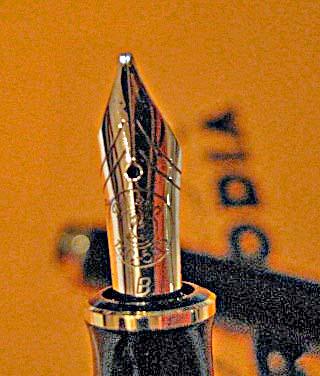 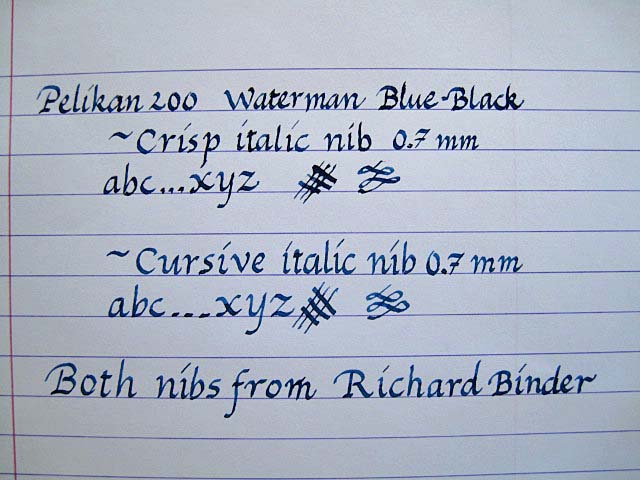 My Pelikan M600 in black with an OB nib is my latest pen acquisition.

I shall have to see if Mr Binder can supply me with a 0.9 mm Cursive Italic nib

Excellent italic nib! Perhaps, I'll go send my M800 1.5 IB nib to a good nibmeister (Mr. Bind... or Mr. Minusk...) to regrind into a 1.5 crispy italic. M800 Italic Broad from factory is an awesome nib, very smooth, good line variation, but it's something between a cursive italic and a stub. I prefer bold italic nibs (1.3 - 1.5mm). Even italics 1.1mm, like Stipula, are a bit narrow for my tastes. Thanks for sharing!

Sorry for the stupid question, but is that standard college ruled paper? I am looking to get a specialty nib and I am having trouble with the size I want. Funny enough, I am thinking of a .8mm stub. Smack dab in between your .7 and .9.

Thanks for the review. Great handwriting!

thanks for showing us! the 600 is the perfect size i feel for me too.

Sorry for the stupid question, but is that standard college ruled paper? I am looking to get a specialty nib and I am having trouble with the size I want. Funny enough, I am thinking of a .8mm stub. Smack dab in between your .7 and .9.

The paper is a Rhodia A5-size lined pad.

very nice extra touch to writing, and on that note nice lettering style =)