21 replies to this topic

Here is my impression of my new Edison Pen Company Huron fountain pen. Materials are acrylic and the nib is steel. The pen feeds from bottles only by squeezing the attached rubber bulb. The grip section is an homage to classic Duofolds, and was my choice. The color and pattern choices were inspired by a visit to one of those fancy, hip toy stores that sell unusual figurines and other cool stuff.

Upon receipt of the package I tore into it essentially bypassing Brian's documents, writing sample, and the faux crocodile pen coffin. I just wanted to see the pen although I had already been teased by photos Brian had sent after completing the pen. These photos appear immediately below, with Brian's permission. 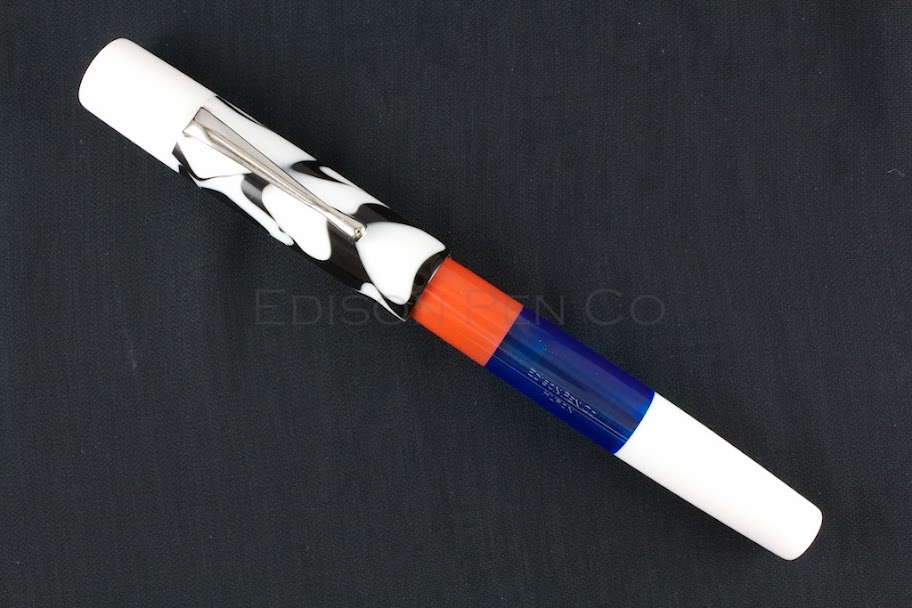 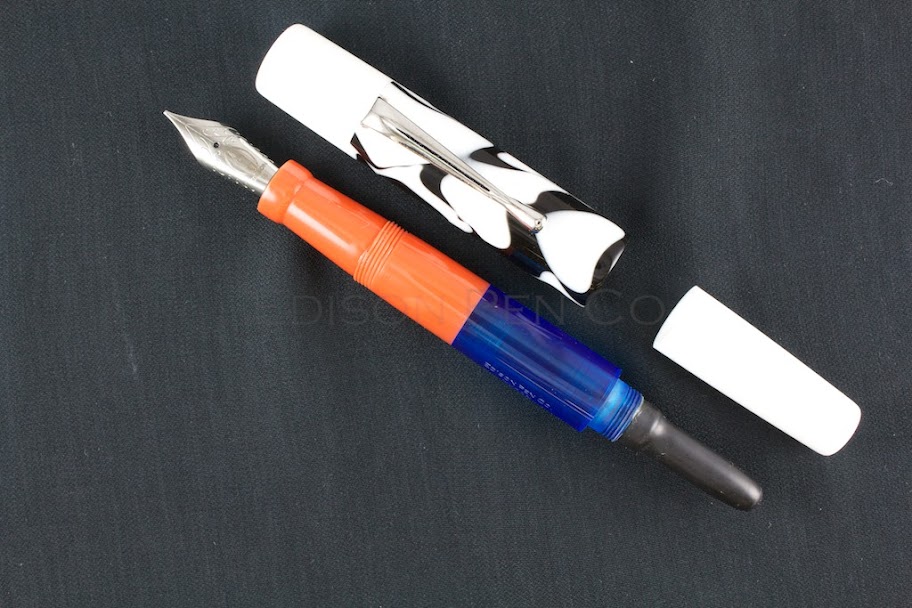 My first reaction was, 'wow, that is a long pen' and 'hummmm....I though the orange would be brighter'. Both these impressions are addressed in my photos below. The Huron is a big pen, but very lightweight. The orange is less bright than Brian's photos on a black background would suggest. It is more or less orange I guess, just not traffic cone orange. It actually appears more of a shade of brown known as sinopia, which makes it pretty similar to vintage orange ebonite and also a close match to my Chatterly Pens Bexley Imperial 1 in orange ebonite. All the rest of the photos are mine.

The pen is also surprisingly lightweight. I knew it was acrylic but the absence of a piston filling mechanism or other metal parts really removes a lot of weight. Filled with ink it only weighs 23 grams and that with a huge ink capacity. Speaking of the ink capacity I'm impressed with how well the bulb filling mechanism works. It takes maybe half a dozen squeezes but it is possible to entirely fill the barrel with ink, which is several milliters for sure, perhaps as many as four. The transparency of the blue ink chamber is seen best in Brian's photos above because, well, because there is no ink inside. Filled with ink, in this case Diamine Midnight, the pen looks more attractive because the blue section is darker making it a better match for the orange part. I am somewhat OCD when it comes to cleaning my pens and I like to change colors with every fill. Cleaning this pen thoroughly will probably require removing the nib, lots of water, and the use of a vacuum system. If I don't change colors, however, I could be much more relaxed about it and just refill whenever I felt like it. Diamine Midnight is a great ink.... Now, how about the nib?

I wanted the steel nib from the start, especially since Brian recently started offering the nib with the Edison light bulb engraving. Not only does a gold nib cost a lot more I really don't think it offers much in terms of performance and I would not have wanted a gold shade on this pen. A medium (0.9 mm) cursive italic was requested and that is what I got. Brian included a writing sample showing how the nib writes that reads "...good variation. Nib does have a little feedback, but overall smooth." I concur. Although I have three other Edison pens (one or two actually predate the Edison name; it was Pencraft back then) none were custom ground by Brian. Indeed, custom nib work is a relatively recent addition for him. His nib work is very good indeed and is worth the modest fee he charges, especially since the pen need not be shipped to a separate nib meister. How does it compare to a nib meisters work? Well, it turns out that I have several custom cursive italic nibs in house by several different nib specialists. The best were done at Pendemonium in Iowa (my home state), which is well known herein. A writing sample is below. Don't worry too much about color accuracy, although I did try, instead focus on the excellent line variations available. Compared to my Bexley's from Pendemonium Brian's steel nib is not as good in terms of feel or perfection of ink flow. Nevertheless, Brian should feel proud to be compared to Letta, who custom ground nibs for Sheaffer's and has much more experience, by at least 30 years, than he does. 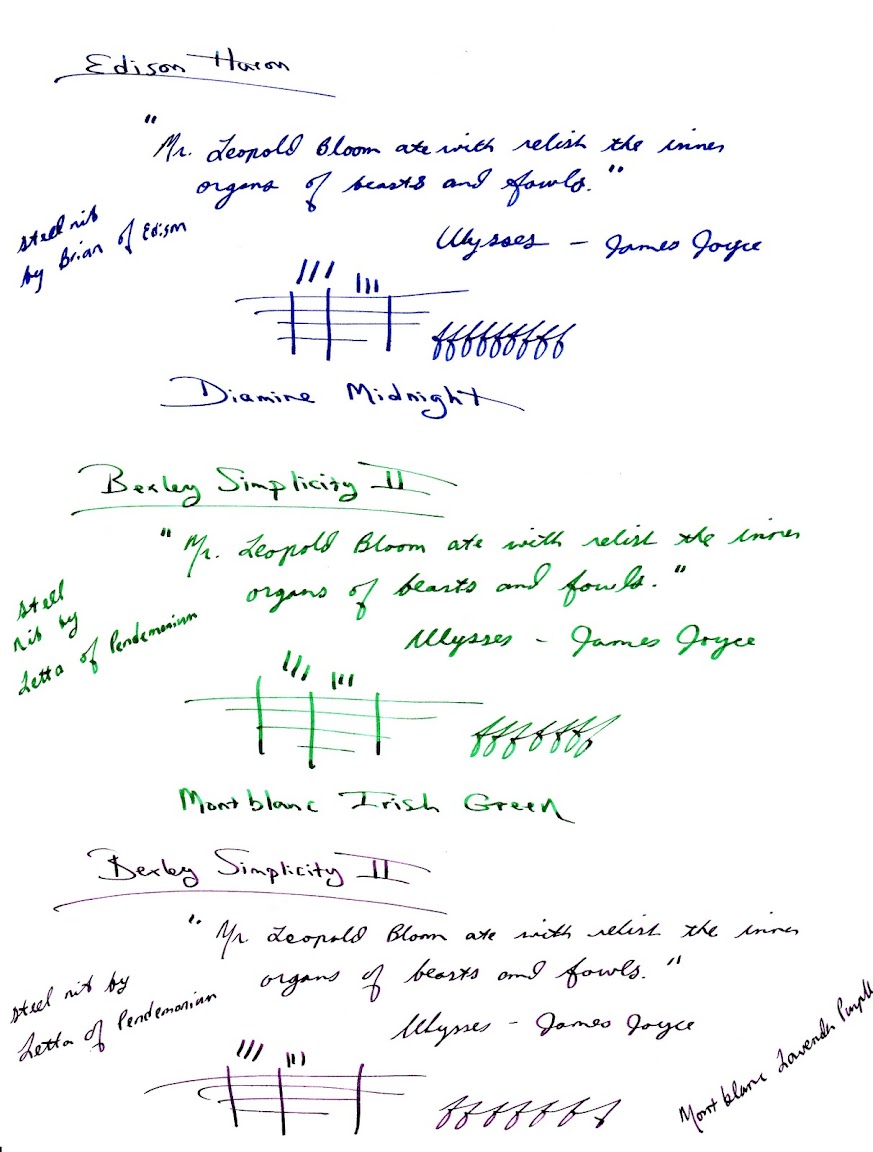 Regarding the size of pen it is definitely oversized. Photos below compare it to a Pelikan M800, which appears short in comparison. The Huron is very much lighter than the M800 and is better balanced in the hand, that is, as long as it is not posted. When posted it transforms from pen into cudgel and the giant cap really makes the whole unit visually unappetizing. Don't bother posting this pen. Since I almost never post anyway (who does?) this is no problem for me. The length, modestly large diameter, generous grip section, proportional nib size, and light weight combine for a supremely comfortable pen for actually writing. I could, and have used this pen all day long, and happily at that. It is no wonder to me that Edison was considered for Best Writing pen or whatever in Stylus recently. Visconti won that round but with a stable of stupid metal grip sections and that dreadful Dreamtouch palladium nib thing (it drives like a huge, old Cadillac with no road feel) I don't know why. Anyway, the Huron is a fantastic writer and better, I think, than the Edison Herald II. 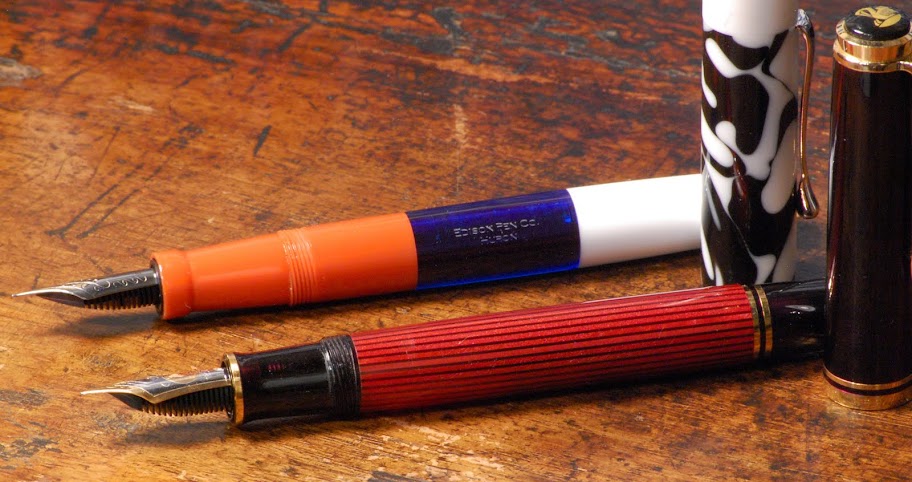 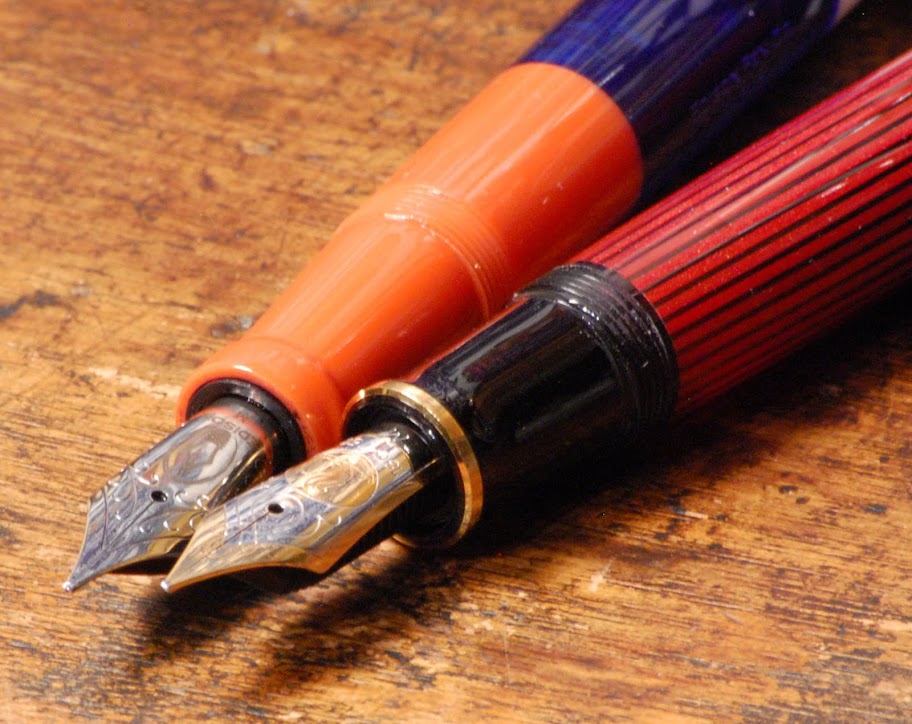 As has been said many times in these pages when you buy an Edison you don't just get a pen, you get Brian Gray too. This is a good thing. Included in the package was a hand written note, a personalized letter, instructions for filling the pen, silicone grease for the section threads, and an invoice that all accompany Brian's total devotion to customer service. You can even send the pen back for buffing whenever you want. If only the big companies cared this much. Including shipping I spent 400 bucks on this pen, which would also have gotten me a crappy old Cadillac, but in the world of high end custom pens this is a huge bargain. Bravo Brian!

Only with Edison pens could you possibly get something this awesomely outrageous! I bet it turns quite a few heads. My god. I'd love to see that in person. That is the wackiest design ever.

This just goes to show that beauty is definitely in the eye of the beholder...

Thanks for sharing your 'wacky pen design' with us.....I enjoyed reading about your new creation and your enthusiasm for it!

I love that cap, looks like some kind of zebra offshoot or psychedelic zebra art from the 70's.

This makes want one even more now and just after I swore off buying pens after my recent purchases, you guys are killing me

Love the white with black. Actually, the more I look at it ... the more I like the whole pen.

MB would never risk themselves with this. That's why we support the "little guy". Thanks

At least you'll never see anyone else whip out an identical pen at a meeting...

This just goes to show that beauty is definitely in the eye of the beholder...

We can all draw inspiration from this project - whatever the taste, it is possible.
We can all realise our vision of the ideal pen. Cheers to you and Edision.

Congratulations on the special and "wacky" pen, if it makes you happy and it's a great writer, then there's nothing wrong with that!

Congratulations on the special and "wacky" pen, if it makes you happy and it's a great writer, then there's nothing wrong with that!

'Cow from the Netherlands, indeed!'

The design is wacky, but it works for me. I have the same model in a sober grey-brown ebonite (but clip less, and with a gold nib), and absolutely love it!

I'm curious about the bulb filler. Can the pen be easily flushed?

Yes, the section unscrews from the Edison Bulb Fillers which means they can easily be cleaned.

I like that pen. Not very likely that you would ever have trouble indentifying the office co worker who "accidentally" picked up your pen. Enjoy it!

Thankful for being blessed with a genteel life and wonderful wife

Sounds great. Tempted to get a customized pen from edison...

what is the name of the black and white acrylic? i really like the look of it!

Please check out my blogshop for fountain pens and inks at http://inkoholicanonymous.blogspot.com/ Reviews of my pens can be found there too!

what is the name of the black and white acrylic? i really like the look of it!

Nice pen and a nice example of Brian's willingness to customize.