Montblanc 234½ With A Palladium Obb Nib

I had been interested in acquiring a Montblanc for some time but the chance had not come up until recently. I am not really interested in the modern production as I prefer vintage in general. I happened to spot a sorry looking pen in a blurry photo on ebay and thought that it was worth a punt if the price was reasonable. Well here it is after some TLC and it has turned out to be a very interesting purchase.

The MB 234½ is a classic design dating back to the 1930s. It is typically conservative in the German style being mostly black with gold trimmed metalwork and almost a flat top design. 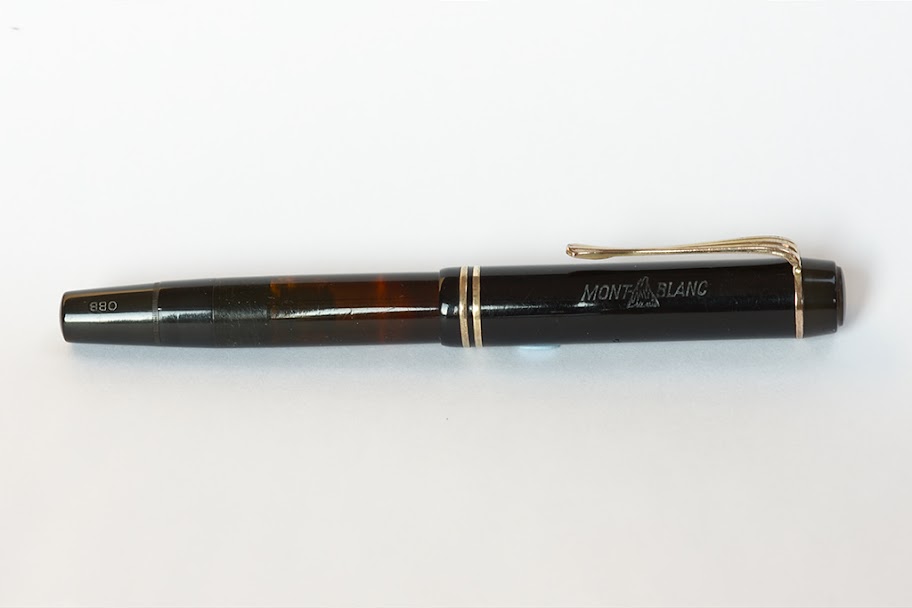 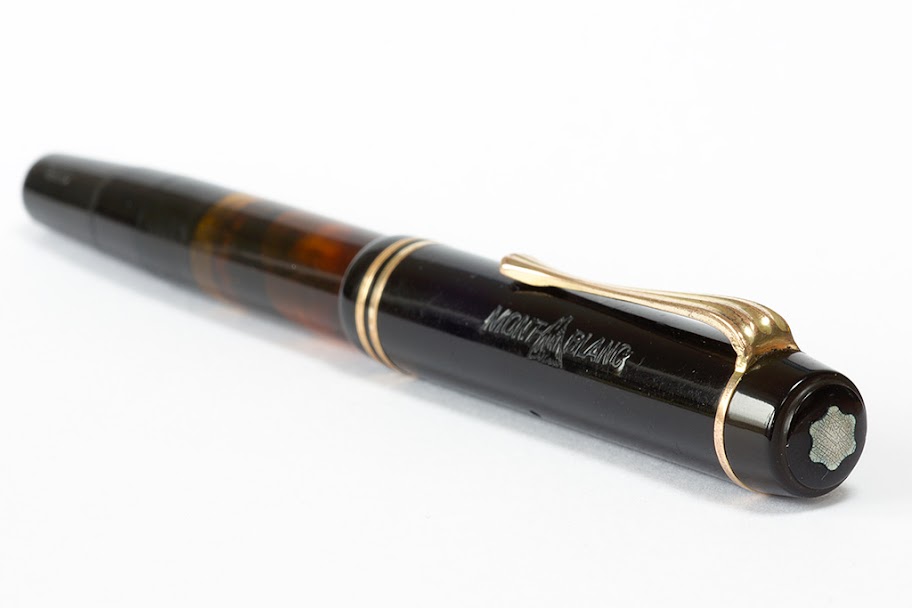 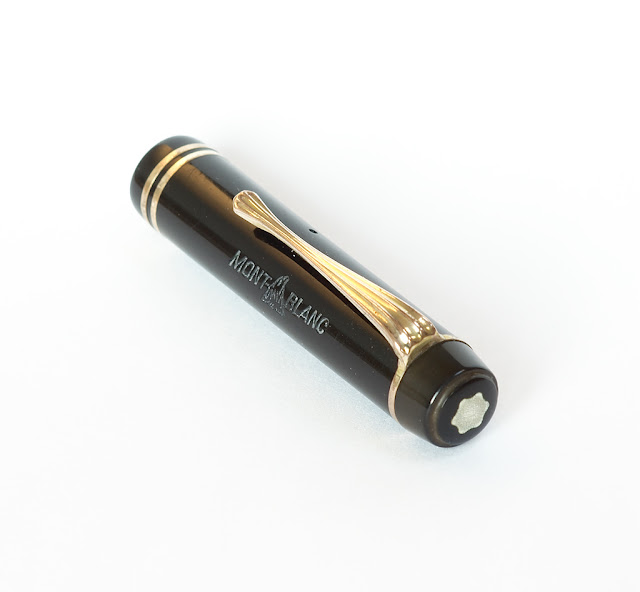 Construction is mostly celluloid with a bakelite (I think) filler knob and gold plated brass metalwork. The piston mechanism is steel, the nib palladium and the feed ebonite. The pen is well constructed and has a certain solidity about it. It has lasted well and the plating is in good condition. The models of this pen that I have seen mostly have a short ink window, the rest of the barrel being blacked out with paint inside the barrel. This black paint is prone to wear over time but this pen has full length barrel transparency, even behind the rearmost position of the cork piston seal (which causes the wear). I am not sure how this could happen or if it has always been this way. Would I fear dropping it? Yes I would, not just because of any potential damage but because getting a similar pen to replace it would be very difficult. 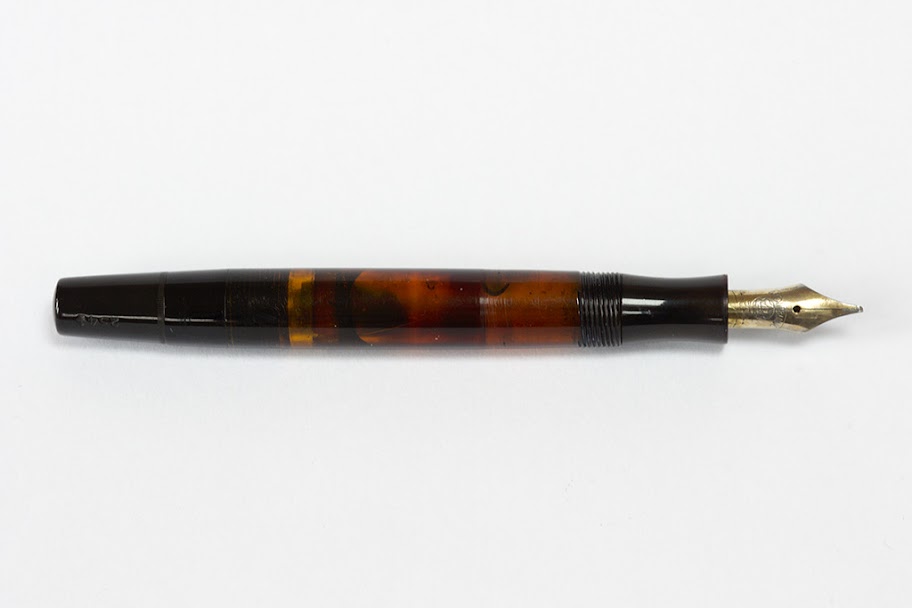 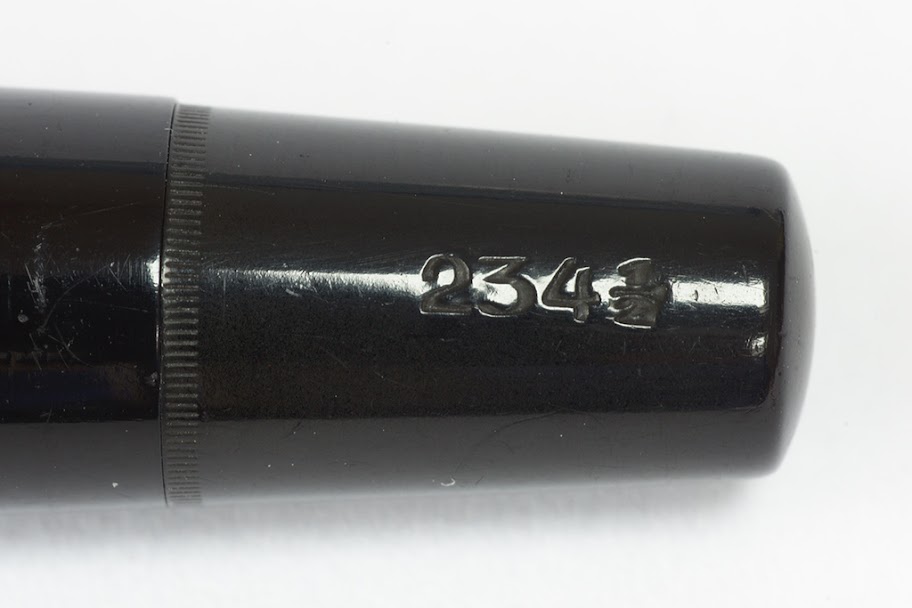 It is not a huge pen by today's standards at about 127mm capped and 148mm posted but it is comfortable to use and the section is not too thin. The full weight is 21g, so it doesn't feel flimsy in the hand. The pen is nicely balanced posted and this is the way that I have it when writing. 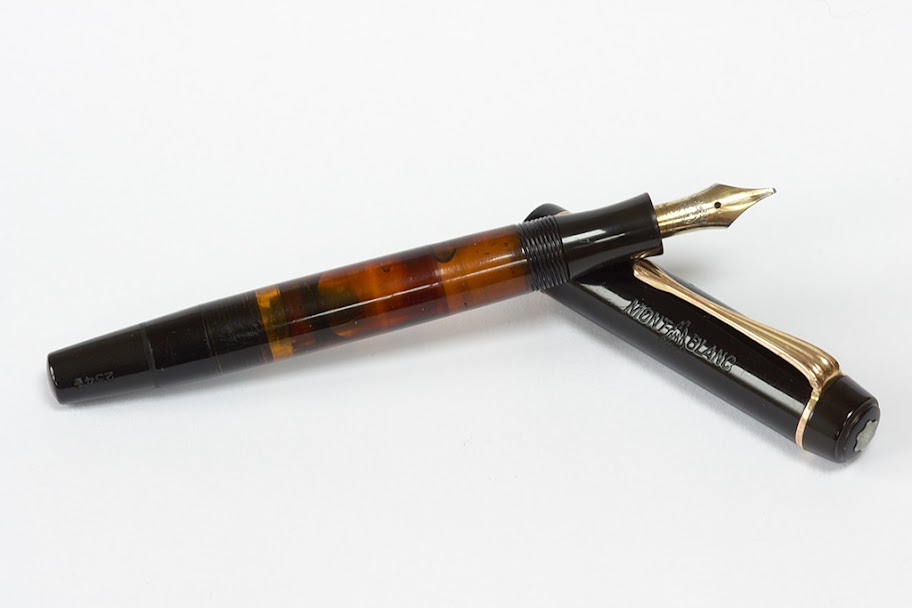 The nib of this pen is something special. It is a flexible palladium OBB nib and is quite amazing. I am not an expert but from the information that I can find, this nib and the general design dates the pen to around 1939 on the eve of the second world war. The nib is in generally good condition. Some of the gold plating has worn off the nib over the years but I am leaving it well alone as it would be easy to polish the remaining plating off. It writes well despite a slight bend in one of the tines and is very smooth as well as being capable of producing great line variation in the hands of an expert (not me). Why are there no modern nibs like this? 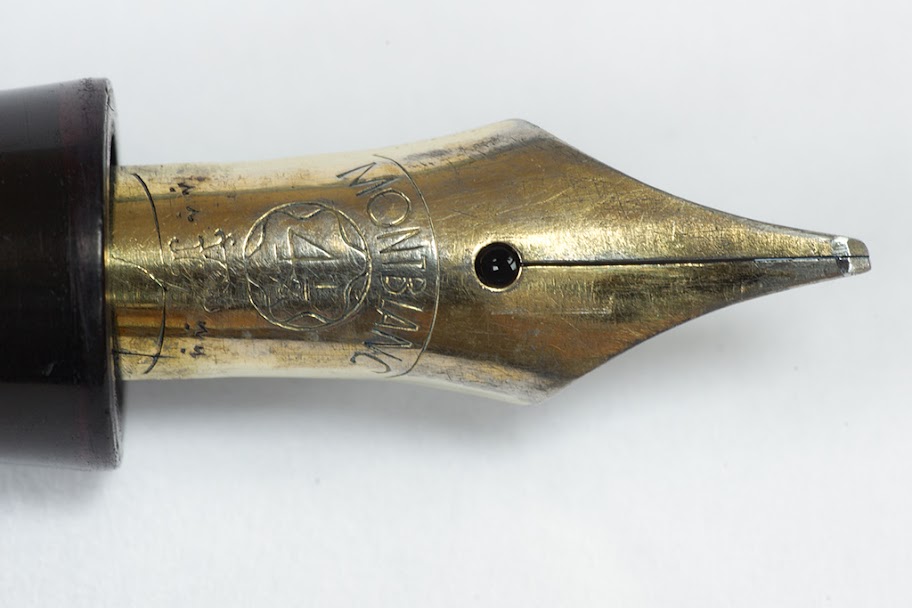 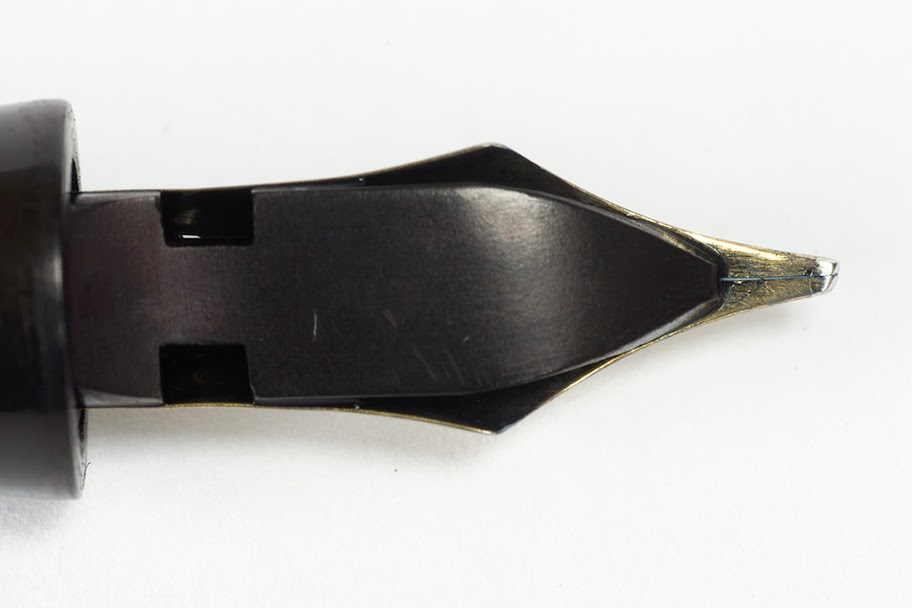 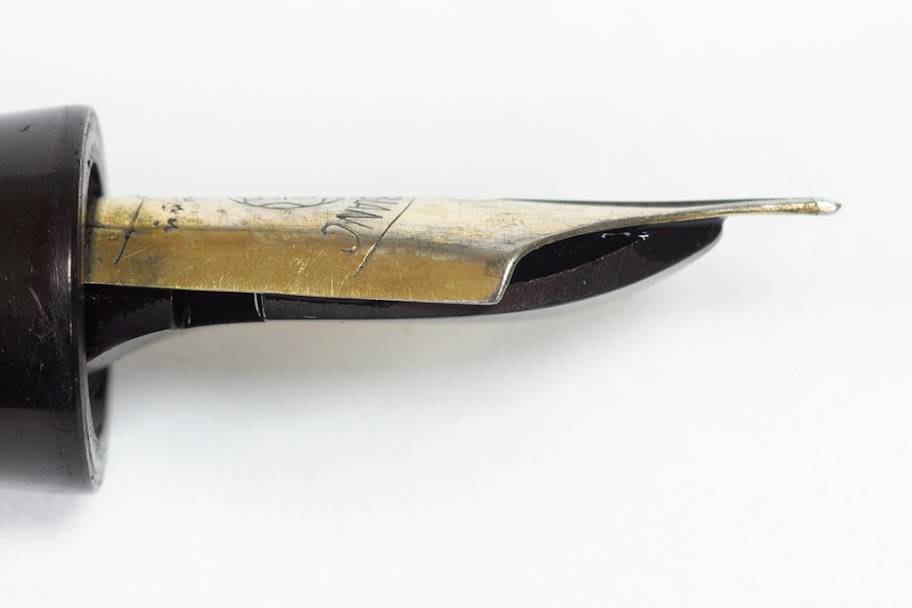 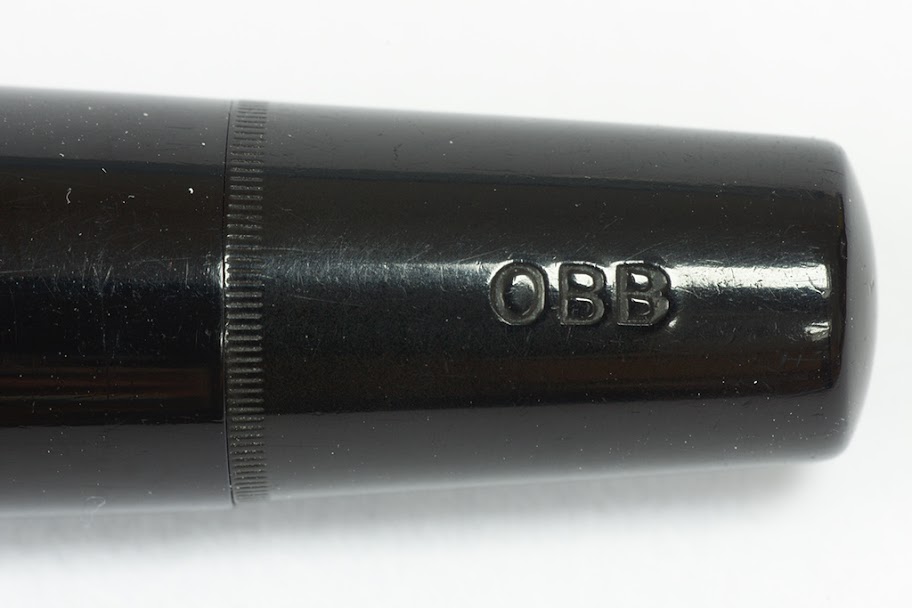 The MB 234½ is a piston filler and holds a huge amount of ink for a pen of this size (and most others). The piston mechanism is a fascinating telescopic design and is responsible for the large capacity. It is made from steel and brass as far as I can see. I guess that the reason that modern Montblancs use a less sophisticated piston mechanism is mostly down to cost. The filler mechanism uses a cork seal and this was almost totally rotted away. The cork seal has been replaced by Eric Wilson (FPN member Eckiethump) who also expertly repaired a hairline crack in the barrel threads near the section where it was causing leakage and filling problems. 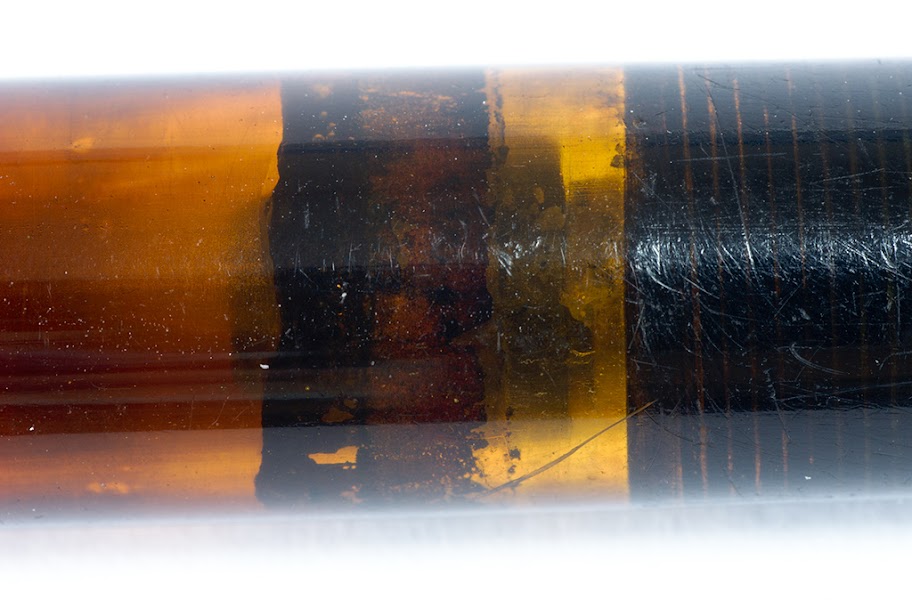 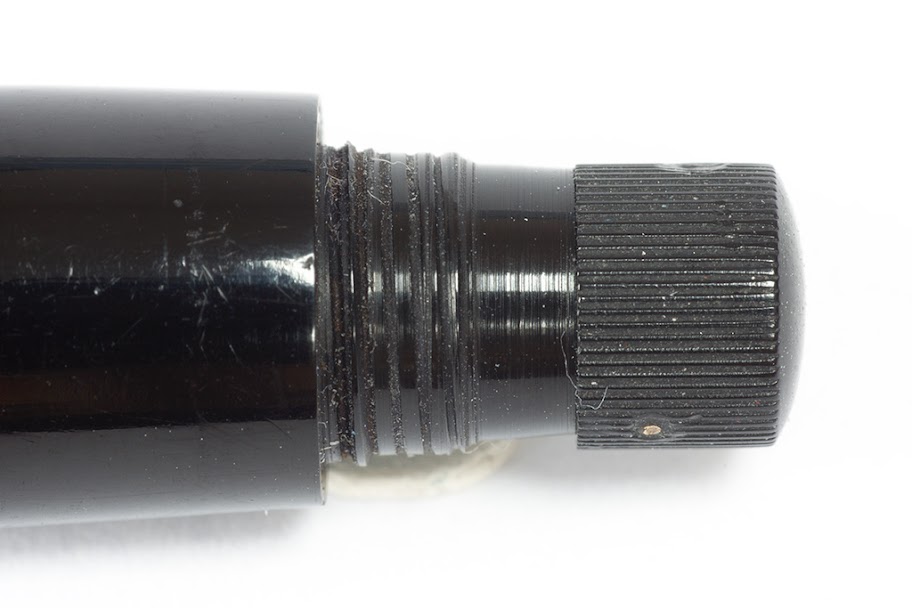 The pen cost £30 and I have to say that it is serious value. I would not like to say what the best price that it could sell for was but I think that it would be a lot more than £30. However, it is not going anywhere soon. I have had quite a good month buying MB's in general as I bought this pen, an OB nibbed 3-42G in good condition and an extremely good condition eighties broad nibbed 149 for a total of £225.

While many pens come and go from my ownership, this is one that is here to stay on a permanent basis. It's features, uncommonness (is that a word?) and possible history along with the brilliant nib mean that it is special to own. It will continue to make a regular appearance in my rotation.

Congratulations on a lovely acquisition-and a fabulous deal to boot. Enjoy!

Thats one smokin pen i love that nib i think i may have an obsession with Oblique nibs now.

My pen has the one wide gold cap ring instead of the 2 small rings.....

What else do we have in life if not to help each other?

Thanks for the comments, I am going to enjoy it for many years.

Very succinct and helpful review of an unusual pen. The writing sample was a great illustration of the possibilities with this nib. Thanks!

"The cultured man is the man whose interior consciousness is forever obstinately writing down, in the immaterial diary of his psyche's sense of life, every chance aspect of every new day that he is lucky enough to live to behold!" - John Cowper Powys

Your 234½ is very nice too. About fifteen years and a lot of history separates them. I like the clip on your pen it definitely is an up market addition. I had a modern 149 for a short period but didn't like it, none of the character of these old pens and the section was too thick to be comfortable.

My pen photo galleries - Reorganised
Back to Fountain Pen Reviews