The introduction of the Parker 51 in the Early 1940's brought a pen to the market that appeared so far ahead of the crowd that it must have had the other pen manufacturers rushing for their drawing boards.

This review compares the iconic Parker 51 with one of those rivals, the Waterman Taperite Statleigh. 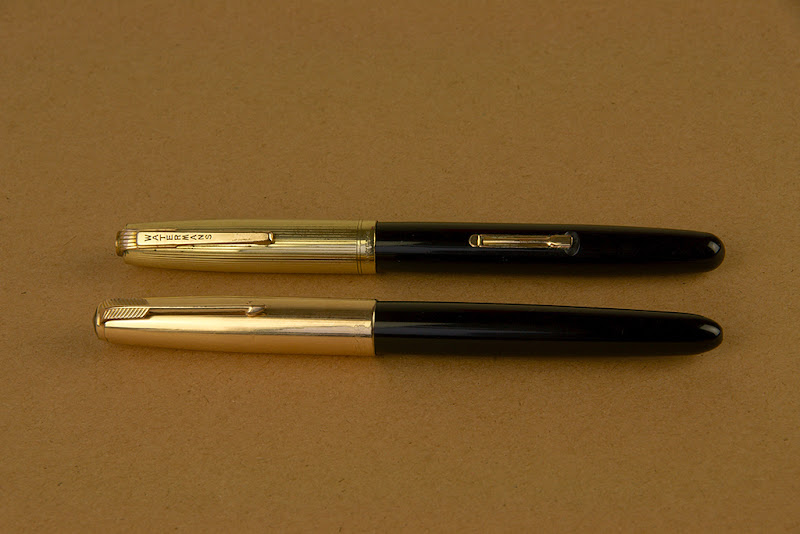 As can be seen, both the pens are similar in size and capped, they even look similar from a distance or closer to the untrained eye. The biggest give away that they are not the same is the lever mechanism in the Taperite. I think that from looks alone capped, it's even stevens. I like the art-deco cap fitted to the Taperite, though can't help but think that this was a bit dated by the early 1950's. However Waterman was known for it's conservatism. 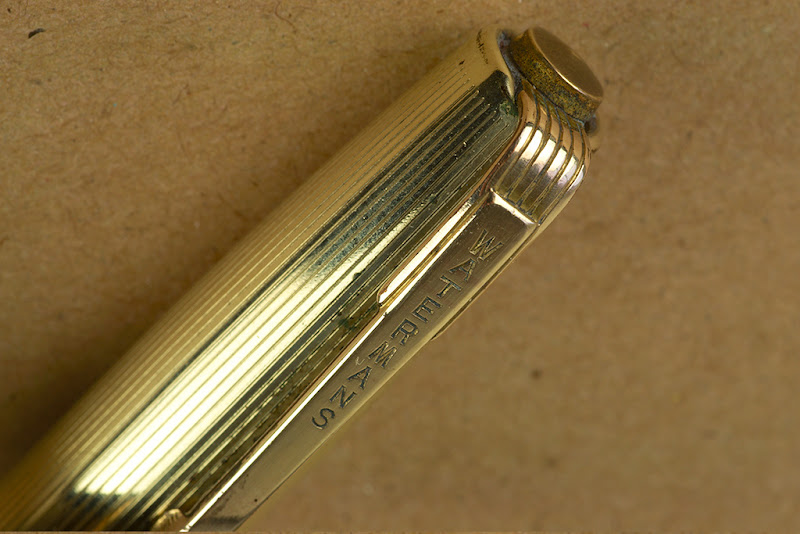 Open the pens up and the difference is more obvious. The P51 has a much more streamlined section hood, due to the fitment of a completely covered nib unit. The Taperite nib is not fully covered, so has a more truncated appearance very similar to the early Aurora 88 (another pen on my wish list). Both pens use a similar clutch mechanism, though I have heard from anecdotal comments that the P51 mechanism is more robust. In fact the P51 feels a bit more solid than the Taperite, though both have lasted sixty years and are in good health, so the Taperite must be well built. 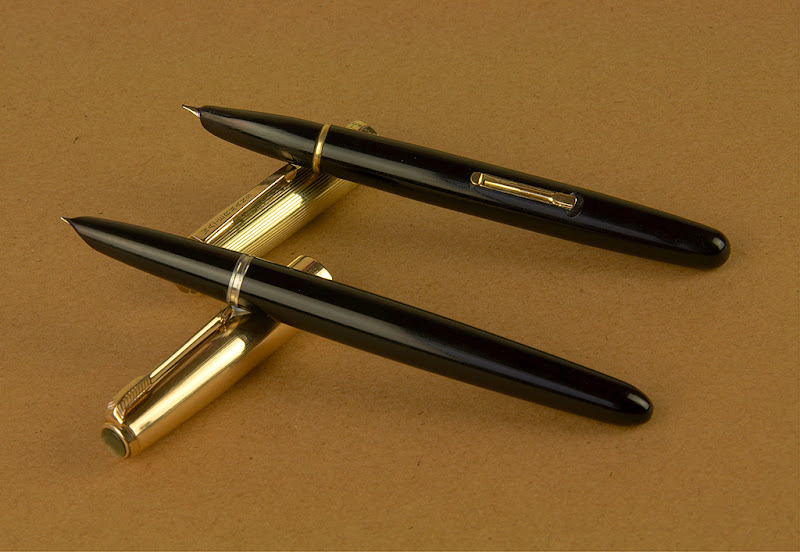 Internally the pens are very different. The Waterman uses the decades old lever filler mechanism and the P51 uses the squeeze aerometric filler system. Both are simple, reliable and work well. The Taperite incorporates an ink sac, the perishing of which has led to the untimely end of many examples of this pen simply because Waterman knurled and glued the barrel to the section making them difficult to open without damage. The fact that many P51 pens still use the original aerometric sac points to the superiority of the materials used. I alluded to the conservative nature of Waterman earlier, the lever mechanism being an example of this. Another example of conservatism is the semi hooded nib. This is simply old nib technology hooded as much as possible rather than the all new tubular nib design used in the P51. The retention of conventional nib technology did mean that Waterman could equip their Taperite nibs with a good degree of flexibility and the nibs found in Taperites range from stiff to quite flexible. 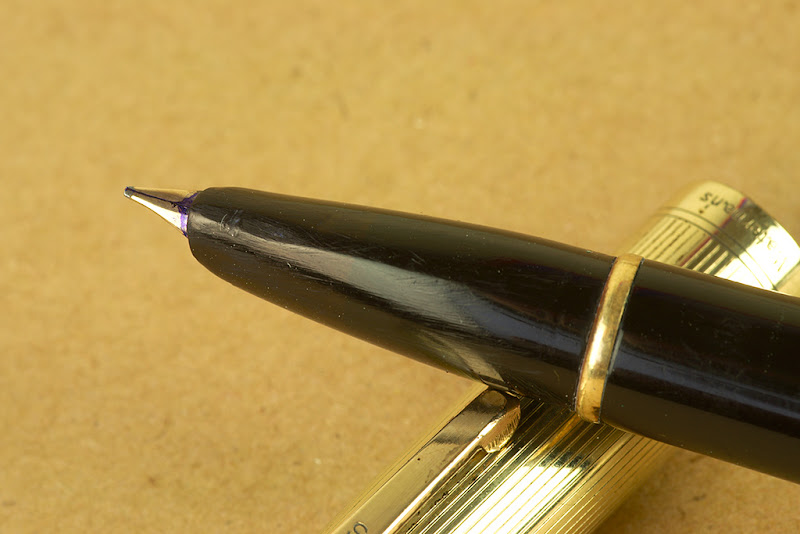 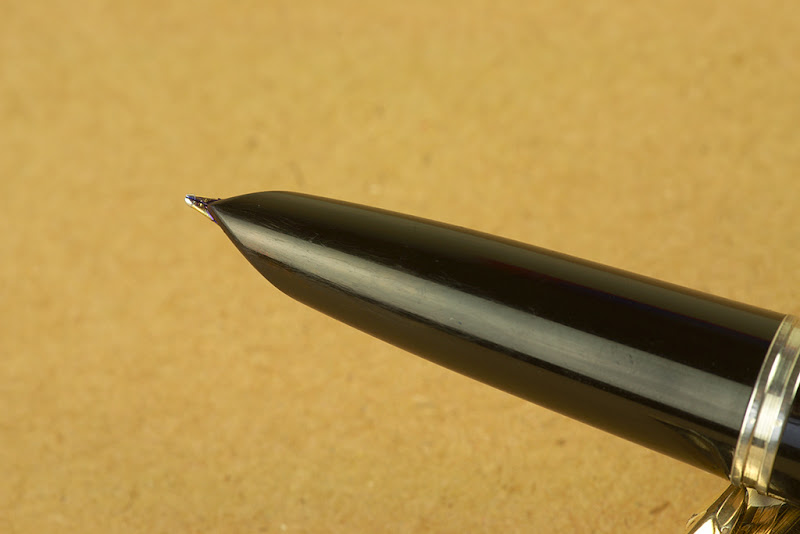 In conclusion, my thoughts on ownership of these fine pens. Much as I like the P51, I can't warm to it (and I have three!). I find it good looking, robust, reliable and smooth writing but just a bit characterless. The Taperites on the other hand overflow with character. My taperites are a joy to look at and to write with. The P51 writes with a line with zero variation, both my Taperites (the other is a Citation) have a good degree of line variation but for different reasons, the Stateleigh has a firm stub or CI type nib and the Citation a flexible medium nib. Both are very smooth writers, as smooth as the P51.

For me, the Taperite wins this fight but I can understand why it does not hold the same popularity and esteem as the P51. The older technology and the not unfounded reputation which means that buying an unrestored Taperite is a gamble that could mean consigning the pen to the spares bin when servicing is attempted. Get a working example and it is a joy to use, not to mention good value.

Fascinating review, and two beautiful examples of the pens in question. And by the way, from what you say about the Waterman's, I think you would love an Aurora 88 with a flex nib.
ron

I think you would love an Aurora 88 with a flex nib.
ron

Gonna look for a Taperite now.....

MY-stair-shtook eyn-HOON-dairt noyn und FEART-seeg (Meisterstuck #149)
"the last pen I bought is the next to the last pen I will ever buy.."---jar
WTB: Sheaffer OS Balance with FLEX nibs

And then the mysteries began

When I first started your review, I said, "It's going to come down to the nib." I think you did an excellent job comparing these two pens, and solidly hit on the Taperite's greatest strength: Waterman put great, expressive nibs on all their pens.

For myself, I love both models equally, and use both. I have a gray-barreled model Taperite of the same type you reviewed here, which came to me with an impacted nib. I was told it couldn't be repaired because of the nature of the plastic used in the section, etc. But, it was such a beautiful pen that I spent days working with it till I got the nib and feed out, and reset them. It's been one of my constant companion pens ever since.

"Here was a man who had said, with his wan smile, that once he realized that he would never be a protagonist, he decided to become, instead, an intelligent spectator, for there was no point in writing without serious motivation." - Casaubon referring to Belbo, Foucault's Pendulum.

Thanks for the feedback. I just went and looked at the Aurora 88 again on the net and will be actively looking for one.

The thing about flexy nibs and the Taperite is that they don't all have one, but even the stiff nibs seem to give good line variation. I am looking for a Corinth and perhaps a Lady Garland (possibly too small) to round out the basic set. There are other variants such as the Crusader and the Medalist too.

Looking at my Taperites, one way to tell if the nib is stiff or flexy is the length that it protrudes from the nib. The stiff nib protrudes about 4mm and the flexy nib about 8mm from the hood.

hello. got my second Taperite today. can't say that i like them more than my beloved P51, but i'm very happy with it!!

hello. got my second Taperite today. can't say that i like them more than my beloved P51, but i'm very happy with it!!

Spookily, I put this Taperite into my rotation today. I had forgotten how well it writes.

Taperite pens are among some of my favourites. Really love the way they write. I actually prefer them to my Parker 51s, and almost as much as my beloved Parker Vacumatics and Sheaffer PFMs.

Writing with pen and ink, is an endeavour both stimulating and cathartic.
Back to Fountain Pen Reviews