First time posting a review. This is a repost of a review which i did on my blog. Posting it here for those who are curious about the reaction to this pen.

The pen is pretty small, about the size of the Merlina or Merlin 33 that Richard Binder used to sell. The body is lightweight and the resin is a murky-ish clear. It looks and feels kinda cheap, but that is okay, because it has a nib that i really like. The nib i got is pretty flexible. Not quite as wide a flex as a Waterman 52 or as soft as my Merlina/Merlin 33s but certainly comparable to my Mitaka and even some of my Mabie Todd Swans. 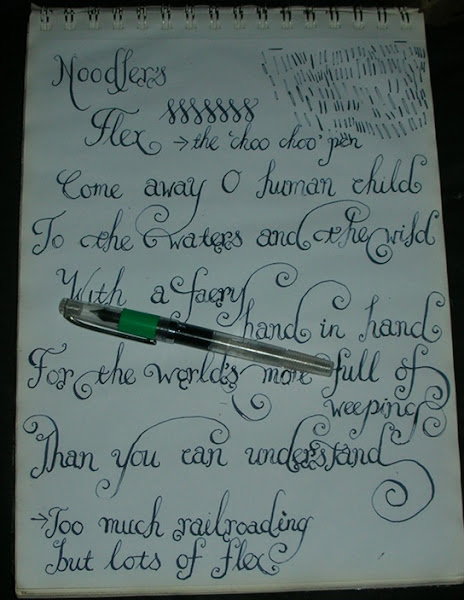 The pen did initially suffer from some railroading at the start, but that soon went away with frequent use. The jury is still out on the railroading though, it might be a persistent problem, it might not. I have not had the pen long enough to tell. What i can say though is that i love this nib, despite the problems with the feed and for $14 bucks a pop, I might get more of this model and transplant the nibs to other pens with better feeds. I am amazed at how the nib sings though, given the price and that it is a steel nib. 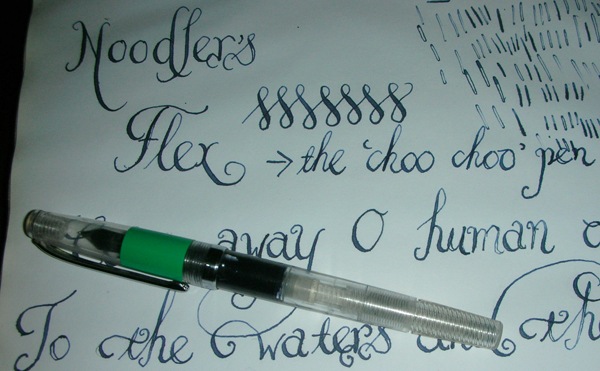 The green band on the cap is some green plumbers tape that I stuck on over the vent hole to hopefully prevent the nib drying out . Choo Choo Pen refers to the frustration i felt at the initial frequent railroading, before it mysteriously resolved itself. Perhaps i did not flush the pen thoroughly enough before use. I only used dishwashing liquid and some water to flush it and still had railroading, though that problem is less marked now.

The no-frills aesthetic of the pen. Not much to look at, but boy does that nib sing. Pen is a piston fill but it does not hold all that much ink and the pen is a bit of a wet writer. It probably doesnt help ink conservation that I took out the feed and enlarged the channel with a X-Acto knife. haha. Removing the nib and feed is very easy. Just get a firm grip and pull. I used section pliers to help with the grip and tugged the nib/feed out with no problems. 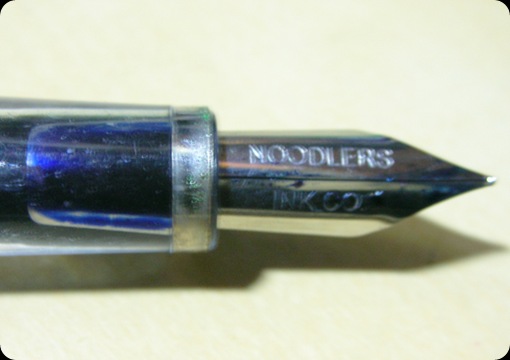 The nib engraved with the words Noodlers Ink Co. You can see that the slit goes all the way to the body of the pen. I have never seen a slit that runs this far back down the body of the nib, but hey, if it works, it works. As mentioned above, I am pretty glad that Noodlers are bringing back steel flex nibs. Its been a good long while since these have been around. Previous examples that come to mind are the Esterbrook 9128 and 9048 nibs and Japanese Shiro nibs, such as on my Mitaka. It does go to show that you dont need gold for flex. 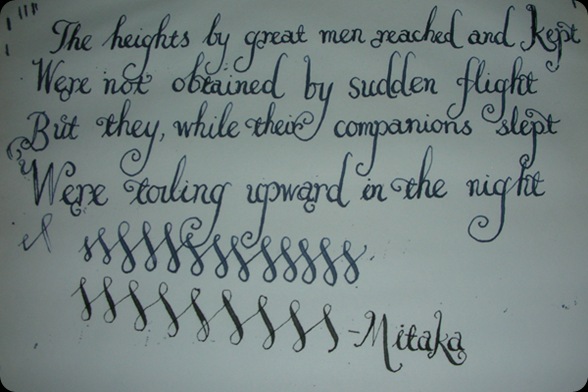 Writing sample above. You can see that the flex of the Noodlers is comparable to the Mitaka, though the Mitaka has thinner hairlines since i had it sent to Greg Minuskin. I really like the nib on the Noodlers and how it lets me whale on it rather carelessly without too much worry of springing the tines.

Preliminary opinion is that the Noodlers Flex pen seems a little like a work-in-progress, but theyre off to a good start with a brilliant nib and a reasonable price. I fully intend to get a couple more when the shops are restocked. They appear to all be sold out now, and with good reason. This is a fun pen that i enjoyed writing with and would make a good introduction to flex for those curious to see what the big whoop about flex is. Of course, the writing would be much nicer if i bothered to write in the Copperplate or Spencerian style, but i save that sort of disciplined approach for the dip pens and writing with this pen was really all about having fun and playing with it. At $14/- bucks a pop, its a damned good buy and a lot of fun.

I am in love with my pen. I have used nothing else for the past month.

why is your blind cap/filler knob open in every pic?

what does "railroading" mean in this context?

When you make a mark with the pen and the tines open up - instead of a broad line you get two parallel fine lines with a space in the middle.

why is your blind cap/filler knob open in every pic?

I'm not the poster, but I do this with the Noodler's pens to keep it from "burping" if you reduce the air bubble as you use the ink its less likely to happen. That's why I do it, but I can't speak for bengkia.

Nice review. I've had similar results in regards to railroading. However, it's only apparent under heavy flexing. Perhaps, I will consider a more runny ink to resolve the problem. Other than that, my Noodler's Flex Demonstrator's been working itself in to my daily writing rotations.

I am also on eBay

watch_art: physicsgirl(hi!:-)) is correct. That is indeed why i keep it open. I am trying to minimise the amount of air inside the chamber and it seems to help the flow of ink when flexing..

kcunvong: I too am experimenting with inks, though i don't have too many to choose from as yet. The ink in this review was a Pelikan Blue-Black. What's odd is that sometimes the ink will flow nicely at full-flex, so i have some doubts as to whether the issue is the ink. That said, the problem of railroading is less marked now.

michaelembley: bitterwonder's explanation is correct. Instead of getting a thick line when the tines flex and separate, you get two parallel lines.

What i can say though is that i love this nib, despite the problems with the feed and for $14 bucks a pop, I might get more of this model and transplant the nibs to other pens with better feeds.

My Creaper was hard to start, and even after I used a pen knife (the real McCoy, used for making quill pens) to enlarge and extend the ink channel, it still didn't work too well. Last night, I pulled apart one of my unused Esterbrook nib units and put this one in. Now it starts without delay and is plenty wet - too wet. I need a blotter.

I love the Noodler's Konrad, but the Creaper comes second place. I've never seen one with the green on it like yours.

I love the Noodler's Konrad, but the Creaper comes second place. I've never seen one with the green on it like yours.

OP said that the green on his pen is plumber's tape,

"The green band on the cap is some green plumbers tape that I stuck on over the vent hole to hopefully prevent the nib drying out."