I decided to get a Taperite after reading an article about them. They had not entered my radar before and looked like an interesting pen. I duly picked up the Taperite Citation model seen below for the grand sum of £3.50, so if my choice was horribly wrong, It wouldn't be a disaster. 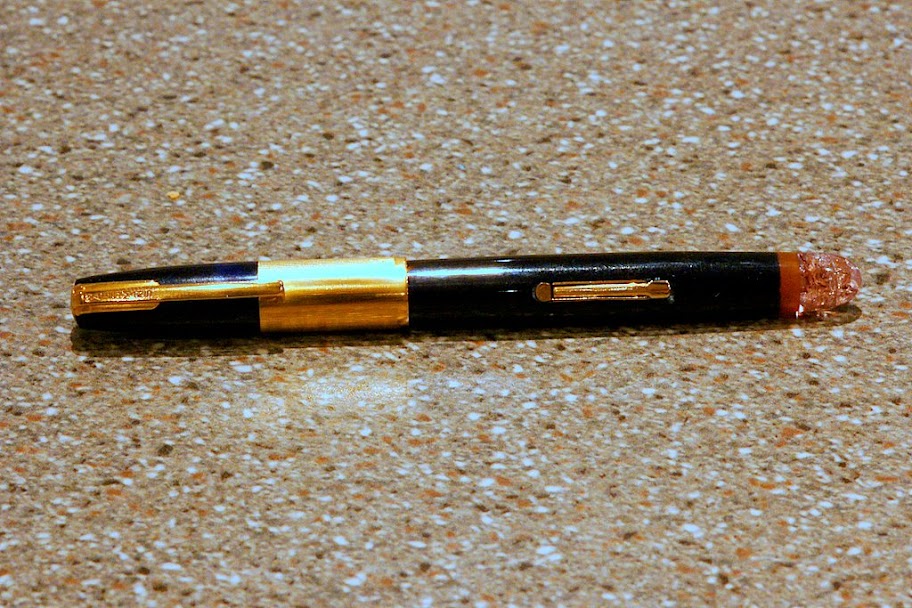 This pen has an engraving on the band showing that it was:

The paperwork shows his full name as Leslie Richard Charles Smith. The only reference I can find to someone with this name and era is Leslie Charles Smith, the founder of the company that made Dinky toy cars. Who knows......

It's nice to have something with a bit of history

Appearance and design 8/10
To me, the Taperite is delightfully different. The small semi hooded nib, the very deep blue with gold trimmings and the clear gum drop at the end. It certainly makes a change from the more conventional designs like the Esterbrook (nice though they are). 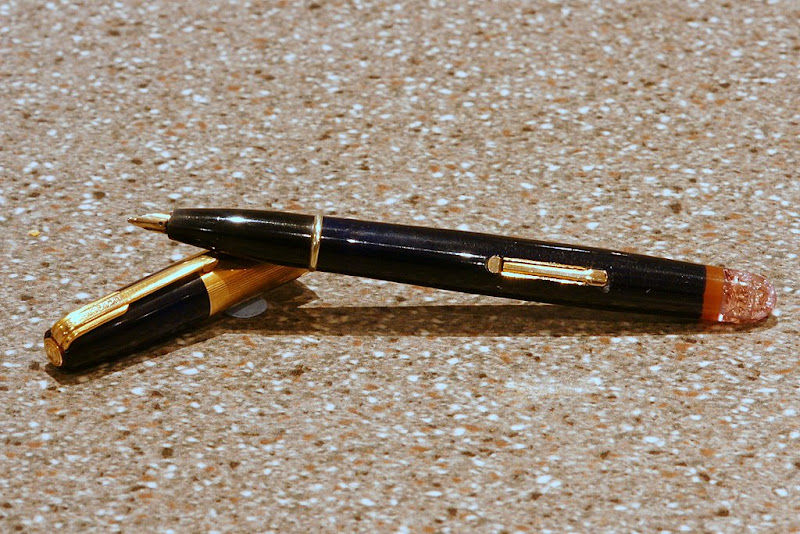 Construction and quality 6/10
Perhaps I'm being a bit harsh, after all it has lasted over 62 years but construction and quality certainly is not in quite the same league as it's hooded rival the P51. The surfaces are nice and glossy (the lighting shows up the micro scratches) and the metal trim has kept it's plating intact but, this pen like many Waterman's of the era especially the One Hundred Year pen, this Taperite suffers from partial disintegration of the plastics. The gum drop is heavily crazed, though it is intact and seems to be stable. This feature was removed from later pens. The plastics don't feel as solid as the P51, though there is no other cracking. 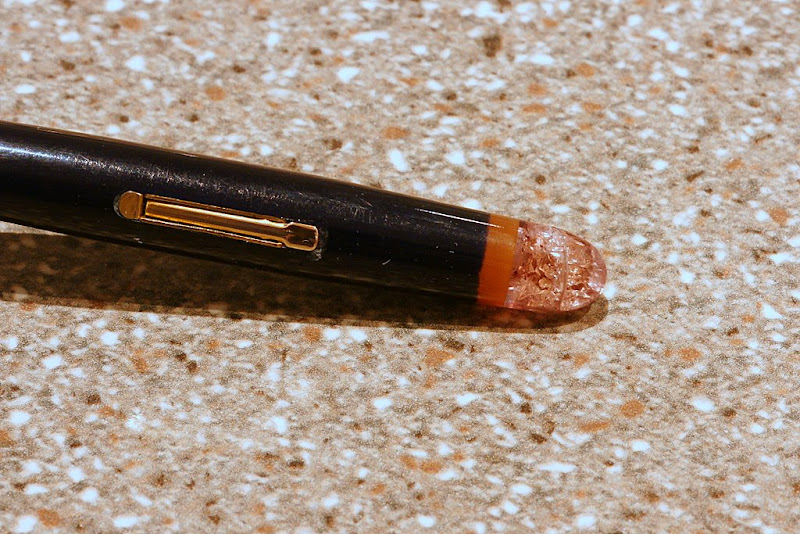 
Nib and performance 8/10
The nib was dry and scratchy when it arrived and was a disappointment after positive comments that I had read. Inspection revealed minor alignment issues which after some fettling have left a nib that lays down a smooth wet medium line with some variation. It looks like an OM in profile and this nib is probably the one listed as S.S.O in the documentation. The nib is also quite flexible, though I am not a great flex writer. Has anyone used Waterman's Waterproof Polar White ink referred to in the documentation?

Filling system and maintenance 5/10
This is a tale of two halves, one good, the other bad - hence 5/10. The filling system is the ever reliable and easy to use lever system and a quick wipe is all that is needed afterwards. Amazingly (and a very good thing), the ink sac still works and seems to suck up a good quantity of ink. On the other hand, tales of disassembling the Taperite are usually tales of major difficulty and not always success. I had a go at removing the barrel but it would not budge. I will wait until the ink sac goes and sent it off to an expert, such is this pens reputation.

Conclusion Final score 46/60
After initial disappointment with the nib, I really like this pen for it's looks, features and the way that it writes. At the prices that they go for the Taperite is seriously good value. However, the dark side to this pen is the potential trouble when it needs resaccing or other maintenance. The next step is to use it in anger and see how it performs.

Here is a writing sample from the Taperite in Quink washable blue and YPO lined paper.

thx for this review. i like my taperite. it's not as fancy as the citation you got, but the performance is very good.

tho the iridium of my nib is almost gone, it writes quite smoothly. just as you described, it lays down a nice medium line with some variation.

thx again for the review and nice writing too!!

here's pic of mine:

I may go for a metal capped one like yours if I see it, they are so cheap.

Thank you for the thorough review - especially the paperwork and writing sample. I enjoyed it!

Cool - I've got a Taperite Citation myself, with a really, really, REALLY fine XF nib, but mine doesn't have the Hundred-Year-esque "gumdrop". It's currently out of commission because I need to reattach its sac, though. Someone resacced it without trimming the sac to fit properly and it was all twisted up inside the pen.

Thank you for the thorough review - especially the paperwork and writing sample. I enjoyed it!

Thanks for your thoughts.

Cool - I've got a Taperite Citation myself, with a really, really, REALLY fine XF nib, but mine doesn't have the Hundred-Year-esque "gumdrop". It's currently out of commission because I need to reattach its sac, though. Someone resacced it without trimming the sac to fit properly and it was all twisted up inside the pen.

I will be happy if the barrel can be removed without damage when the time comes as I could not budge it with normal pressure. Looking at the paperwork, they list an accountants nib, I wonder if this is what you have?

I also noticed a music nib listed, probably a rarity.

now, that the re-sac was metioned... i was able to take my section appart from the body w/o any problems, but it took a lot of heating. I used a small traveling blowdryer and it worked... maybe after 100 attempts!!!

I will be happy if the barrel can be removed without damage when the time comes as I could not budge it with normal pressure. Looking at the paperwork, they list an accountants nib, I wonder if this is what you have?

Yeah, I wouldn't be surprised at all if mine's the accountant nib. It's really, really fine.

The section on mine is actually pretty loose - shrinkage, probably. I may actually cement it in when I replace the sac since that should make it hold tight but still be relatively easy to get off again if necessary.

The strange thing is, not one photo of a taperite other than my own has the gum drop end.

I have scoured the net and all the images that I can find seem to have body (self) coloured ends. Surely there must be some more gum drops out there, I would like to see one in good condition.

Found one in the evil auction site (Crusader) and I have to say this pen has surprisd me.

I loaded it with waterman purple ink, and began using it.

The pen itself is a lot lighter than I thought, with the cap posted it regains balance and is a good pen to use.

The cap is light and the spring seems to be weak an doesnt click when closed.  It makes me nervous to put in my shirt pocket

I still need time to understand it, and get used to it.  I expected it to be a fine nib, and yes its smooth and lays a fine line however the width was changing and took me a while to understand what a semi-flex nib is.

All in all a fine writer, and probably one of the few good buys left as prices of fountain pens have gone up tremenendously in the last year or so