Writing Is Thinking In Ink 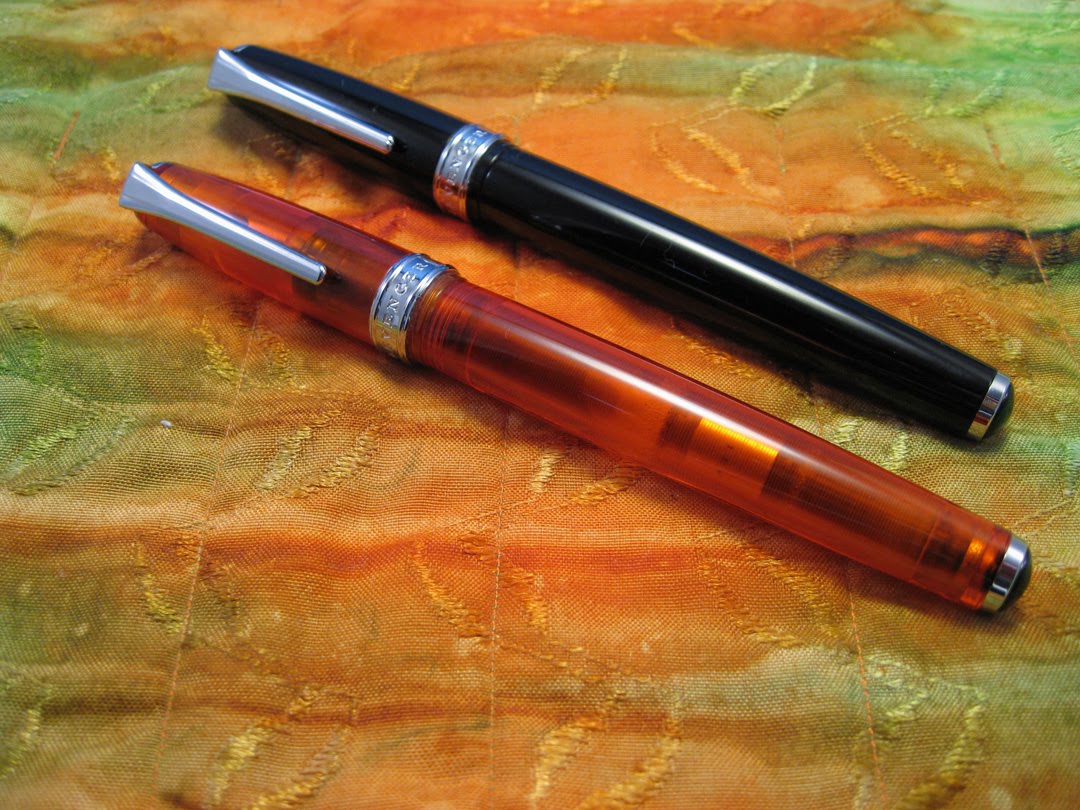 You don't have to be a fan of fountain pens to know who Levenger is. They are a large presence in the high end office accessory, desk stuff, pen stuff, leather accessories world and should need no introduction. But if you are in the minority of people who have never heard of them here is a small introduction.

Levenger was founded by Steve and Lori Leveen (by the way you can follow Steve on Twitter) because they were unable to properly light the livingroom in their first home so they could both read. They set out to correct that for all of us and started Levenger Design Company with the motto "Serious Lighting for Serious Readers" in 1987.

Since that time, Levenger has expanded to include the design center and headquarters in Delray Beach, Florida; stores in Boston, Chicago, Boca Raton and the DC area and Levenger.com in addition to the traditional catalog. They also have an eBay presence at the Levenger Outlet.

Please read more about this company on their website here: Who is Levenger and Company History. 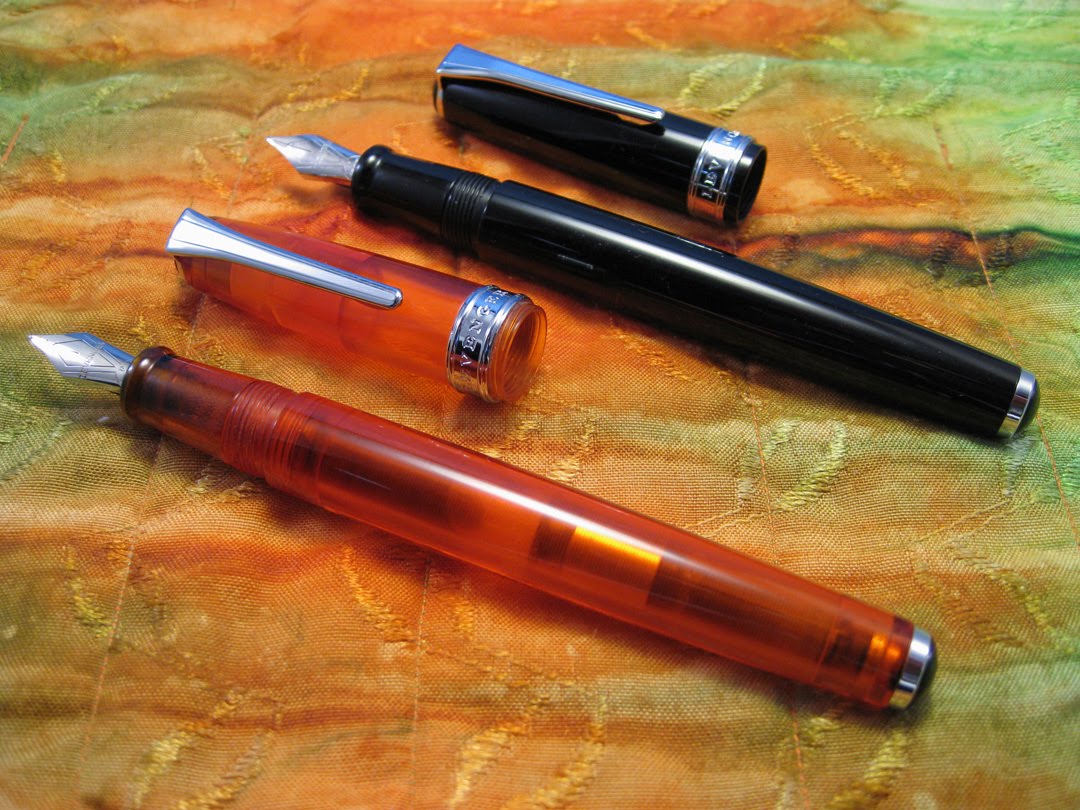 These pens are both Levenger branded Truewriters. The top is the Obsidian pen with a stub nib and the bottom is a demonstrator in Fireball.

The demonstrator is a pen that I acquired from the Outlet when they were being discontinued. I also acquired a bottle of the Fireball fountain pen ink with it. This is a great color and was part of a pack of fountain pen colors that Levenger dubbed "Slightly Wild". It is unfortunate that they were discontinued.

The Obsidian pen was acquired with a F nib, which I subsequently traded to an FPN member for her stub. At that time, the only way to acquire the Levenger stub was either in a pen or as part of a set. This nib is now available to purchase individually.

Which brings me to another great feature of the Truewriter, like the Pelikan and the Esterbrook, the nibs on these pens screw out for easy swapping. You can own one and purchase other sizes to expand your writing options. 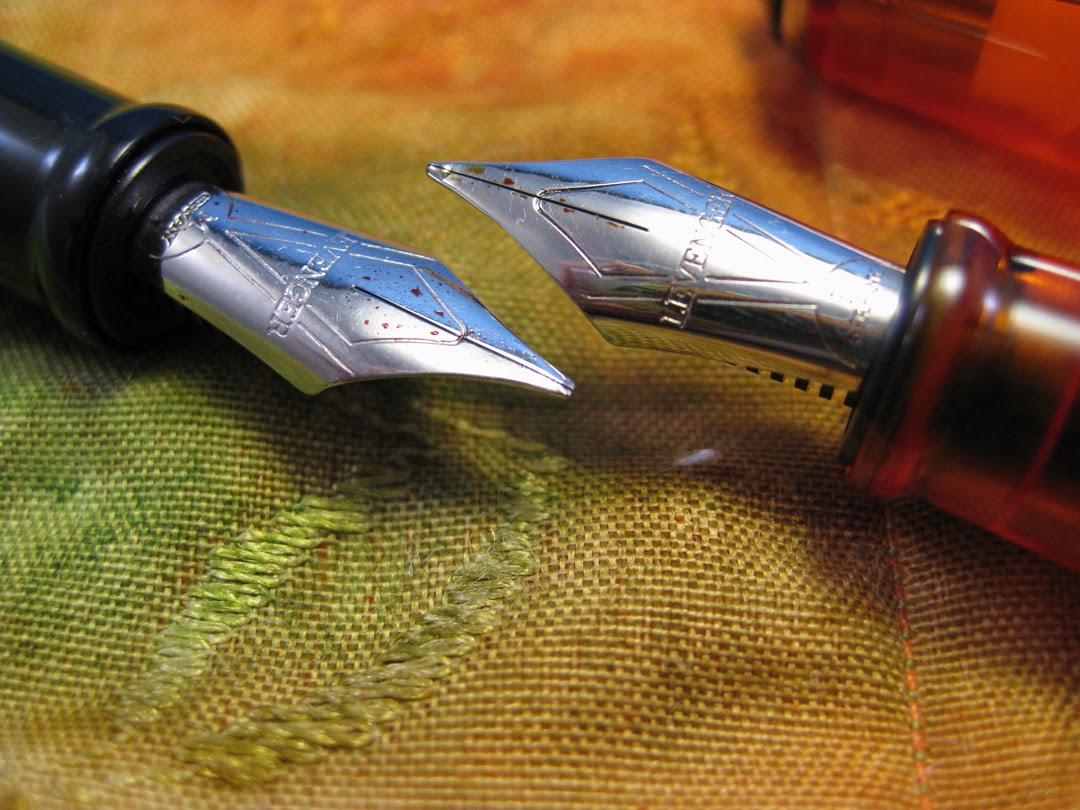 The stub nib can be a little tempermental but I have found that it is generally very reliable and although the Levenger F is more of an M these pens are comfortable to use and of very good quality. They are reasonably priced and in my opinion a good addition to the collection of any fountain pen user.

Paper is Rhodia Bloc No 16: 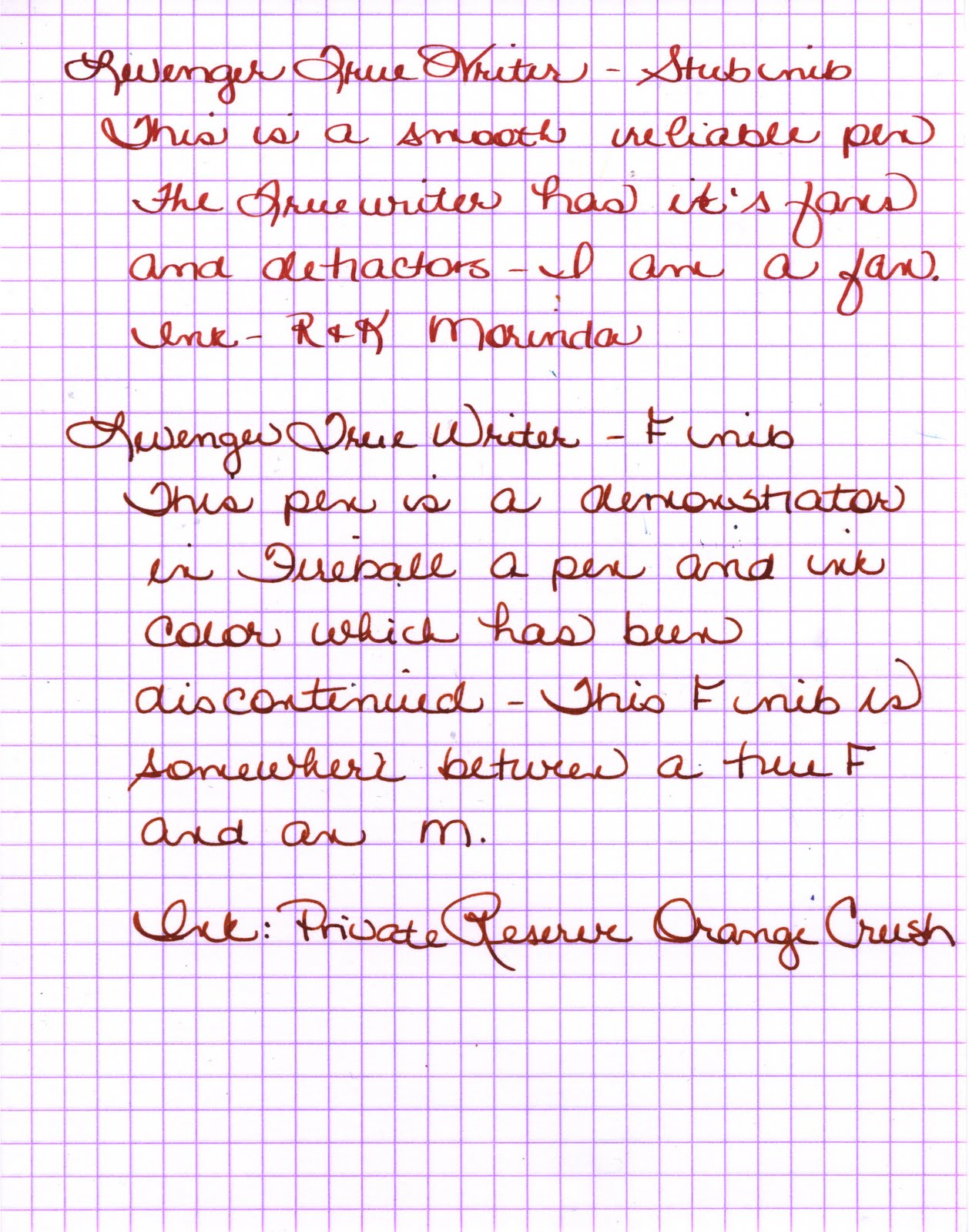 "There is no psychiatrist in the world like a puppy licking your face." ~ Ben Williams

My social media sites Via Gravatar

Blessed are they that do his commandments, that they may have right
to the tree of life, and may enter in through the gates into the city.
For without are dogs, and sorcerers, and whoremongers, and murderers,
and idolaters, and whosoever loveth and maketh a lie. Revelation 22:14-15

I haven't tried a True Writer pen yet, but I just wanted to say that your handwriting is beautiful!

Good review and great pics! You have very nice hand writing too.

I have several Levenger pens, but not the True Writers. I think all their pens are a little expensive if buying them brand new from the website. But, like you said, their ebay outlet usually has really good deals. That's where I bought all mine.

I have three True Writers:
A Fireball Demo like the picture. It was my first. ordered it with the F nib.
Metalist in Amythist. The colour was different than showed on line but not objectionable. It is a lot heavier than the Demo. Got it with the M nib. Had trouble with it at first not wanting to ink when first hitting the paper. Customer Service sent me a new one with no hassle. Worked fine.
Kyoto with an F nib. This nib is a lot finer that the F in the Demo. Not sure why.
I have no complaints with any of the three and try to write with them on a daily basis. I bought all on sale and will probably buy a couple more if the price is right.

Great review! I have the Amethyst version of the demonstrator and like it a lot.

I'm a long-time fan of Levengers and have the pens (and way too much other stuff) to prove it.

They are very reliable writers and some of them are always in my rotation.

My one complaint about Levengers is how fast they will discontinue something. I still regret hesitating over the beautiful Starry Night. It's the one the got away...

(And I agree about the Ebay Outlet - wonderful resource!)

"He was born with the gift of laughter and a sense that the world was mad." - Scaramouche by Rafael Sabatini
Back to Fountain Pen Reviews