I have just bought a beautiful Chilton Long island. Wonderful color, black with brown sprinkled with gold dust, something like leaves floating on the deep black. I don't know the name of this color. I was wondering about the other celluloid colors offered by Chilton. Are there some good pictures avalaible on the net, or some ads from the 30's ?

Edited : I have juste found this one : http://www.penlovers...e...s&s=chilton

There is a dearth of information on Chiltons in general. There are some ads about, but the only catalog I know of is the 1937 Wingflow catalog (although I've heard that there are two versions of this).

The one that you describe sounds like a black/bronze. I've forgotten the number associated with that color.

There are a number of colors missing on the site that you linked to, such as bronze/cream, burgundy with black veins, royal blue Wingflow, and there's even a bright blue pen that may or may not be a late Wingflow. Edit: There is also the Chilton "Clown" or harlequin, which AFAIK is unique to Chilton, and a Persian celluloid that's seen in some Waterman pens. I'm still probably forgetting some.

Incidentally, one of the pens pictured on the site that you linked to was probably not a Chilton, strictly speaking. The one that says "Private Brand" was most likely a Seth Crocker. The end cap has a slightly different shape, and that's not one of the plastics Chilton used. The Seth Crocker's are interesting, because it's a brand formed by Seth Chilton Crocker at a point where he was no longer involved with the running of the Chilton Pen Company. Many of the Seth Crocker pens have analogs in the Chilton line, probably due to the close relationship of the companies (both were founded by the same man) but that particular plastic was unique to Seth Crocker, as far as I know.

you can find long island series Chiltons in these colors, of course, some of them are harder to find than others...

shoot, I'm missing a picture of the green marble with black veins.

Thanks for showing these all together - a great spread! I'm still waiting to find a clown pattern sitting in the bottom of a shoe box at an antique mall. Probably, I'll still be waiting twenty years from now.

Thanks for the colors. My Long Island is reviewed here (in french) with pictures made by Carlos Sanchez Alamo. It's a black and bronze. I worked on the colors of his pictures to match those of the pen.

Which colors are harder to find ?

I've got you covered. One green marble with black veins coming up. Do you want fries or cole slaw with that?

Of course, you're also missing this one...

This was a DC pen show find. Black with red and gray veins. I hadn't even heard of a Chilton in this plastic, but the pen that matches this pencil is now very high on my want list.

The one that seems to be missing is the green version of this color. Green and black, but not veined. I've got a couple of Seth Crockers in that color (Seth Crocker also used the color above), but don't think that I've got a Chilton in the straight green and black.

ahh... the one between the clown/harlequin color and the chartreuse and red vein (carnelian) That is one variation of the color, but yes, there is a second vairation that looks like the black and burgundy.

Here's a picture of them together... 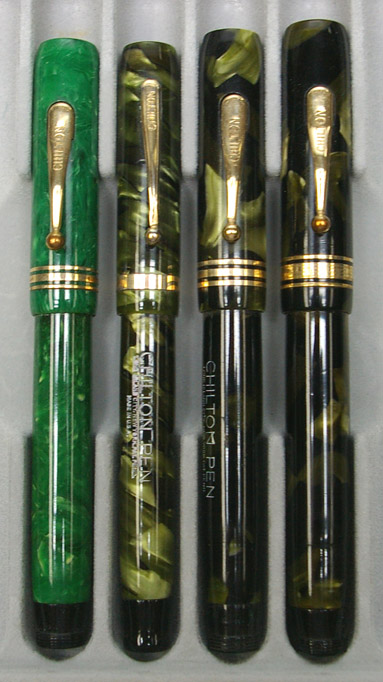