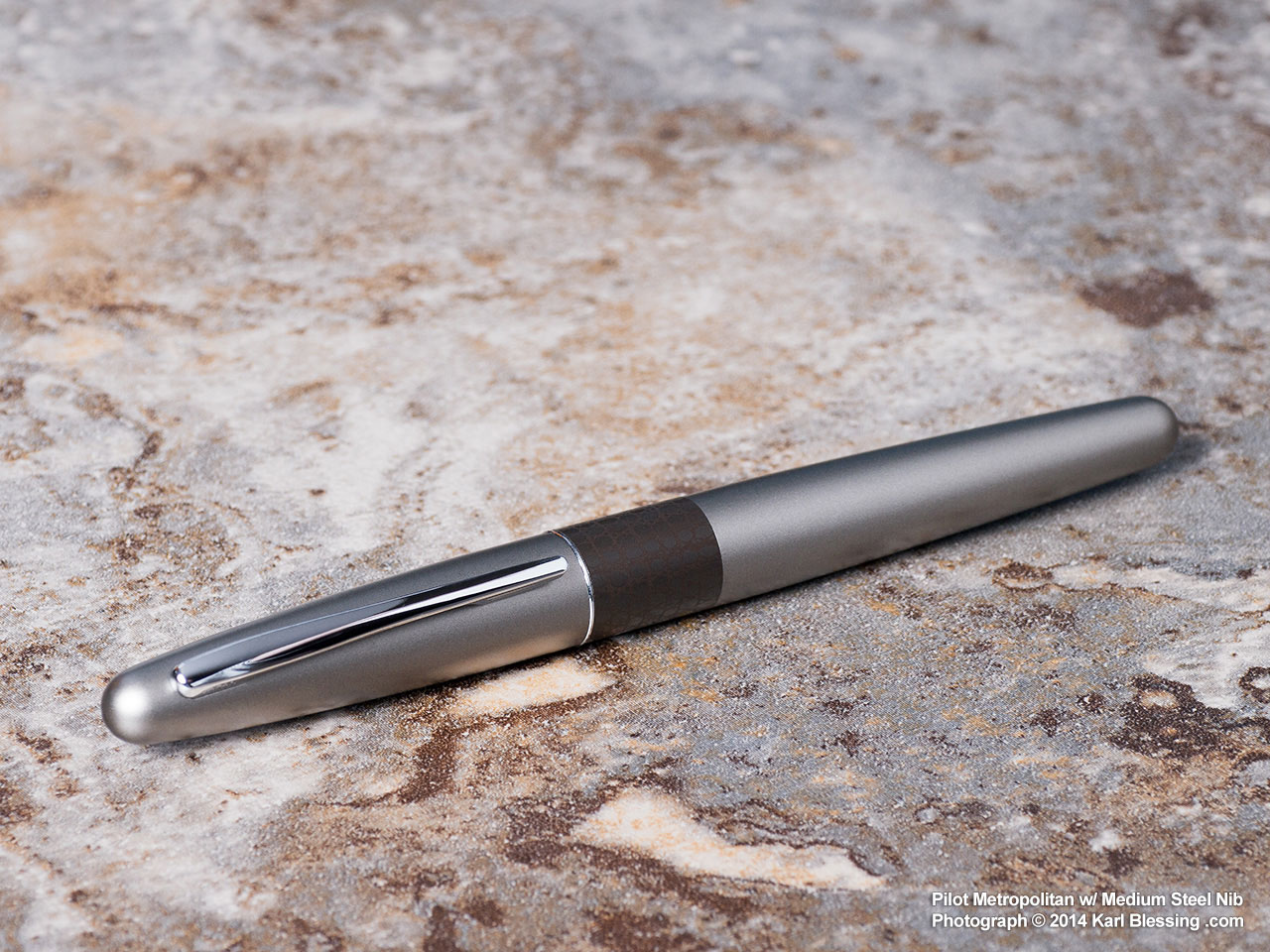 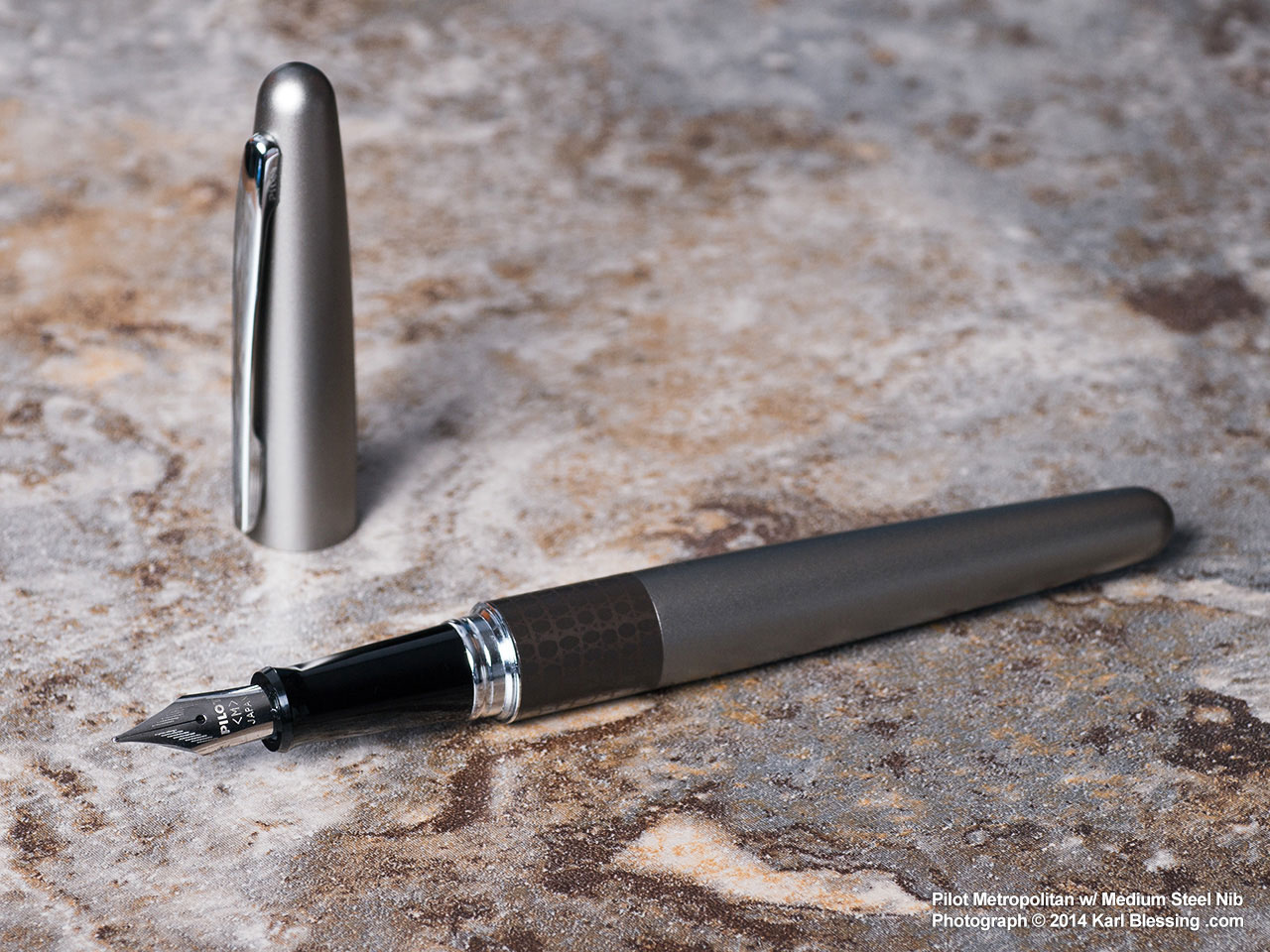 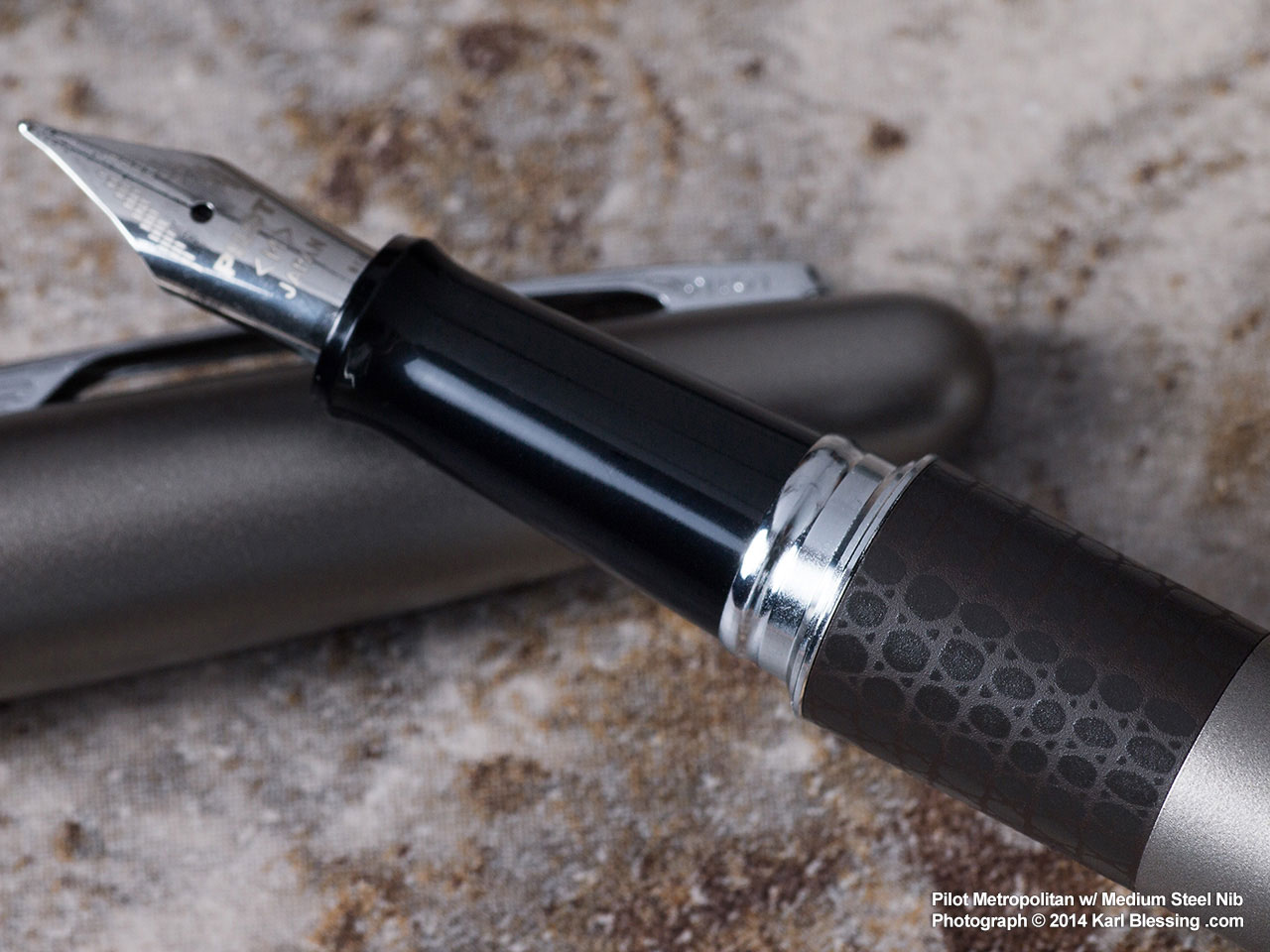 Got this earlier today (or well... yesterday), the original goal was to get a 78G (which I already got) with a Broad Stub, then get a Pilot Metro and then swap the nib... But I'm actually liking the medium that comes with it, just a tiny bit smoother than the medium that comes with the 78G (both seem to have identical line thickness). The nib is a little on the soft side so it's pretty comfortable to write with.

The matte body is rather comfortable and doesn't leave traces of fingerprints and such.

The 'leather' doesn't have a texture like leather, it's kind of has that flat feedback when you rub it, but the pattern itself is basically an extremely subtle emboss where the lines are, probably a little more subtle than the ridge you'd feel in between that band and the rest of the barrel (it's not perfectly flush, but rather a very tiny ridge detail can be felt). 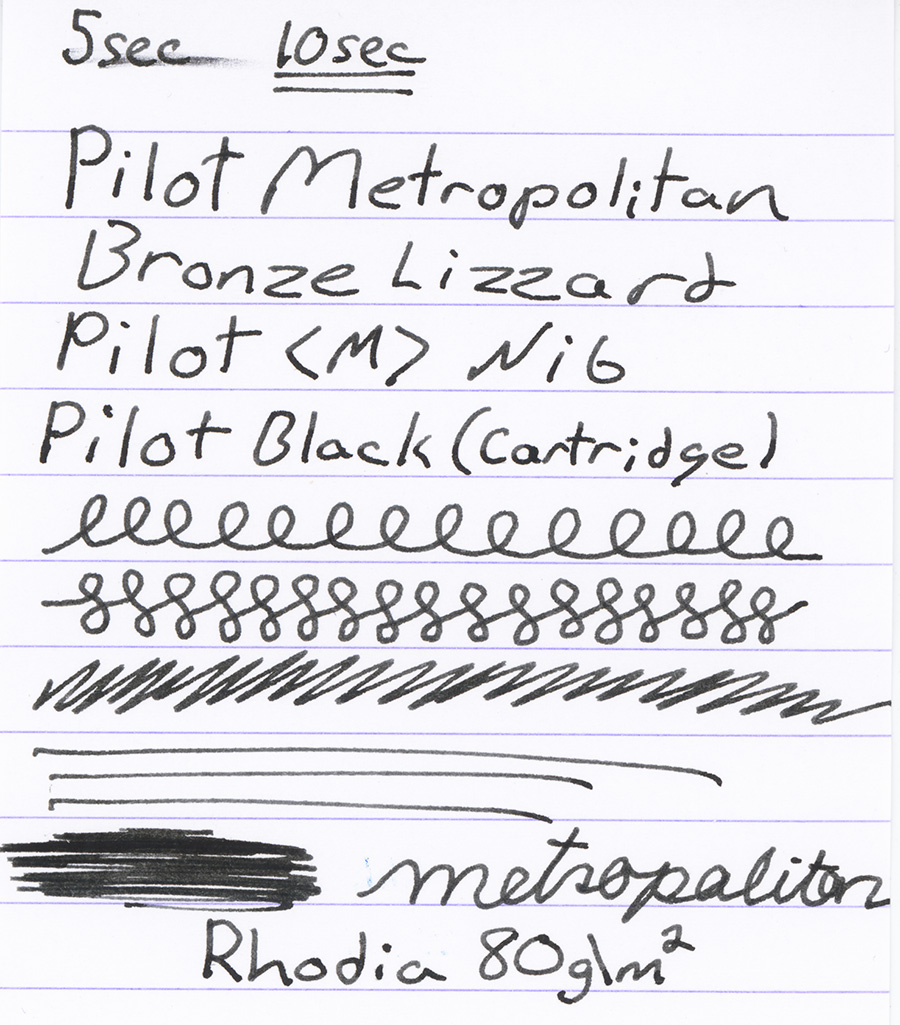 My only annoyance is the cap, has a habit of slipping right off the end when posting it, and I've already dropped the cap like 4 times today from it slipping out of my hands, either bouncing around off the desk or floor.

Should have my CON-50 converter sometimes Friday.

To confirm what someone else was saying, yes, you can interchange the nib, feed and section between the Metropolitan and 78G (though the metro doesn't look that great with a Green or Teal section

I have a Bronze Lizard as well as a Black Metro and love them both.  Also, I have a black 78G with a fine nib and it has the same section as the Metro.  Very quick and easy to swap.

Author of "The Fountain Pen Book" on Amazon.com.

I just ordered one of these in silver. I really like my AHAB, we shall see how this goes. Should be here tomorrow.

Man, you're really good with the camera!!!

Your pictures make me wanna buy pens I wouldn't even consider.

Man, you're really good with the camera!!!

Your pictures make me wanna buy pens I wouldn't even consider.

Thanks for the pics... I really like that color

Thanks for the pics... I really like that color

Speaking of which, I can't get the damn nib out of my Metropolitan. The feed/nib slide out pretty easily from my 78G, but my metro just ain't giving it up no matter how much I wiggle.

Edit: Got it, just a bit tight, using a rubber headed (I guess jewler's pliers) I gently turned the nib/feed unit and slowly guided it out. Course the Broad Stub from the 78G is unfortunately just as dry/thin on the metro ( I guess cuz the feed is identical ).

Sometimes they are difficult. I bought a couple of BB 78G's & swapped the nib on one of my Metro's. The BB nib just feels better on the Metro...of course it could be in my head 😜

The Plumix nibs are siver color & the 78G's are gold in color. I'm fairly certain that they are the same nibs.

You guys are giving me ideas about nib swapping

You guys are giving me ideas about nib swapping


Swappable nibs is one of the big reasons why I like the low cost Pilots, you can get the pen body you want along with the nib you want if you're willing to buy them and do the swap, the compatible pens list is pretty big so odds are there's a cheap nib out there in your favorite size (Plumix italic, Penmanship EF, 78G, Metropolitan/MR/Cocoon, Knight, Prera, I think also Cavalier).

May I compliment you on your photography skills, you take some superb photos

That's such a nice pen... Looks like I need to do some more shopping. At least it won't cost too much.

If Metropolitan is kind of the import name, may want to look around for a MR which is the same pen (but depending on geographic market, may take internationals standard instead of pilot cartridges). Not sure if there's a price difference between those two .

If Metropolitan is kind of the import name, may want to look around for a MR which is the same pen (but depending on geographic market, may take internationals standard instead of pilot cartridges). Not sure if there's a price difference between those two .

Yeah £17 is what the MR goes for. It's kind of frustrating as this year is meant a year of not buying pens for me. As last year I was a bit over enthusiastic about getting into to hobby so brought pens which were in retrospect were not really needed to get my collection off the ground and I wasted perhaps £80.

In some ways this has been a good thing as the only two pens I have brought I really wanted and are useful to have. A new Frontier which has become my EDC pen and a Diplomat which I have wanted for the last six months. It remains to be seen if the Diplomat will live up to it's good reputation.

So know really only have one purchase left of the year and I would rather leave till the 3rd or 4th quarter. However I really like the look of your Metro so I will have consider buying one when the time comes.

You got away easy!

You got away easy!

That was the eighty pounds I regret however that ignoring the other £120 I can just about justify.

It has been more than a year since last post.  I wonder whether everyone still using their Pilot Metro/MR or has everyone moved on to better FPs....  I am new to Pilot MR after more years that I can remember of not using FP.  I do remember a brief stint with Pilot 78g, wish I can find that again.  And no I am not into collecting FPs, just like to keep a few around me that I can use.  Now I am using my Pilot MR with F nib from Plumix while the donor Plumix runs the M nib from Pilot MR.  Their combined value to me exceed their prices a few times over I believe.

with current exchange rate I paid USD15 in local currency for both pens!   Yeah things are cheaper ere if they can be found.  Market if almost non-existent so it takes some actual active search to find something like Pilot MR.  I know for a fact that the Plumix equivalent had been in that shop for years and packaged as Pilot Calligraphy

I've sold or given away my Metropolitan(s). And for a short while the Pilot Petit1 was my cheap Pilot pen (which ended up being gifted away to people I've converted to FP users), and for a while I didn't really have anything that was really considered 'cheap' outside of say vintage pens I restored myself like a Parker 45.

Presently due to curiosity, I picked up a Platinum Preppy 05/M (with a nib tip that actually measures to 0.9 and writes more broadly than my Pelikan broad), to be used as an eye dropper for Noodler's Kung Te-Cheng (basically dedicated to that so if anything does happen to it, it's not a major loss), followed by a Lamy Safari which was already married to baystate blue and got shipped to me with the bottle (so chance of something happening to it is nil as long as it stays with BSB inked, but I got that more cuz the price was good enough to try BSB without risking my other pens).

I still think the Metropolitan is probably one of the best modern/current pen you can get for $15 or so, but where I'm at now, I would attempt to score a Parker 45, Eversharp Skyline or some similar vintage for around $15 to $20 and clean it up.

Can see where I ended up pen-wise in this list I keep updated every so often.

PS: I've had a Penmanship before, it's about $7 or so from JStationery, it's a nice extra-fine that can be swapped into the Metro. Ended up selling one of the Metropolitans with the Penmanship's EF in it. I also briefly owned a Pilot Prera with a CM.