Cute Pens For Us Girls!

275 replies to this topic

But most pens are not really girl-friendly.

Pens are equally used by both men and women, but it seems that the pens I see are mostly geared toward men in design. Colours are sombre, rather robust and bulky in design, without much fanciful decorations. You do get an occasional one like Marlene Dietrich, but those are very rare (there are pink Pelikanos and such, but I don't think corporate women would want to be seen with those...).

So ladies! What is your "pen design" wish? Something thinner, or with filigreed barrel, or more colours? I personally want a thinner pen in brighter colours (yes, yes, I know there are Safaris, but the design of the pen isn't really... nice). Maybe a fleur-de-lis on the clip.

I'm not a lady, but what about the feminine Parker Sonnets? They come in white lacquer with pink gold trim or pink gold with chrome trim, and to my male eyes they look suitably ladylike.

Never occurred to me that pens had gender.

I`m not a girl- but if i were, i would probably fancy the waterman ici et la, which looks very..."girl-friendly"- doesn`t have a mirror installed, though.

And how about the lovely sheaffer miss universe, or lady sheaffer, her adorable niece ?

And by the way, i would use pink ink- if i could find some for sale in stores !

Gatz: A journal for each of life's journeys.

This one is sheer class, the Audrey Hepburn pen, by S.T. Dupont.

With matching bag and lighter.

Long reign the House of Belmont.

I was also hoping to find an FSM fountain pen, but it seems that I can only find Buddhist, Hindu, Christian, and Islamic themes.

The BIC people seem to have this all swen up.  The customer reviews at Amazon have been posted already

Your cause may be hopeless. BIC was mocked when it came out with the BIC Cristal For Her Ball Pen. http://www.amazon.co...k/dp/B004F9QBE6 (see the comments - some are really funny).

But after that I don't think any mainstream pen maker would come out with a cute pen for "yous" girls. You just might be stuck with manly pens.

Pelikan M320 Ruby? I saw one at the Boston Pen Show. Probably the cutest thing ever, in terms of a serious, high-end pen at least. I mean, look at it...Image is from DaveyB's blog.

This one is sheer class, the Audrey Hepburn pen, by S.T. Dupont.

With matching bag and lighter.

Otherwise - this is no cheap thrill.....

I'm a guy, but I'm a fan of Pilot/Sailor/Platinum's 70's ladies pens.  I can't say they're "cute" per se, but they certainly live up to their name.

You might want to look on eBay for Crocodile brand pens.

I bought this one a few years ago, and next to it is a Pilot Petit1, which would be an ideal purse pen. I can't find that pen any more on eBay, but there are some other nice Crocodile brand pens, like this one -- 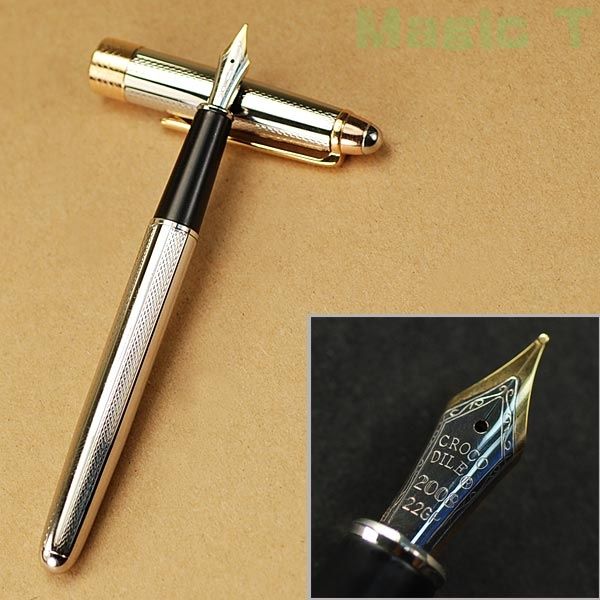 How about a slim, stylish and elegant Caran d'Ache Ecridor Éclat?

Whoops, accidentally linked a ballpoint version of that pen - it comes in a fountain pen version as well.

For low end, I just got a Noodler's Flex Piston Creaper in Vulcan's Coral, which is really more of a soft mottled pink.  I also thought of the Hello Kitty pen: someone posted a picture of one last year and it's a really nice (if very bright) pink; but the one on Ebay was around $300 -- and then

of course there's the "Hello Kitty" part, which was a complete and utter turn off, as far as I was concerned....

I gather from the most recent Goulet Communique that pink Lamy Safaris are back on the horizon; if I didn't hate the grip on Safaris so much I'd actually consider getting one.

For high end, there's the Yard-o-Led Viceroy Victorian Pocket Pen (which is, I believe, smaller and slimmer than the standard size VV).  The hammered floral design is really pretty, and as a sterling silver pen it's also classy looking.  Can't afford one myself; although if I could I'd be more likely to go for the Standard myself, simply because the Pocket Pen only takes cartridges (it's apparently too small to fit a converter

Of course if you're looking at pens in *sort* of "girly" colors, there's the Parker 51 Aerometric in Plum; mine is apparently a Demi, because it's a little shorter than my Midnight Blue Aero.  I wanted one mostly for the color (and of course 'cause it's a 51) and less because of the relative rarity compared to other colors in the line.

Come to think, some of the colors of Parker Vectors I've seen on Ebay were sort of girly, too: the pink ones were nice (although pricy compared to some other colors) and there's a sort of off-white color

(don't remember offhand what it's called), and the Jade Green was attractive and more "feminine" looking IMO.

Although I'm probably the wrong person to be answering this thread.  I was always a tomboy growing up, and played with my brother's toy trucks as much as -- or possibly more than -- my (fake) Barbie.

You might want to look on eBay for Crocodile brand pens.
I bought this one a few years ago, and next to it is a Pilot Petit1, which would be an ideal purse pen.

I can't find that pen any more on eBay, but there are some other nice Crocodile brand pens, like this one --


I think that's a Picasso rather than a crocodile.
And if it is, I have a red one I like a lot

I don't follow European or American brands really, so here are what come to mind...

Tombow has the Object, I think.
There are many others that don't spring to mind. If European companies are failing to appeal to the diverse tastes we attribute somewhat unfairly to gender/sex, then stop looking in Europe.

The Duke Ruby (and Sapphire, but I prefer the look of the Ruby) has a beautiful filigree design that looks pretty feminine.

Also tagged with one or more of these keywords: cute, colourful, pens, girls, females